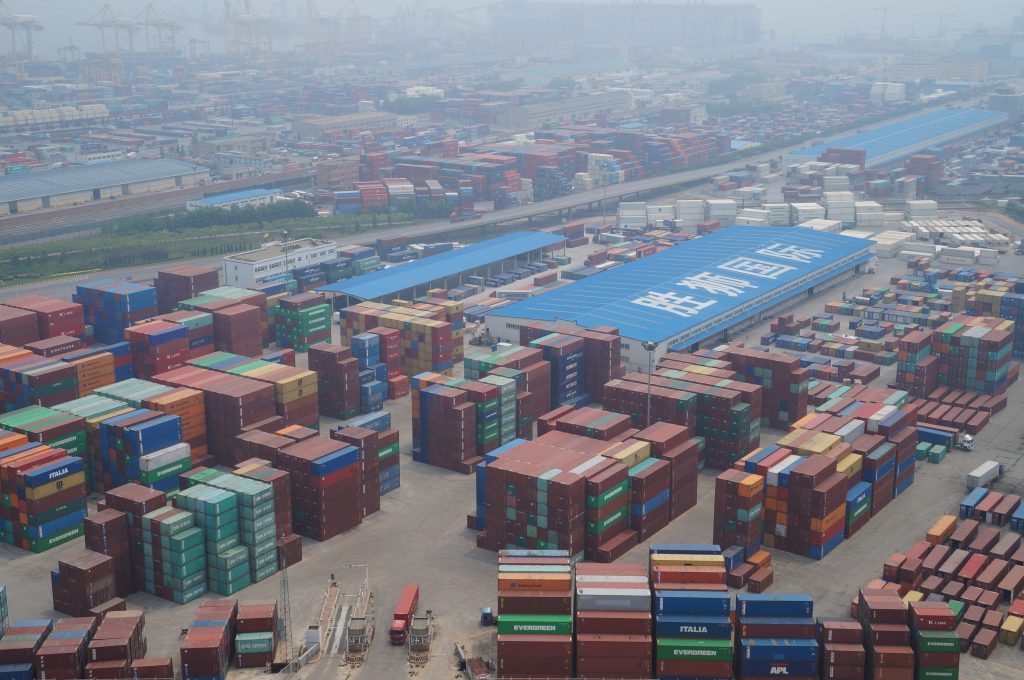 BEIJING/WASHINGTON (Reuters) – The United States and China escalated their acrimonious trade war on Thursday, implementing punitive 25 percent tariffs on $16 billion worth of each other’s goods, even as mid-level officials from both sides resumed talks in Washington.

The world’s two largest economies have now slapped tit-for-tat tariffs on a combined $100 billion of products since early July, with more in the pipeline, adding to risks to global economic growth.

China’s Commerce Ministry said Washington was “remaining obstinate” by implementing the latest tariffs, which kicked in on both sides as scheduled at 12:01 p.m. in Beijing (12:01 a.m. EDT/0401 GMT).

“China resolutely opposes this, and will continue to take necessary countermeasures,” it said in a brief statement, adding that Beijing will file a complaint over the latest tariffs with the World Trade Organization.

The tariffs, scheduled weeks ago, did not interfere with the start of a second day of trade talks in Washington led by Chinese Commerce Vice Minister Wang Shouwen and David Malpass, the U.S. Treasury under secretary for international affairs.

Wang, asked by a Reuters reporter how the talks were progressing, declined to comment as he and his delegation entered the U.S. Treasury building on Thursday morning.

President Donald Trump has threatened to put duties on almost all of the more than $500 billion of Chinese goods exported to the United States annually unless Beijing agrees to sweeping changes to its intellectual property practices, industrial subsidy programs and tariff structures, and buys more American goods.

That figure would be far more than China imports from the United States, raising concerns that Beijing could consider other forms of retaliation, such as making life more difficult for American companies in China or allowing its yuan currency to weaken further to support its exporters.

“WE HAVE MORE BULLETS”

Trump administration officials have been divided over how hard to press Beijing, but the White House appears to believe it is winning the trade war as China’s economy slows and its stock markets tumble.

“They’re not going to give that up easily. Naturally they’ll retaliate a little bit,” U.S. Commerce Secretary Wilbur Ross said on CNBC on Wednesday at a Century Aluminum Co (CENX.O) smelter in Kentucky that has benefited from Trump’s aluminum tariffs.

“But at the end of the day, we have many more bullets than they do. They know it. We have a much stronger economy than they have, they know that too,” Ross said.

Economists reckon that every $100 billion of imports hit by tariffs would reduce global trade by around 0.5 percent.

They have assumed a direct impact on China’s economic growth in 2018 of 0.1 to 0.3 percentage points, and somewhat less for the United States, but the impact will be bigger next year, along with collateral damage for other countries and companies tied into China’s global supply chains.

The two days of talks in Washington were the first formal negotiations since Ross met with Chinese economic adviser Liu He in Beijing in June.

Business groups expressed hope that the meeting would mark the start of serious negotiations over Chinese trade and economic policy changes demanded by Trump.

However, Trump on Monday told Reuters in an interview that he did not “anticipate much” from this week’s talks.

The U.S. president’s hard line has rattled Beijing and spurred rare criticism within the highest levels of China’s ruling Communist Party over its handling of the trade dispute, sources have said.

Beijing has denied U.S. allegations that it systematically forces the unfair transfer of U.S. technology and has said that it adheres to World Trade Organization rules.

Foreign Ministry spokesman Lu Kang would not reveal any details of the talks during a daily news briefing.

“We hope that the U.S. side can meet China halfway, and with a rational, pragmatic attitude, conscientiously with China get a good result,” Lu said.

Washington’s latest tariffs apply to 279 product categories, including semiconductors, plastics, chemicals and railway equipment, that the Office of the U.S. Trade Representative has said benefit from Beijing’s “Made in China 2025” industrial plan to make China competitive in high-tech industries.

Though it is too early for trade damage to show up in much economic data as yet, tariffs are beginning to increase costs for consumers and businesses on both sides of the Pacific, forcing companies to adjust their supply chains and pricing, with some U.S. companies looking to decrease their reliance on China.

One executive at a major U.S. manufacturer in China told Reuters the uncertainty about the trade conflict’s duration was more damaging than the tariffs themselves because it made business planning difficult.

If the tariffs are in place for a long while, there will come a point at which the company would begin moving some sourcing and production out of China, a process that would be irreversible for several years once set in motion, the executive said, declining to be identified due to the sensitivity of the matter.