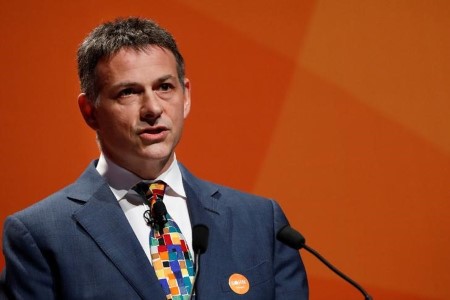 “Like Lehman, we think the deception is about to catch up to TSLA,” Einhorn’s firm Greenlight Capital, which has sold Tesla shares short, said in a quarterly investor letter obtained by Reuters. “Elon Musk’s erratic behavior suggests that he sees it the same way.”

Greenlight’s letter came one day after Musk, a longtime critic of short-sellers, appeared to taunt the U.S. Securities and Exchange Commission by calling it the “Shortseller Enrichment Commission” on Twitter.

That came just five days after Musk settled SEC fraud charges, in an accord that lets him remain Tesla’s chief executive but requires he step aside as chairman. A judge has yet to approve the settlement.

Tesla did not immediately respond to requests for comment. Its shares were down 7 percent at $262.05 in late afternoon trading.

Greenlight is having a difficult year, with its main fund down 25.7 percent through September, but said its Tesla short position was its second biggest winner in the third quarter.

In an investor presentation in May 2008, four months before Lehman went bankrupt, Einhorn had questioned the investment bank’s accounting, including for real estate, and said it needed to raise large amounts of capital.

Einhorn said Tesla has “many parallels” to Lehman, which he said “threatened short sellers, refused to raise capital (it even bought back stock), and management publicly suggested it would go private.”

He said a big problem for Musk is that Tesla would lose too much money targeting a mass audience by selling its Model 3 at a $35,000 starting price, and yet “can’t bring himself” to cancel the program and refund customer deposits.

“His conduct suggests that he is doing his best to be relieved of his position as CEO to avoid accountability,” Einhorn said.

Musk, for his part, has used Twitter to mock Einhorn, saying on Aug. 1 he would “send Einhorn a box of short shorts to comfort him through this difficult time.”

Greenlight said it also sold its last Apple Inc (AAPL.O) shares in August at $228 per share, eight years after buying the iPhone maker at less than one-sixth that price, on growing fear of “Chinese retaliation against America’s trade policies.

Apple did not immediately respond to a request for comment. Its shares were down 1.4 percent at $224.71 late Friday.