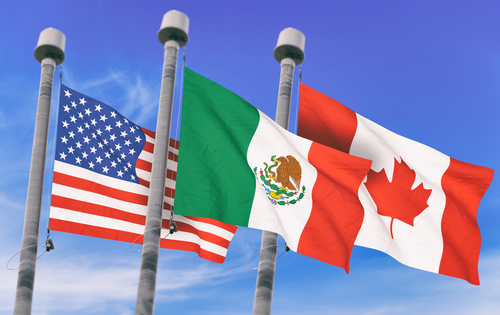 US President Donald Trump and leaders from Canada and Mexico have signed the successor to the North American Free Trade Agreement (Nafta).

The revised deal has been renamed as the United States-Mexico-Canada Agreement, or USMCA.

Renegotiating Nafta was a key pledge of Mr Trump’s 2016 White House campaign. The US President claimed the update “changes the trade landscape forever”.

USMCA will govern more than $1tn worth of trade between the countries.

Shortly after the signing, Mr Trump tweeted: “The terrible NAFTA will soon be gone. The USMCA will be fantastic for all!”

The deal comes after more than a year of negotiations between the parties, with agreement on new car and dairy industry regulations proving particularly challenging.

Throughout the start of his presidency, President Trump had repeatedly threatened to withdraw the US from Nafta, unless he could secure a better deal.

However, after a deal was agreed in principle on 30 September, Mexican President Pena Nieto hailed it as a “win-win-win.”

Canadian Prime Minister Justin Trudeau was less enthusiastic about the new regional trade pact on Friday, but said the USMCA would resolve the threat of “serious economic uncertainty” that “would have gotten more damaging”.

In May this year, President Trump slapped increased tariffs on Canadian and Mexican steel and aluminium coming into the US.

Mr Trudeau told Trump at the signing that the two leaders should work together to reduce those tariffs.

Politicians from each country will still need to ratify the USMCA before it can take effect.

The head of the World Trade Organization, Roberto Azevedo, has said the post-war multilateral trading system is facing its worst crisis.

He sounded the alarm in a BBC interview, where he did not name names, but it’s pretty clear that President Trump’s combative approach to trade policy is at the centre of his concerns.

The signing of the deal to replace the North American Free Trade Agreement – even though it still needs to be ratified by all three countries legislators – does perhaps tick off one item on the list that Mr Azevedo is worrying about.

But there are plenty more. The big one must be the continuing tensions between the US and China. The two countries have already imposed new tariffs on one another’s goods and the US plans to raise them further in the New Year.

Perhaps President Trump and his Chinese counterpart Xi Jinping will defuse the situation when they meet at the G20 summit this weekend. But expectations are not very high.