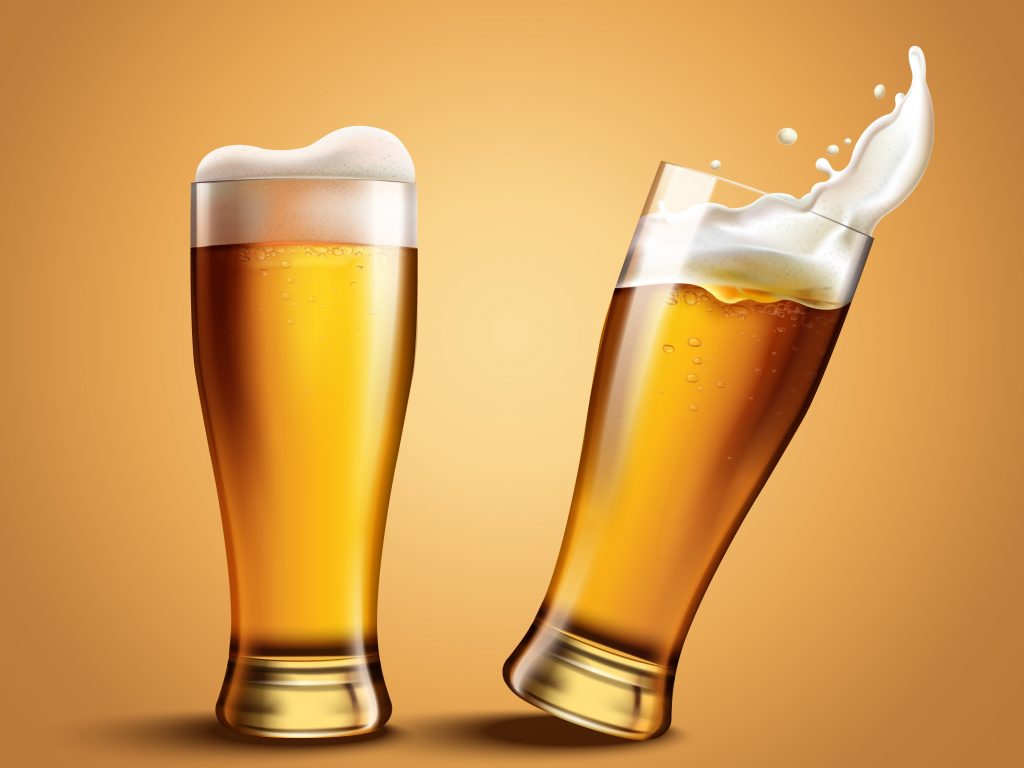 WHAT BEER WANTS to know is, why do you hate America? How can you just sit in front of the game on Super Bowl Sunday, ice cold domestic lager close to hand, and not consider the future of that great institution? No, not the Super Bowl—the beer. Beer is America. Americans drank 2.9 billion cases in 2017, more than any other alcoholic beverage. It’s true, sales look to be going down, and prices look to be going up. But beer has an even more existential problem.

You can’t have beer without four things: water, yeast, hops, and barley. The water is the medium; bitter hops and alcohol-making yeast are the message. Barley is the substrate. It’s a grass, an agricultural product—Hordeum vulgare. Its seeds, barleycorns, are full of starch, which is really just chains of sugar. Break those chains and yeast, the most incidentally miraculous lifeform this side of the Babel fish, will eat the sugar and excrete alcohol. That, children, is where beer comes from. But when plants make that transition from “thing that grows over there sometimes” to “crop that humans obsessively cultivate,” they get finicky. To grow the quantities necessary for beer to exist—almost 142 million bushels in 2017—the various barley-growing regions around the world need water (not too little but not too much), relatively cool temperatures (heat and humidity make barley more prone to disease), and not so many stalk-knocking-down storms.

Climate change kicks over those building blocks. It makes droughts and heat waves more common. Under those conditions, barley does poorly. Seed yield goes down as much as 95 percent. Levels of a starch called beta-glucan go up, making the sugar-water that gets fermented into beer too gloppy. The proteins in the seeds get all weird—too much, and there’s not enough starch to make into beer. Too little, and there’s not enough enzyme to break the starch into sugar to feed the yeast.

Worst case? If people don’t stopburning so much carbon-based fossil fuel and emitting greenhouse gases, world beer consumption could drop by 16 percent, and the price of a beer worldwide could double. If my math’s right and you drink the US per-capita 73.4 liters of beer in this climatically changed world, you can expect to pay an extra $400 each year.

If you loved beer—if you loved America—you’d demand global decarbonization. You’d think of the barley.

But, right, I get it, the commercial’s over, the Pats are patting, the Rams are ramming. While you’re otherwise engaged, Big Beer is taking steps. Moving the ball down the field. Covering yardage. Sportily metaphoring. This week, the transnational brewing conglomerate Anheuser-Busch InBev, the largest brewer in the world, maker of Budweiser, Corona, Stella Artois, Modelo, Hoegaarden, Bass, oh my gosh so many beers, announced a partnership with the small biotech company Benson Hill Biosystems. AB InBev will contribute genetic information on the myriad barley strains in its library, and on their various traits—their genotypes and phenotypes—and Benson Hill Biosystems will use its software to pick through all those genes and suggest strains that might make sense to cross together.

It’s called directed breeding—using genomic information to jump the queue of traditional, years-long breeding techniques. “In Idaho we have issues with the amount of snowpack and the water in reservoirs. In Mexico we’re dealing with six or seven inches of rain a year, half of what we get in Idaho. In India we’re dealing with plus-100-degree temperatures,” says Gary Hanning, director of global barley research at AB InBev. “The climate today drives disease pressure, drives environmental stresses, and they will change in the future. As climate changes, we have to be ready for that so we have good barley production.”

Note that Hanning isn’t talking about how the beer tastes. Different kinds of barley can affect flavor in beer, but brewers typically ascribe flavor to yeast and hops. When folks like Hanning want to improve barley, they want to maintain or increase yield, the amount you can grow on a given plot of land. AB InBev already has tons of data and a giant breeding program, says Matt Crisp, CEO and cofounder of Benson Hill Biosystems. But that program might be overlooking hints of potential super-charged barley strains hidden in the data. “When you layer on top of that an analytics capacity that looks at the entire genomic universe of barley, it’s able to extract deeper information,” Crisp says.

Maybe more importantly, it has the potential to do it faster. Traditional breeding and evaluating a new strain of a crop can take years, even decades. “It’s an integration of phenotype data, which AB InBev is generating constantly and in abundance because they breed constantly all over the world, with genotype data,” says Patrick Hayes, a barley geneticist at Oregon State University. “That allows for design of crosses and selection of progeny based on their genome architecture and its predicted impact.”

Time, here, is also money. To take a small experimental plot of barley from seed to maturity, then measure its physical parameters, then malt it—that is, convert the starches to sugars—and do chemical analysis probably costs, all told, $200, Hayes says. But a company like AB InBev wants to do that thousands of times. Oh, and if you were only looking for phenotype, you might miss the almost-got-it strain that has most of the genes but not all of them. And if you were testing a low-temperature tolerant strain of barley in the American Midwest this week? The very, very subzero polar vortex weather killed it. It’s dead. You’d have to start over. A more data-driven approach helps sidestep all those problems.

Ideally, anyway. “As a scientist, I would never guarantee anything,” Hanning says. AB InBev’s proprietary breeding program is one of the largest in the world—as is the one run by competitor MolsonCoors, not to mention the public ones. Most of the barley grown in the world goes to animal feed, but a lot goes to beer, and everyone in that business knows that sustaining this $500 billion-a-year market means ensuring the health of its main commodity by every possible means, from traditional breeding through machine learning-assisted genomics.

That’s true for more than barley, of course. Researchers have warned that wine grape-growing regions may shift, or vintners will have to redouble the same sort of efforts as barley growers are undertaking. Climate change stands to alter the way humans farm every plant we eat and every plant we feed to the animals we eat. If you’re sure you’re gonna want another beer? Now’s a good time to think about saving the world.