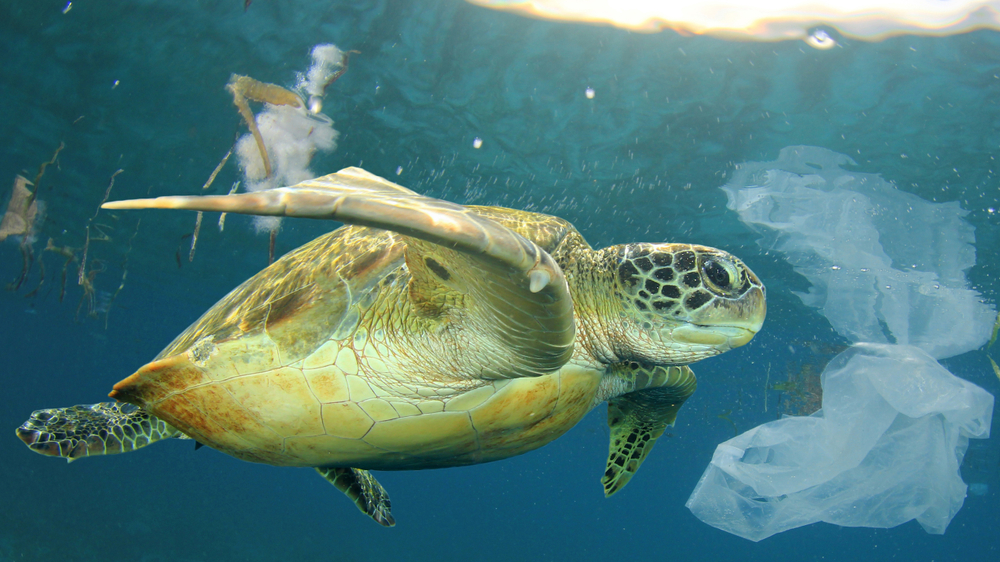 Is the Fight Against Ocean Plastic Distracting Us From Bigger, Deadlier Problems?

The ocean is heating up, acidifying, and rising. Should we spend our energy on that and not straws—or does any attention on the ocean help spread awareness?

A recent paper in the science journal Marine Policy asks if the current focus on plastic pollution is distracting society from even larger challenges facing the ocean, and if a focus on changing bottles or straws is distracting us from making more fundamental changes to the economy. As humans have pumped greenhouses gases into the atmosphere, almost all of the resulting heat has ended up in the ocean; as water gets hotter, that’s killing fish and coral reefs. The heat also leads to sea level rise and melts polar ice sheets, leading to even more sea level rise. Hurricanes are becoming more intense. Extra carbon dioxide is making oceans more acidic, so it’s harder for marine life to survive. At the same time, large-scale commercial fishing is decimating fish populations.

Plastic pollution may not pose the same critical level of threat to marine ecosystems as climate change or overfishing, argues marine scientist Richard Stafford, a professor at the U.K.’s Bournemouth University and author of the paper. He sees the corporate focus on plastic as a form of greenwashing. An airline can appear more sustainable if it bans plastic straws even if it’s not necessarily taking steps to reduce emissions from jet fuel. Consumers using reusable water bottles might see themselves as greener even as they board a long-haul flight between continents. “Looking at simple solutions [that] are consumer driven won’t really change the economics of the situation, which is probably what we really need to change to address the big issues,” Stafford says.

Of course, it doesn’t have to be a zero-sum game: More attention on ocean plastic doesn’t automatically mean less attention on climate change or the need for broader societal change. Starbucks already buys enough renewable energy to power its stores in the U.S. and Canada, and packaging—long a more visible sign of its environmental footprint — is a logical step to tackle in addition. Plastic production itself uses around 6 percent of global oil (as much as aviation) and is also a source of emissions; by 2050, it may account for 15 percent of the total global carbon budget. Moving from single-use plastic to circular economy models, like systems of reusable packaging for food or deodorant, can make a measurable impact on emissions.

Stafford argues that there’s some evidence that people tend to fixate on one environmental issue at the expense of others. But George Leonard, chief scientist for the nonprofit Ocean Conservancy, says that as the organization has seen more participation in its beach cleanup work and more interest in ocean plastic in general, it has led to an uptick in interest in other ocean issues. “[Plastic] has brought the overall issue of the health of the ocean to a much broader audience,” he says. “Most of the public don’t actually live by the ocean and experience the ocean. The global conversation around plastic has really raised awareness amongst them, but it has also raised this issue amongst decision makers.”

The nonprofit works on the top threats to the ocean, he says. “We don’t just work on plastic, because plastic isn’t the only thing that threatens the ocean. Nor are we institutionally hobbled, if you will, or distracted — our work on plastics doesn’t undermine our work on overfishing or on climate change, for example. We can walk and chew gum at the same time.” The evidence about the severity of plastic pollution continues to grow. We don’t yet understand the health impacts of the fact that microplastics are in fish, whales, tiny organisms, and hundreds of other marine animals — along with bottled water and beer — but a body of research is underway. The effects in nature can be synergistic. In coral reefs, climate change can accelerate disease, but one large 2018 study of coral reefs found that in areas with plastic waste, corals were much more likely to be sick.

Of course, it’s true that governments can theoretically also address multiple major environmental issues simultaneously, and advocates can also push for sweeping changes. But at a time when the environment faces multiple emergency-level threats, do we need to prioritize? We aren’t acting quickly enough on climate change. We aren’t acting quickly enough to stem massive losses of wildlife. Because we have only a short amount of time to act, would the energy spent on plastic activism be better spent more directly on climate change or biodiversity loss? Part of the challenge with an issue like climate is its complexity; littered water bottles on a beach are both more visible and seem easier to address than an overhaul of the entire economy to move to zero emissions.

Stafford argues that fundamental change is necessary — and that plastic also needs to be addressed at a more basic level than some solutions now, which propose swapping in new materials but still selling the same products in the same ways. The focus, he writes in the paper, “needs to be on making the way we live more sustainable by questioning our over-consumptive consumerist lifestyles, rather than a narrower focus on sustainable consumer choices — i.e., reform the way we live rather than tweak the choices we make.”