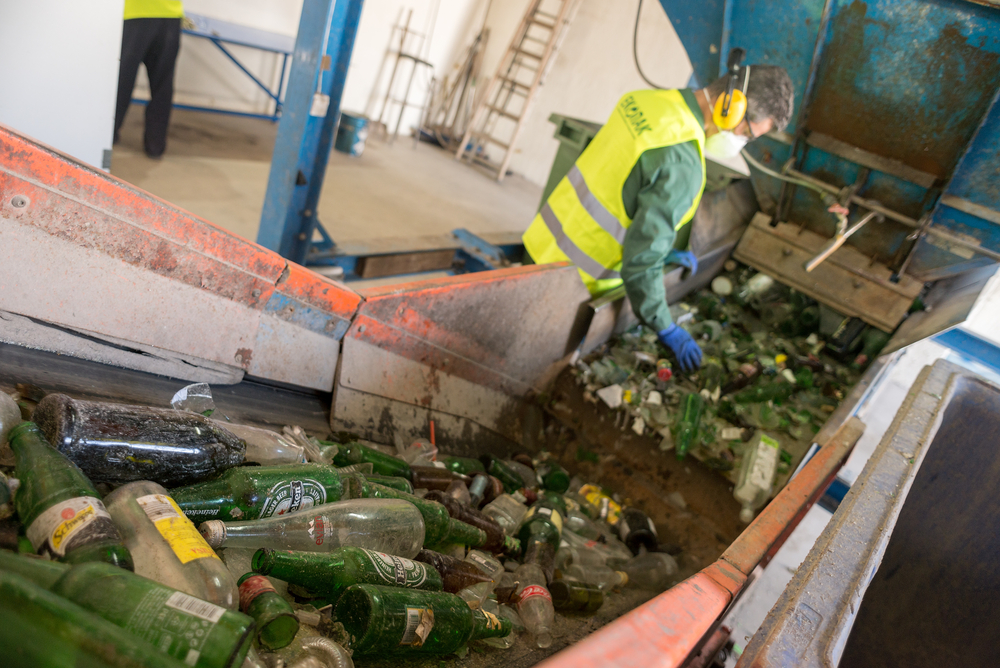 The EPA estimates Americans recycle about 90 million tons of material a year. But these days the stuff we recycle has to be purer than Ivory soap.

That’s because China, the world’s largest importer of recycled materials, instituted strict new standards on the quality of the products they’ll buy, and the impact is being felt near and far.

“In the Greater Boston area, 80 to 90 percent of our material had gone to China,” says Gretchen Carey, president of MassRecycle, a statewide industry organization.

She says the price for mixed paper, for instance, has dropped from $75 a ton to less than $5. The shift, she says, “basically took our entire world and shook it like a snow globe.”

The global glut of recycled materials has turned local municipal budgets upside down. Massachusetts cities and towns, which are are required to recycle household materials, are now scrambling to pay for something that used to turn a profit.

Part of the problem is the single-stream recycling process. After curb pickup, trucks bring the stuff in your bin to one of eight Municipal Recovery Facilities— or MRFs (pronounced “murfs”) — in Massachusetts. The one in Charlestown is run by Casella Waste Systems, and Bob Cappadona, vice president of recycling for Casella, says the vast MRF handles commercial and residential material collected from 75 communities as far as New Hampshire and Maine, and down to Cape Cod.

“Combined volume per year is about 210,000 tons, which makes it one of the top seven largest recycling facilities in the country,” says Cappadona. “Volume is good. People still like to recycle.”

In the past, the 420 million pounds of stuff that Casella handles at its Charlestown facility every year would easily cover the cost of sorting the materials and selling bales as commodities to overseas markets. Municipalities and processing companies would then split the profits.

Single stream has made recycling easy — perhaps too easy. Typically 25 percent of the stuff dumped at Casella’s Charlestown MRF should never have been tossed into a recycling bin, either because it’s contaminated with food (or worse) or just can’t be recycled. Sorting through the recycling waste stream is expensive and wastes time needed to process the material into mixed paper, plastics, glass and metals.

The recycling process at Massachusetts’ MRFs is designed to reduce contamination to 3 percent. But China’s new stricter “National Sword” policy demands that it be 0.5 percent.

So companies like Casella are trying hard to clean up their act. At the beginning of the recycling process, called pre-sort, workers with trained eyes and wire hooks survey a conveyor belt as an endless stream of materials flows past. Two shifts a day snatch contaminated stuff of all shapes, sizes and materials off the belt.

One item in four is what’s called “wishcycling”– objects that well-intentioned people put into recycling bins but should be trashed.

Dreaded tanglers are the worst. These are the flimsy plastic grocery bags more and more towns are banning. The bags gum up the MRF machinery and can bring a processing plant to a grinding halt.

The goal is to separate trash from cash.

“Every plastic has its own DNA,” says Cappadona. Plastic bottles are identified by an optical sorting machine, sorted by type of resin, and a pulse of air tosses it past a separation bar, where it is crunched and compressed into 1,600- to 2,000-pound bales.

Hard plastics, like those used to make detergent containers, are valuable. Yogurt cups, swished clean of food contamination, are OK. And you should recycle pizza boxes. A little grease on the cardboard is fine, but ditch the unfinished slices.

Cappadona points to a bin underneath a conveyor belt. It’s filled with metal objects like wires and coat racks. “It has a value, this will go out for scrap metal,” he says. But “the only thing we want to see is tin cans and aluminum in the curbside bins.”

Aluminum is the gold standard in recycling. The process saves 95 percent of the material and energy used to make a new can from scratch.

From Recycling Bins To Landfills

When China decided our recycled materials were not clean enough, commodity dealers began shipping bales to new overseas markets in Thailand, India and Vietnam. But now these countries are also rejecting them, so a lot of the stuff we put into our household bins now winds up in landfills.

Out of the more than 5.5 million tons of solid waste Massachusetts produces each year, only about 25 to 35 percent gets recycled. The rest goes to 12 active landfills in the state. But those sites are quickly filling up, and a third of the tonnage is trucked to Ohio, Pennsylvania and New York for disposal.

The dramatic market disruption has taken a toll on the entire industry. Casella’s revenue from recycling is down a third — $20 million a year. And municipalities that used to share the recyclers’ profits are now being asked to pay processors.

Gunther Wellenstein, the recycling coordinator for Lowell, says the city’s old contract had no cost for recycling and processing. Zero. The new contract could cost the city as much as $500,000 a year.

“Half a million can come out of public safety, public education, economic development,” says Wellenstein. “You have to pay for the increase in trash.”

New Bedford and its recycler, ABC Disposal Services, are mid-contract and suing each other over processing payments.

The situation has gotten so bad, says David Biderman, CEO of the Solid Waste Association of North America, that some cities around the country have stopped single stream curbside recycling altogether.

“For too long we’ve provided recycling as a free service,” says Biderman. “It’s an essential public service like fire and police. And the tough political question for local communities in Massachusetts and elsewhere is: Are you willing to tell your citizens that’s what we need to do to preserve recycling?”

One way to help turn things around is to create new markets for recycled materials. For example, as craft beer makers increasingly switch from glass bottles to aluminum cans, the value of recycled glass has dropped. A company in Milford used to make 2 million bottles a day out of the recycled glass, but it went out of business last year.

Now Massachusetts has started making grants to cities and local companies so they can buy grinders to turn the recycled glass into an aggregate to use for building sidewalks and roads, and filling potholes. But ultimately, it’s what we leave at the curb that will determine the fate and fortunes of recycling.