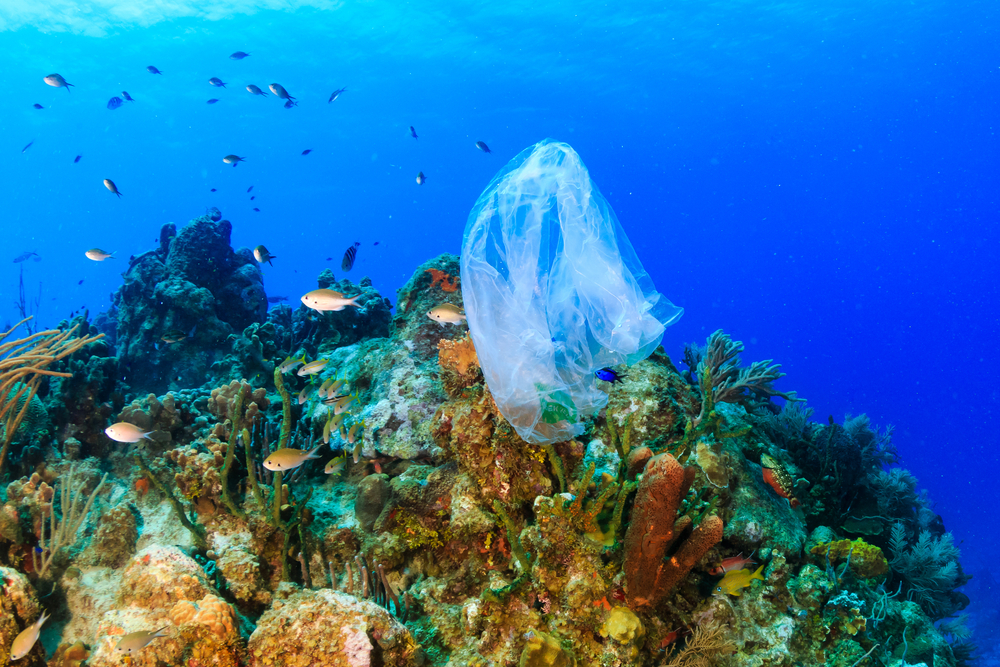 How to keep plastic out of the ocean

Plastic is kind of like a Twitter reply guy: It never goes away. And there’s more coming in.

Each year, 8 million metric tons of plastic go into the ocean (that’s equal to about one garbage truck per minute), according to a 2016 report by the World Economic Forum, the Ellen MacArthur Foundation, and McKinsey & Company.

“Plastic is a substance that once created essentially exists almost in perpetuity and just breaks down into smaller and smaller pieces in the environment,” says Graham Forbes, the global plastics project leader at Greenpeace, an international environmental organization.

It’s vital to pay attention to the plight of plastic and implement small changes in your daily life to keep plastic out of the world’s oceans. World Water Day may be Friday, but we should be working to minimize the harm of plastics every day.

Plastic pollution impacts sea creatures in a huge variety of ways. As National Geographic notes, about 700 species of marine animals have been found to eat or become ensnared by plastic. Sea turtles swallow it thinking it’s jellyfish. A whale was found with plastic bags in its stomach. Birds like albatrosses eat plastic believing it’s food, according to Smithsonian. And as marine biologist Matthew Savoca told National Geographic, anchovies eat algae-covered plastic because it smells like a meal.

Jacqueline Savitz, the chief policy officer for North America at Oceana, an ocean conservation nonprofit, says that “if we don’t figure out a way to turn the tide on plastic,” we’ll continue to poison these sea creatures.

But don’t panic … yet. “The good news is that there’s something everyone can do,” says Forbes. “A lot of people understand that it’s a problem and want to do something about it.”

Here are five ways you can help reduce the amount of plastic that’s produced, as well as keep the plastic that already exists out of the world’s oceans.

Be a conscious consumer and steer away from single-use plastic items. Instead, buy in bulk or opt for reusable items like bottles or cups. The impact of this choice extends beyond your own home: Your money has leverage. When you change your spending habits, companies and governments will start to pay attention, says Forbes.

To make a real impact, however, you’ll need to make sure you get the most from your reusable item.

“In the end, the key for those reusable materials, for them to truly be holistically environmentally better, is the actual reuse of them — many, many times,” says Erin Simon, the director for sustainability research and development at World Wildlife Fund.

It’s important that individuals do what they can to reduce plastic waste, but there also needs to be a systemic change, meaning big companies have to change the way they package their items.

“At some point, we have to shift and demand the big businesses creating all of this plastic, just produce less of it to begin with because a lot of it is just completely unnecessary,” says Forbes.

“I don’t want people to feel bad if they’re drinking out of a plastic container when they weren’t given a choice,” she says.

To hold large grocery retailers, in particular, accountable, Greenpeace recommends individuals complete this survey about the amount of plastic in their local grocery store. The data will help Greenpeace rank 20 top supermarkets based on their plastic usage. For tips on how to complete the survey, check out this toolkit.

The organization also suggests people deliver this sample letter to grocery store managers, which asks them to “introduce transparency by publishing yearly audits of single-use plastic use, set annual targets to reduce your single-use plastic footprint, eliminate unnecessary and non-recyclable plastic packaging in 2019, and invest in reuse and new delivery systems.”

If you don’t feel comfortable with in-person confrontations, Greenpeace suggests taking a photo of the excessive plastic on grocery store shelves and then posting it on social media, making sure to tag the company and add the hashtag #pointlessplastic.

Dianna Cohen, the CEO and co-founder of the Plastic Pollution Coalition, recommends people take part in a brand audit, which requires volunteers to record data about the trash collected at a community or beach cleanup, including the brand name and manufacturer of each plastic item.

“This tells us which companies are creating the most plastic pollution and helps us put pressure on those companies to reduce their plastic footprint on the Earth,” Cohen wrote in an email.

Change is going to occur where individuals have the most leverage: at the local level, Simon and Forbes say.

In fact, there’s already been some progress. In January, the Berkeley City Council passed a ban on non-compostable food containers.

“I think the more people are connected to each other and looking at some of these examples in other cities, you can start to see a roadmap for how to really make a difference in your own community,” says Forbes.

To email your representatives about passing policies that reduce the production of single-use plastic or sign a petition to demand that the Association of Volleyball Professionals stopusing single-use plastic water bottles on beaches across the U.S., visit the Take Action Center, provided by the Plastic Pollution Coalition.

For even more ideas on how to get involved, whether that means writing a letter to the editor for your local newspaper or starting a plastic-free community group, refer to Greenpeace’s Million Acts of Blue toolkit.

4. Take initiative wherever you are

Savitz says people can make demands to reduce plastic at companies they work for or purchase from, universities, churches, synagogues, mosques, or other areas. And don’t feel like you have to wait for organizations to start a campaign. Speak up and let companies know that you are a valued customer.

“Don’t feel like you can’t be a leader because this is really going to take a lot of campaigns — maybe not 10, maybe hundreds of individual campaigns with different targets,” says Savitz.

Forbes and Savitz agree that recycling is not the end-all-be-all solution to plastic pollution. It’s not enough for companies to say they’ll recycle as much plastic as much as they put out. To begin with, many American towns and cities have cancelled their recycling programs or limited what they accept from residents, according to the New York Times. Meanwhile, China is no longer accepting most foreign recycled materials.

“The fundamental reality is that there’s no way for us to recycle our way out of this problem, and we just need less plastic,” says Forbes. “Pushing companies to produce less plastic and governments to incentivize away from endless single-use plastic is really what it’s going to take to get us to healthy, clean oceans where marine life can thrive, people can enjoy it, and protect our food systems, as well.”