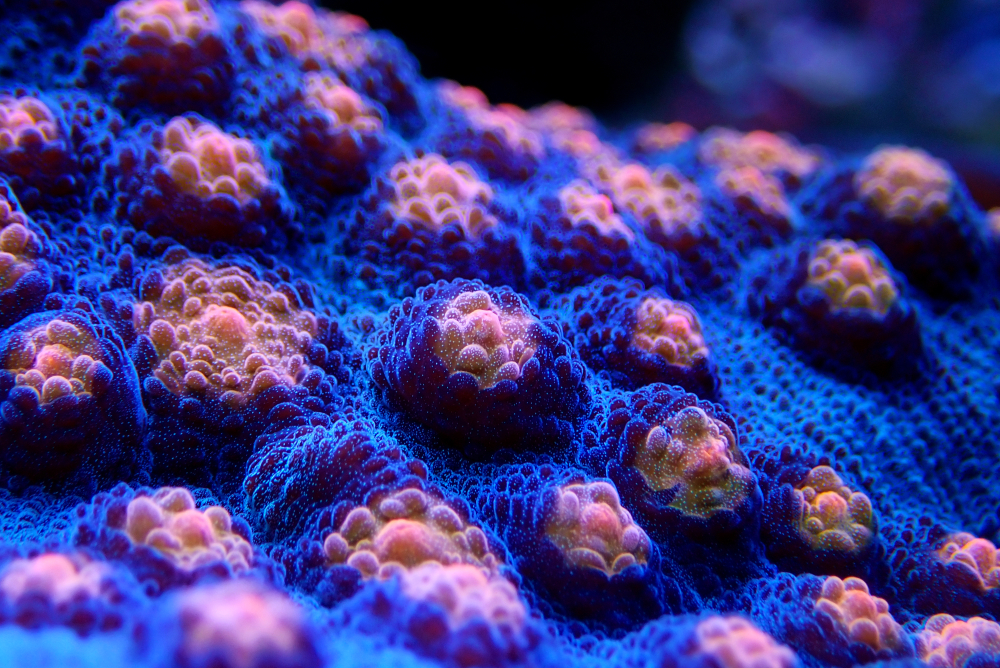 Drone imagery of coral patches along the coast of Maunalua Bay, Oʻahu, where researchers in the Marko Lab use coral DNA from filtered seawater to assess coral cover on local reefs. Photo courtesy of Patrick K. Nichols.

Scientists at the University of Hawaiʻi at Mānoa Department of Biology have developed a technique for measuring the amount of living coral on a reef by analyzing DNA in small samples of seawater. The new research by Patrick Nichols, a graduate student in the marine biology graduate program, and Peter Marko, an associate professor in the Department of Biology, was published in Environmental DNA.

As an efficient complement to visual surveys, the analysis of environmental DNA (eDNA), DNA sloughed or expelled from organisms into the environment, has been used to assess species diversity, primarily in aquatic environments. The technique takes advantage of the fact that all organisms constantly shed DNA into the environment, leaving behind a genetic residue that can be detected and analyzed with molecular biology tools.

Despite the growing use of eDNA to catalog the presence and absence of species, a reliable link between the abundance of organisms and the quantity of DNA has remained elusive. In their paper, Nichols and Marko demonstrate that this new method tested on coral reefs in Hawaiʻi is a quick and cost-effective way to measure live coral “cover,” the amount of a coral reef occupied by living corals. Because corals facilitate the presence of many other species on a reef, coral cover is one of several important measuring sticks that scientists use to characterize the status of a reef, an urgent task on reefs that are declining worldwide as a consequence of global climate change.

“It still amazes me that in a tiny tube of water, there is enough information to track the relative abundance of entire communities,” said Nichols. “Increasing the breadth and scope of surveys is exactly what makes the future of eDNA so exciting!”

The project used “metabarcoding,” a technique in which all of the DNA in a water sample is analyzed in one step with DNA sequencing. Coral DNA sequences are then identified and counted to determine the abundances of different types of corals at each reef. Degraded reefs have very little coral eDNAwhereas reefs with more living corals have a much stronger coral eDNA signature.

The authors explain in their paper that this new technique can be used to track changes in coral reef health and community composition over time, as well as detect rare species that can otherwise be missed by traditional visual-based survey methods.

“If you asked me 10 years ago if this was possible, I would have said, ‘No way,’” said Marko. “But advances in technology and falling costs of highly-sensitive DNA sequencing methods have opened the door to all kinds of important ecological questions.”

The researchers are currently applying what they learned from the project to the most compelling applications of eDNA monitoring in communities that are much more difficult to visually assess, such as deep reefs that provide potential refuge from climate change for temperature-sensitive species.