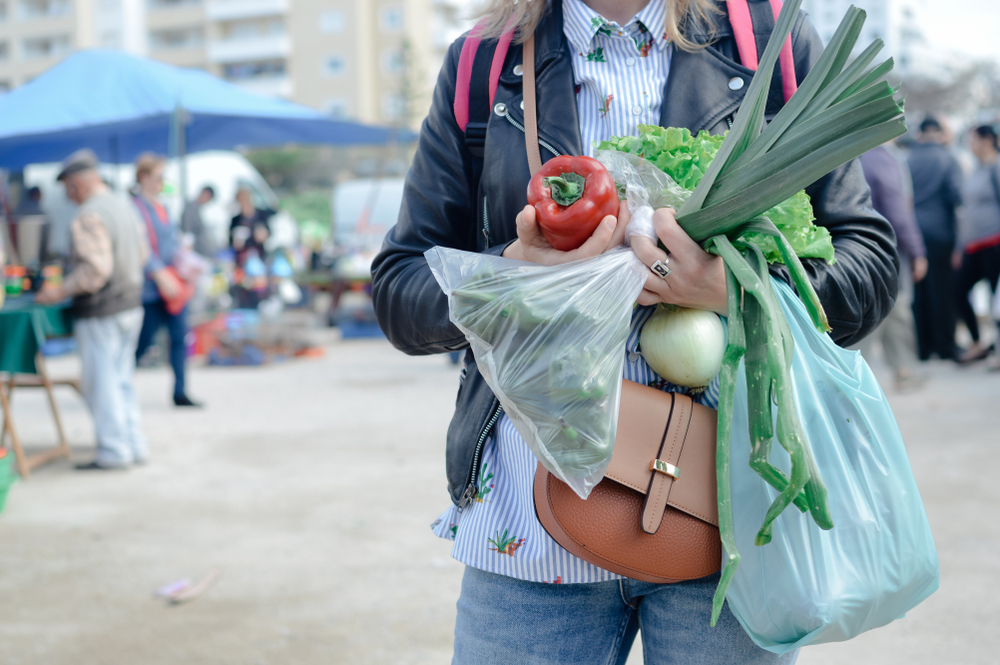 Plastic bag bans are spreading. But are they truly effective?

Kenya has the strictest penalties for bag use, but the consumer alternatives to plastic have come with growing pains.

As James Wakibia, citizen activist, leads the way along narrow walkways that snake around vegetable stalls, he shrugs at the irony. Plastic bags replaced by plastic bags. He is the 36-year-old face of the social media campaign that prompted the ban in 2017 and says an imperfect ban is better than none.

“Okay, they are polypropylene, but they’re reusable and they’re not the thin bags that can be carried by the wind,” he says. “The UN says that Kenyans were using 100 million bags a year by supermarkets alone, so we have saved 100 million bags. I would rate success at 80 percent.”

Often described as the world’s number one consumer product, as well as the most ubiquitous, shopping bags are now among the world’s most-banned. As of last July, the United Nations counted 127 nations that have banned or taxed bags‒and bag regulations have proliferated so quickly, especially at the local level, that even an Al Qaeda-backed terrorist group joined in‒banning plastic shopping bags last summer as “a serious threat to the well-being of humans and animals alike.”

This spring, the European Union took steps to ban plastic bags as part of a sweeping effort on plastic items found most commonly on Europe’s beaches. In the United States, New York this month became the second state, after California, to ban plastic bags‒and at least 95 bills relating to bags were introduced in state legislative sessions this winter, more than any other year. (Hawaii has a defacto statewide bag ban because every county banned them.)

Yet as bag bans spread around the globe, their effectiveness—despite Wakibia’s sunny appraisal of Kenya’s effort—remains an unanswered question. Bag bans have spawned bans of other plastic products, including plates, cups, cutlery, straws and bottles, as part of an expanding effort to reduce single-use plastics, which make up about 40 percent of the plastics manufactured worldwide. But whether bans can significantly reduce plastic waste, which leaks into the oceans at an average rate of 8 million tons a year, remains to be seen‒especially when considering that plastic production is forecast to double by 2040, and may account for 20 percent of the world’s oil production by 2050.

Even the most ardent proponents of bans are aware of the limitations.

“As important as banning single-use plastic bags is in terms of reducing it as a source, it’s not going to change the world,” says Mark Murray, executive director of Californians Against Waste. “The main point, frankly, is to communicate to policy makers, the public, and to the industry that we’ve got to do something serious to reduce plastic packaging and if you all can’t figure out how to do it, we’re going to start banning your products one at a time.”

From marvel to menace

It took less than four decades for plastic bags to make the transition from marvel to menace. Plastic bags were born in the post-World War II explosion of manufactured plastic household goods and became popular in the 1970s. By the end of the 1980s, grocery stores in the United States had switched from paper to plastic; plastic bags proliferated after that by the millions.

Firm statistics about the number of plastic shopping bags manufactured today are elusive‒even the American Progressive Bag Alliance, an industry trade group, says it does not know the figure. The UN estimates that between one and five trillion bags are produced worldwide. Even using the lowest figure, that translates into bag use of two million bags per minute, according to the Earth Policy Institute.

The proliferation of bags was enough to overwhelm even western nations’ waste collection systems. And, it hasn’t helped that flimsy film bags are among the least recycled plastic products, even though polyethylene can be easily recycled. In the United States, few sorting facilities accept them, as they tend to jam up machinery not suited to processing film.

Plastic bags are in the top five items found in beach and river cleanups and the harm to wildlife has been well documented. Once in the sea, they can quickly degrade. In a dramatic experiment at Plymouth University in Britain, Richard Thompson, a marine scientist who coined the term microplastics, and two of his students fed pieces of a plastic bag to amphipods, tiny shrimp-like crustaceans, and found critters could quickly shred a single bag into 1.75 million microscopic fragments.

Bags are also consumed whole by sea turtles, dolphins and whales. In the last month alone, two more dead whales, stomachs crammed with bags and other plastics, washed up on beaches, adding to a growing tally. In Kenya, it’s cattle and elephants.

Bangladesh passed the first bag ban in 2002, putting the lie to the argument against bans and taxes because they disproportionately harm poor nations and poor people, who rely on free, inexpensive and sturdy sacks to carry goods and store belongings. The African continent now leads the world in bag regulations, with 34 countries adopting taxes or bans‒31 of them in sub-Saharan Africa, the world’s poorest region. Kenya’s penalties are the world’s most punitive, with manufacturers, importers, distributors, and users facing up to $38,000 in fines or four years in prison.

In Denmark, which passed the world’s first bag tax in 1993, residents use, on average, four plastic bags per year. By contrast, in the United States, which is the largest generator, per capita, of plastic packaging waste, Americans use almost one bag per person daily.

Fighting back against bans

Political opposition to bans in the United States has gained a boost from a handful of studies that highlight the limitations of bans. In California, for example, Rebecca Taylor, an economist at the University of Sydney, found that shoppers in cities that banned bags before the 2016 statewide ban took effect used fewer shopping bags, leading to a reduction of about 40 million pounds of plastic waste. But she found in her study that sales of trash bags rose, offsetting the reduction in plastic bags to 28 million pounds.

In the United States, the bag industry has sought legislation that would improve recycling. Meanwhile, it has invested in bins placed at store entrances in hopes that shoppers will drop off used bags that will be remade into new bags, completing the circle. But trying to persuade consumers in a nation with a nine percent recycling rate to take the extra steps and cart used bags back to stores may prove to be a Sisyphean task.

“We spend literally hundreds of millions of dollars in the recycling of plastic retail bags, including stretch film, dry cleaner bags, bread bags, ice bags‒you name it,” says Matt Seaholm, the executive director of the American Progressive Bag Alliance, which bills itself as the frontline against bans and taxes. “That includes buying stuff from places that are collecting it. We would love more stores to be involved. We would love more stores to promote it more. We would love stores to have cashiers who tell folks they can bring their bags back.”

In Kenya, the bag ban has faced a sequence of rocky challenges. The Kenya Association of Manufacturers unsuccessfully opposed the ban in court, warning that as many as 100,000 jobs in the plastics manufacturing industry could be lost.

Once it took effect, the ban prompted the creation of “bag cartels” that smuggled illegal plastic bags from neighboring Uganda and Tanzania.

Geoffrey Wahungu, director general of Kenya’s National Environment Management Authority, conceded in an interview that the government failed, at first, to consider what alternative products could be used to replace plastics that were banned. Eventually, plastics used to wrap various fresh foods, such as meat, were exempted from the ban, along with other products.

Although the arrest of a roadside fruit seller caught with his apples in a plastic bag was featured in media accounts, most of the enforcement has focused on distributors, not lone sellers or consumers. Even so, enforcement has been spotty and incomplete, as has a clear accounting of the numbers of arrests and fines levied so far.

“The ban had to be drastic and harsh, otherwise Kenyans would have ignored it,” says Walibia, the activist.

On that, he may have a point. Litter still collects in abundant amounts on the Kenyan landscape. Still, the country appears in some ways visibly cleaner. Bags that once hung like windblown shrouds from tree branches are fewer in number, as are clumps of bags that clogged drainage systems and created breeding pools for malaria-bearing mosquitoes.

“Everyone is watching Kenya now because of the bold step we took,” Wahungu says. “We are not looking back. We are not relenting.”

But the government moved to widen the ban, it is confronting new challenges. The government now wants to ban non-woven shopping bags, those very “eco-friendly” bags that replaced the flimsy bags in 2017. The ban was to begin this month, but has been blocked by the court while manufacturers seek to stop it.