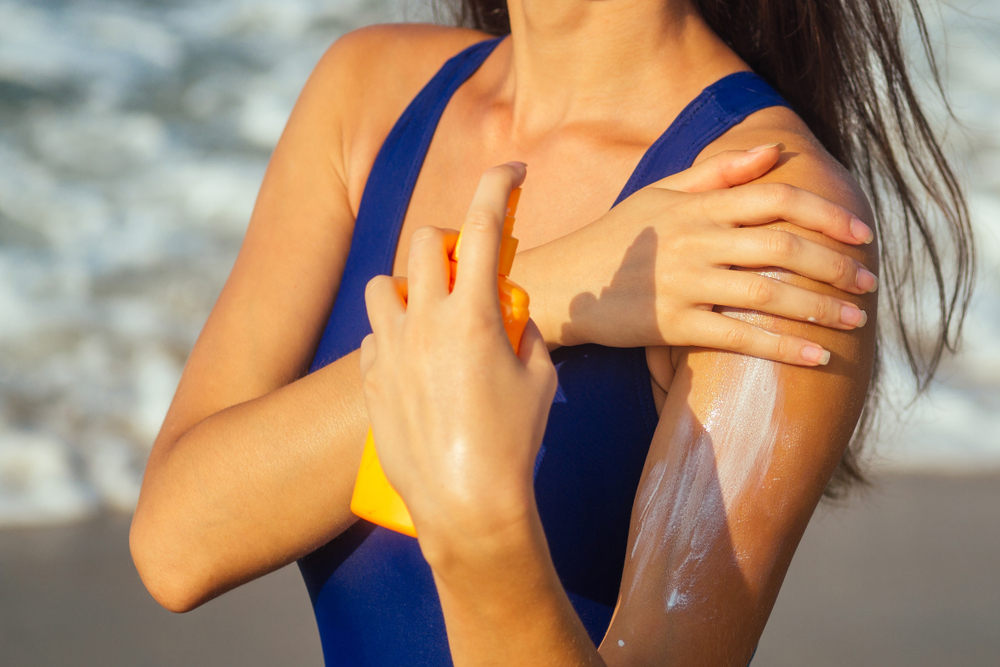 Choosing a sunscreen that won’t harm you or the environment

Choosing a safe but effective sunscreen is becoming a pain in the brain.

While we spent decades happily applying the sunscreen of our choice, the chemical ingredients that manufacturers used to fight the sun have been under attack. The latest salvo: a study by the US Food and Drug Administration showing that we can absorb high levels of four of those chemicals into our bloodstream after just one day of sunblock use.
Is that a problem for our health? No one knows. In February, the FDA reiterated its call for manufacturers to do safety investigations of 12 of the sunscreen chemicals most commonly used in the United States. Those tests could take months or even years.
In the meantime, what’s a person to do to shield their skin from the sun’s harmful rays? CNN put that question to some of the top experts in the field.

What is the best sun protection choice?

Guess what: It’s not sunscreen.
“We’re really trying to steer people in the direction of clothing,” said Dr. Sophie Balk, an attending physician at Children’s Hospital at Montefiore and a member of the American Academy of Pediatrics Council on Environmental Health.
“I see lots of patients, and when I ask what they do for sun protection, the first thing people say is ‘I use sunscreen.’ That’s what people turn to,” Balk said. “But you should turn first to lightweight clothing, hats and sunglasses and only put sunscreen on what’s exposed.”
Try to wisely choose your time in the sun, Balk said, by avoiding the most intense rays between 10 a.m. and 4 p.m. and seeking shade when possible.
Dr. Len Lichtenfeld, acting medical director for the American Cancer Society, agreed: “We have a phrase we’ve used for a long time that actually came out of Australia: Slip, slop, slap and wrap.
“Slip on a long-sleeve shirt, slap on a wide-brimmed hat, slop on the sunscreen, and use UV-protective sunglasses that wrap around the eyes when out in the sun,” Lichtenfeld said.
“There are a number of sun safety strategies that are effective,” he said. “Sunscreens are one of those strategies, but they should not be the primary strategy.”

Is there a better choice in sunscreens?

“The FDA considers the mineral-based sunscreens composed of titanium dioxide and zinc oxide generally safe,” Lichtenfeld said. These sunscreens physically deflect and block the sun’s rays, as opposed to chemical filters that absorb the UV rays and, as they break down, release heat.
Nneka Leiba, director of healthy living science at the Environmental Working Group, an advocacy group that puts out a yearly guide to sunscreens, agreed: “Zinc oxide is definitely the gold standard.”
“Zinc oxide provides great broad-spectrum protection that protects against both UVA and UVB rays,” Leiba said, adding that many people don’t realize the SPF (sun protection factor) of sunscreens applies only to the UVB rays that cause sunburn. But the UVA rays also damage and age the skin.
“UVA rays penetrate deeper into the skin and into the tissue and can cause long-lasting damage,” Leiba said, “so you want a sunscreen that provides what is called broad spectrum and protects from both. That is definitely zinc oxide.”
The mineral based sunscreens also don’t seem to harm the environment.
The downside of mineral-based options like zinc oxide, American Academy of Dermatology spokesman Dr. Henry Lim said, is that they leave a white cast on the skin, which many people find unattractive.
“For fair-skinned individuals, it’s not a major factor,” said Lim, who practices at the Henry Ford Health System in Detroit. “But for darker-skinned individuals, it is noticeable.”
However, the Environmental Working Group, which has long advocated the use of mineral-based sunscreens, says there are newer formulations on the market that minimize the discoloration.
“So there is no reason anymore why people can’t find a safe and effective sunscreen, especially if they’re just looking for mineral options,” Leiba said.
One caution: Experts advise against using spray versions of mineral products because they are made up of nanoparticles.
“If you think of the quintessential image of a surfer back in the ’60s, when he had the white paint stripe on his face, that is what zinc oxide looks like when you put it on the skin,” Leiba said. “And in order to get it usable, manufacturers have engineered the nano version so that it can rub in.”
Studies show that the nanoparticles do not enter broken skin, but the same is not true if you spray a nano-based sunscreen, she said, “because it can get into the deep recesses of the lungs and cause irreversible damage.”
The issue of whether sprays of any type of sunscreen, mineral or chemical, could be harmful to the lungs is also being examined by the FDA.

What if I want to use the same chemical sunscreen I’ve used for years?

“At this point, there’s nothing wrong with it. It does what it’s marketed to do, which is help protect you from UV rays,” said dermatologist Dr. Ade Adamson, assistant professor of internal medicine at the Dell Medical School at the University of Texas at Austin.
“The problem is, there wasn’t any well-done studies to figure out whether some of these chemical sunscreen ingredients get absorbed into the blood,” he said, “which is what the FDA just did.”
Adamson, who created a “tweetorial” on the new FDA study, points out that the FDA did not say the four sunscreen ingredients in the study — avobenzone, oxybenzone, ecamsule and octocrylene — or any of the other chemicals under investigation are unsafe. But the agency insists the ingredients be studied.
“There have been a number of technological advances in the formulation of sunscreens,” the FDA wrote in February in its proposed regulations, which “have led to currently marketed products with more active ingredients combined together in higher concentrations than were previously used.
“These changing conditions of use and differences in sunscreen formulation may also lead to greater absorption and possibly additional risks,” the FDA added.
Lichtenfeld noted that “most people are not aware, these chemicals are in fact considered drugs. The FDA is now saying we need to treat them like drugs. We need to understand much more about how they work, and we really need to know about their safety as well.”

Can I avoid the worst chemical offender?

That would be tough at this time, experts say. Oxybenzone, the chemical that has been studied the most, is in about two-thirds of all sunscreen products sold in the United States.
Research has found a potential link between oxybenzone and lower testosterone levels in adolescent boys, hormone changes in men, shorter pregnancies and disrupted birth weights in babies, and in rats, disruptions of endocrine systems, which means the chemical mimicked the action of natural hormones.
However, Lim points to the details of the studies and cautions against assuming that oxybenzone is the culprit just because there is a link. Take the rat study: “A colleague and I have published a study a few years ago and showed that to achieve the same blood level as those rats in the laboratory setting, it would take a daily application anywhere from 30 to 250 years,” Lim said.
The chemical could have an effect on the environment, as well. Hawaii, the Pacific nation of Palau and Key West, Florida, recently banned sunscreens containing oxybenzone and octinoxate because they may cause coral bleaching. However, those results were found in a lab, Lim said, not in real-world conditions.
In the new FDA study, however, “oxybenzone was absorbed into the body at about 50 to 100 times higher concentration than any of these other three chemicals they tested,” said David Andrews, senior scientist at the Environmental Working Group.
Oxybenzone also showed up in 97% of urine samples from a 2008 government study of Americans.
“So actually, we’ve known for 20 years that oxybenzone has the ability to get into the blood,” Adamson said. “What we don’t know still to this day is whether that has any kind of effect on human health.”
Now, he added, “what the sunscreen companies need to do is show that the chemical ingredients which ended up in the blood are not associated with some adverse outcomes.”