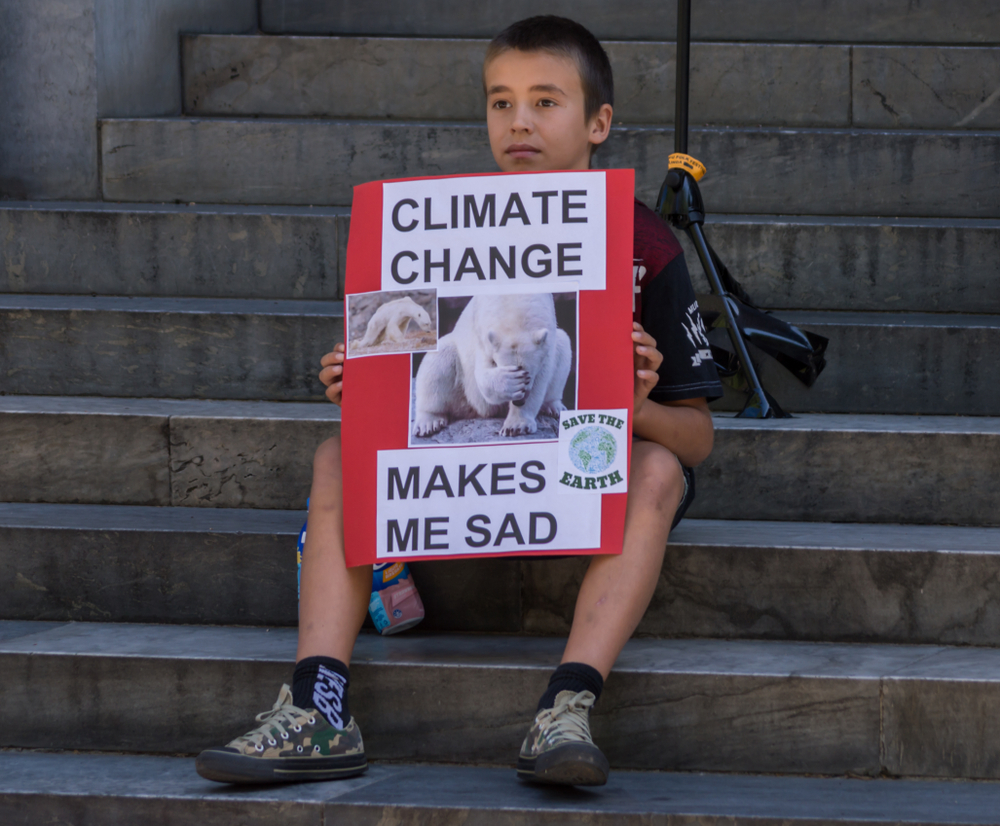 How Do You Talk to Children About Climate Change?

Hollywood has produced quite a few fictionalized depictions of dramatic climate change. Scores of people die after Manhattan freezes in 2004’s “The Day After Tomorrow.” In “Geostorm,” released in 2017, the weather goes haywire after satellites malfunction.

Realistic scenarios, though, have been less frequent. Yet Sunday’s episode of “Big Little Lies,” the HBO show about five women living in Monterey, Calif., included a second grader who had an anxiety attack after discussing climate change with a teacher. The girl worried the world was going to end.

Psychologists say the way parents and teachers talk about climate change with children has an effect on their young psyches.

“A lot of people, when they talk to kids, are processing their own anxiety and fears,” said John Fraser, a psychologist and chief executive of New Knowledge, a social science think tank that studies health and the environment. “Do you think kids won’t be scared, too? As a culture, we haven’t developed good tools to talk about these things.”

Janet K. Swim, a professor of psychology at Penn State University, said she emphasized several steps for parents (and teachers, for that matter) to take when talking about climate change with youngsters.

“You should start off with something positive, like, ‘We like the planet,’” she said. This should be followed with taking children outside to appreciate nature. For city dwellers, this is as simple as going to a park. Families in more rural areas can hike.

“The goal is for them to appreciate the beauty of nature,” Dr. Swim said. “They should be thinking about what is good in the environment.”

This serves a purpose: connecting children to a world larger than their own.

“There is this thinking that young kids will understand what we are talking about,” Dr. Fraser said. “But summer and fall are new. They are only beginning to understand the seasons. Nature, to them, is a tree.”

Dr. Swim and Dr. Fraser agree that the next step is discussing the process of climate change and its effect on the planet. This is essential to demystifying the concept of global warming. But it requires parents to do some homework, too. Many parents, educators say, have as much to learn as their children.

At the New England Aquarium in Boston, William Spitzer, the vice president in learning and community, said educators there often engage families by using animals as a starting point. Myrtle, an 80-year-old green sea turtle that weighs 500 pounds, is quite popular among visitors.

One way to explain climate change, he said, is to use the analogy of the Earth being covered by a blanket of heat caused by, among other things, burning fossil fuels. That action creates more carbon dioxide, he said, which “causes the temperature of the ocean to rise.”

For sea turtles like Myrtle, temperature affects gender. “Changes to the environment affect the male-to-female ratio,” he said.

If children can understand how climate change affects an animal like Myrtle, they are more apt to expand their attitudes about the environment, Mr. Spitzer said. “We always try to connect the story back to something people already care about.”

In some situations, though, parents deny that climate change exists. In those cases, Dr. Fraser said, conversations are tricky. “The kids will have two conflicting views of what is going on in the world,” he said.

Educators at the aquarium do not try to change the minds of visitors who resist the concept, Mr. Spitzer said. “But there are not as many deniers as you might think given the noise they make,” he said. “People who go to zoos and museums and aquariums are more open.”

So what can a parent or teacher do to assuage fears? Dr. Fraser suggested that engaging children in social activities, like community gardens or a school recycling program, can give them agency over their future.

“It’s not just what an individual can do,” he said. “We have to look at what we can do as a community.”

Added Dr. Swim: “You don’t just sit down once and talk about it. It is an ongoing conversation.”

Advocates and other environmental professionals are already seeing a shift in attitudes. Community is key to addressing fear, said Meghan Kallman, a sociologist and co-founder of Conceivable Future, an organization that highlights how climate change is limiting reproductive choices.

“We are now only beginning to talk about climate anxiety,” she said. “It used to be fringe-y.”

Ms. Kallman said she has observed children asking parents what they plan to do about climate change.

“And parents should have an answer for that,” she said.