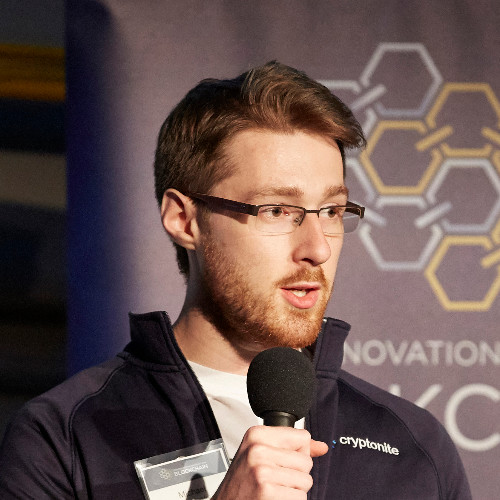 Michael Brenndoerfer: How I started a company while going to school full-time

Anyone would agree that starting a business is no easy feat. It’s a job that demands your attention 24/7. Now imagine doing it while you are in school. Full-time. That’s what Michael Brenndoerfer, founder of cryptocurrency brokerage platform Cryptonite, did when he was pursuing his Master of Engineering (MEng) degree at UC Berkeley last year.

“Looking back, I’m not quite sure how I managed to do it,” Michael said, laughing.

It all started when Michael took an entrepreneurship class from Haas Business School in which students were asked to come up with ideas for their own start-ups. For most students, it’s only an opportunity to get a taste of the start-up world. But for Michael and his project partner Dustin Seely, their project became the prototype of a real business. Their initial idea was to create a crypto index or hedge fund. But after research and several pivots, they decided that a brokerage platform was what the market needed.

“The market for crypto went through the roof during the last year. We were lucky because when we started it wasn’t evident that it was going to happen. It was just lucky timing,” Michael recalled.

As market interest for cryptocurrencies grew, people wanted a platform on which they could trade and manage all their currencies conveniently. Although trading Bitcoin was already relatively easy, the same didn’t go for other currencies (alt-coins). People holding fiat money needed to first buy Bitcoin and then use it to buy other coins, a complex and often intimidating process that required multiple accounts across different platforms.

Michael and Dustin wanted to change this and make investing in cryptocurrencies easy and accessible to everyone. That’s why they decided to make Cryptonite a brokerage platform that allows people to trade every cryptocurrency directly with USD and manage all their coins in one place.

With this idea, they went to work, while balancing a full-time school schedule. Michael still remembered all those sleepless nights.

“For the last two or three months of the program, I was basically awake for 35–40 hours straight and then got one regular night of sleep, maybe. It was intense,” he said.

Since they were only a two-person team, they had to do a bit of everything. Being the technical person, Michael was unquestionably responsible for coding. But he was also involved in the business and legal aspects of the company. He described his typical day as an entrepreneur and student: wake up, drive to San Francisco, pitch to VCs, meet knowledgeable people in the space for lunch or over a coffee (this is the best way to get very niche or specific information), drive back to Berkeley for classes, sleep an hour in the afternoon, do school work, attend events in Berkeley to meet students that might be interested in joining the team, in the evening go back to San Francisco or the Valley to network at crypto or FinTech conferences, get back to Berkeley and code all night, and then repeat.

This huge amount of work Michael had meant that he needed to prioritize. He gradually shifted his focus from schoolwork to the company as they became more serious about it. “I signed up for way more classes initially and I quickly realized that I needed to prioritize what I wanted to do. I ended up being okay with just passing the requirements,” Michael said.

But Michael felt the biggest challenge was neither time nor sleep deprivation. It was the recurring self-doubt of not knowing whether what they were doing would work out or not.

“People often talk about the emotional roller coaster of founders. Even though it sounds cliché, looking back I think it’s very true,” Michael said. “You face so many uncertainties and opportunity costs.”

From the financial risk of not having a job that provides a steady income to the academic cost of not focusing on schoolwork, the pressure was multilayered.

“But you always have to put on a happy face because you have to convince yourself, investors and potential employees that it’s a great idea,” Michael said. “You are the last part of the chain that has to deal with all the pressure.”

That’s why Michael thought his emotional support system was crucial. His co-founder Dustin helped to share the pressure and was always there on his down days. Their mentor Professor Kurt Beyer also offered both practical and emotional assistance. Having been an entrepreneur himself, he gave them helpful advice, introduced them to legal personnel and guided them through the mental journey.

In one year, Michael and Dustin grew the company to ten people and secured a significant amount of funding. But they had expected to raise more to meet the enormous capital requirement needed to secure various license in the FinTech space. This funding gap, together with their uncertainty regarding the future direction of the space and other personal reasons, led them to wind down the company earlier this year. Still, this was a valuable experience that taught Michael many things. Having gone through this busy period, he has learned to be more efficient with his time. For example, whenever he now reads something, he makes sure that he understands everything the first time and never has to go back again, and repeatedly spend time on it.

His advice to current MEng students: “Make wise use of your time at Berkeley and try to tap into all the great resources that are available to you.”

Michael Brenndoerfer is currently a Senior Software Engineer at Fitbit. Before Cryptonite, he spent 4 years at IBM Research and had worked at two start-ups. He earned his Bachelor’s degree in Computer Science at Baden-Wuerttemberg Cooperative State University in Germany. He went on to receive his Master’s degree in Electrical Engineering & Computer Science at University of California, Berkeley.