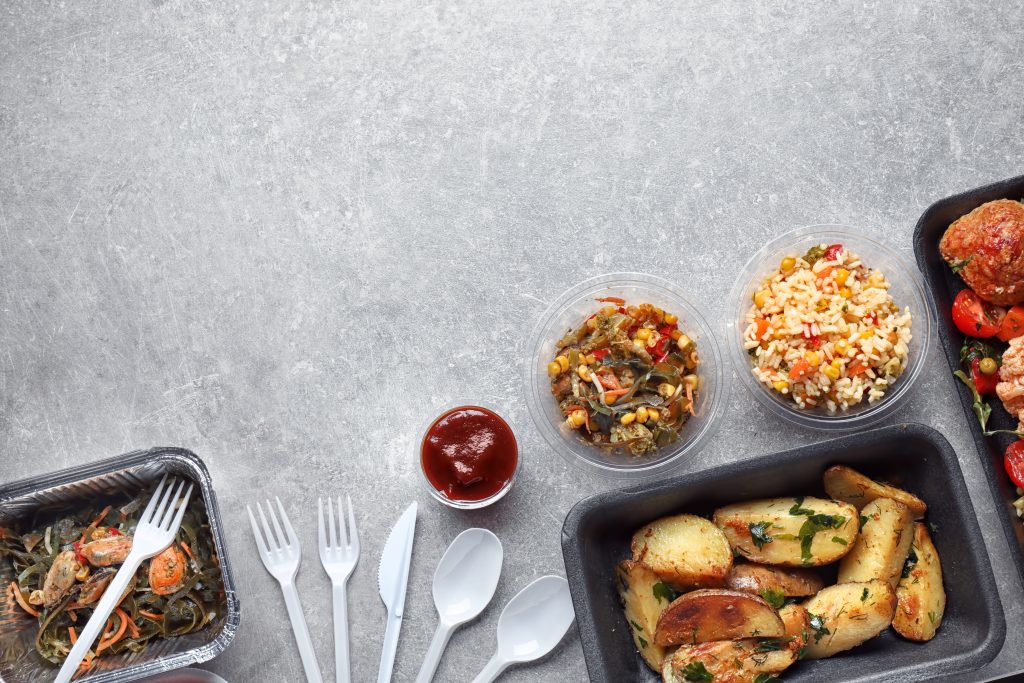 How Bad are To-Go Containers for the Environment?

The anti-plastic revolution is in full swing: Bans on plastic straws and bags are taking effect around the world, and major companies are starting to switch over to plant-based plastics. But as more and more plastics continue to pop up on the market, there’s one big thing we all need to keep in mind: Not all “eco-friendly” plastic alternatives belong in your compost or recycling bin. In fact, once there, a lot of them will do more harm than good.

Can’t all compostables be composted at home?

It’s easy to assume that items like bioplastics, which are usually made from materials like corn or sugar cane, can be recycled or composted at home. But a lot of the time, these “compostable” materials that you’ll find in cafés and fast-casual restaurants actually need to be sent to an industrial composter since that’s the only place with temperatures hot enough to break them down. If you throw them in your backyard pile, they’ll just sit there, and if you cross your fingers and put them in the recycling bin, they will majorly mess with the recycling process.

“‘Wishcycling’ is a costly mistake, so the best thing we can do is educate each other,” affirms Meredith Danberg-Ficarelli of Common Ground Compost.

To avoid confusion, start with this golden rule: If something has a number 7 or the letters PLA at the bottom, it needs to be sent to an industrial composter, so drop them in the compost bin at the establishment where you got it.

What’s so bad about putting “compostable” things in the recycling?

While recycling incorrectly may seem like an innocent enough mistake, it’s important that we’re all diligent about our waste because the U.S. recycling system is not in a good place right now.

Earlier this year, China (which used to accept about one-third of American recycling) tightened its regulations and stopped accepting contaminated materials—aka ones that are dirty or in the wrong bin. “Passable contamination rates used to be 3 to 5 percent on a bale of materials and now it’s 0.5,” says Beth Porter, the climate and waste director of Green America, whose book Reduce, Reuse, Reimagine: Sorting Out the Recycling System comes out next month.

Now that China won’t take certain materials, recycling centers in the United States are being forced to pivot, Porter explains. “Our systems in the U.S. weren’t made to tackle contamination in a serious way, so now we have materials stacking up.” Some cities and counties are scrambling to reduce the type of material they will collect, while others are pausing recycling services altogether until they can educate consumers about which materials go in which bins.

So as it stands now, if you put something in the recycling that shouldn’t be there, the best-case scenario is that it gets diverted to landfill (and pumps CO2 emissions into the atmosphere in the process). Worst case, it contaminates the other materials in that recycling bin and puts even more stress on an already strained system.

So what’s the best plan for when I go out to eat?

At the end of the day, it’s always best to stick with reusable plates, cups, and cutlery whenever you can—even if it means bringing them from home.

Before you roll your eyes, Celia Ristow, the zero-waster behind the blog Litterless has some smart tips to make doing so painless. “I think there’s a balance between bringing the right things so you don’t have to make trash and feeling like you are always hauling around the entire contents of your kitchen,” she says. In her pared-down zero-waste kit, you’ll find:

Then, instead of always asking the person behind the counter to put your food in a reusable container, Ristow just seeks out restaurants that have dine-in options.

“When I want food on-the-go I’ll typically go to a restaurant where you can order at the counter and then sit down. I’ll ask for my food to stay so it comes in a reusable bowl and then sit down and transfer it to my container so I can take it on-the-go. It’s an extra step, but it can avoid the rejection or the difficult conversation that I don’t always have time to have,” she says.

“I’m also wary to make service people’s jobs harder. I think this is a good compromise that’s fair for them and fair for me too.”

And with that, it’s time to go forth and take your food to go like the in-the-know eco-consumer you are.