Madison County Veteran of the Year

For his lifetime of service to the United States and to God, William Yorton of Canastota was named the 2018 Madison County Veteran of the Year.

“I feel very humbled and honored,” Yorton said as he accepted the award from the Madison County War Veterans Memorial Committee Saturday evening. “As I look at everyone here, I see a lot of familiar faces. I also see people no longer with us. They were World War II vets, most of them. They spurred me on to accomplish the kind of things I accomplished. I’ll always remember them and see their faces as we look forward.”

A veteran of the Korean War, Yorton joined the military in 1953 and went to Sampson Air Force Base for basic training. He earned the rank of ammunition specialist at Lowrie Air Force Base and was part of the Far Eastern Air Logistical Force at 546th Ammunition Supply Depot in Okinawa, Japan. While at Bunkerhill Air Force Base, he served with the Air Defense Command and the 319th Flying Intercept Squadron and performed inspections on the planes, such as the ejector seat. 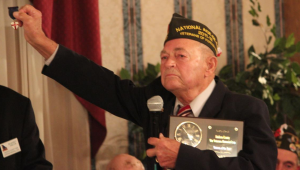 At Otis Air Force Base, Yorton earned the rank of staff sergeant at the munitions depot. Yorton finished his service in 1960 and by then, he was stationed at Griffiss Air Force Base as a maintenance chief for the special weapons area.

But before serving his country, Yorton served his community in the Boy Scouts, earning the rank of Eagle Scout in 1951. Yorton even earned the right to serve as honor guard for New York Gov. Thomas Dewey.

“The thing you see in the American Legion magazines, it says ‘For God and country’,” Yorton said. “As a Boy Scout, it was part of our oath. ‘On my honor, I will do my duty for God and country’. I happened to receive an award from the Boy Scouts.”

Yorton displayed for the crowd a medal awarded to him that he said stood for God and country, given to him by the Boy Scouts for Bible study. Yorton said he was the first person in Canastota to receive the award.

“Rev. Hess, a Methodist minister, and I would sit down at the old castle where the Greystone is now and go over the Bible to earn this medal,” Yorton said. “It’s something to look up to.”

After Yorton’s service in the military, he became an active member of the church community and serves with the the Canastota Area Association of Churches. Besides singing in his local choir, Yorton donates time and equipment to the Whitelaw Old Home Day. Yorton has escorted World War II veterans in the Old Home Day parade, served as grand marshal in 2016, and has arranged for military equipment to participate and provided meals to the drivers.

Yorton is the first Madison County resident to earn the Veteran of the Year Award since it was discontinued in the early 2000s. WAVEM committee members have been working since March of this year to revive the tradition, originally hosted by the former Oneida Moose Lodge. One of its last winners was Benson Barrett, who now chairs the Veteran of the Year committee.

This year’s nominees included Yorton, Donald Conley of Bridgeport, Norman McGowan of Chittenango, Reginald Emmons of Canastota, Joseph Palmisano of Canastota, and Donald Smith of Canastota. Criteria for the award included combat experience, service to the community and participation in local programs. To keep the vote fair, Barrett told the more than 100 people attending the award dinner that the committee held a blind vote, just as the former Oneida Moose Club did. The panel of five judges would have to vote on a scale of one to ten based on a biography of the candidate.

“We thought we would have a great time doing this, but I’ll tell you what, the toughest part was trying to make a decision,” Barrett said. “It was so close, we were sweating bullets. We thought we were going to have more than one person. The point total between the winner and the runner up was one point. That’s how highly respected these gentlemen are. They are all wonderful guys with not only a terrific military record but in their community, they’re there for you.”

Emmons, 97 and a World War II veteran, was glad he came to the event and said he had a wonderful time. To Emmons, it’s important to honor those who came before and those who are coming home.

“There a lot of veterans who sacrificed their life,” Emmons said. “And others who went through an awful lot.”

Yorton was presented a proclamation recognizing him as Madison County Veteran of the Year from the office of Sen. David Valesky, D-53, and Assemblyman William Magee, D-121.

McGowan was awarded a plaque with his name for runner up for Veteran of the Year.

An honorable mention certificate was awarded to Smith, Palmisano, Emmons and Conley.

“I’m so pleased everyone took time out of their day or evening to attend,” Barrett said. “We’re really looking forward to making this a yearly event.”

“WAVEM has a real good thing started,” Yorton said. “People ask ‘who are these people and what are they doing’. They’re honoring all the veterans of Madison County. It’s a big thing that’s been done.”