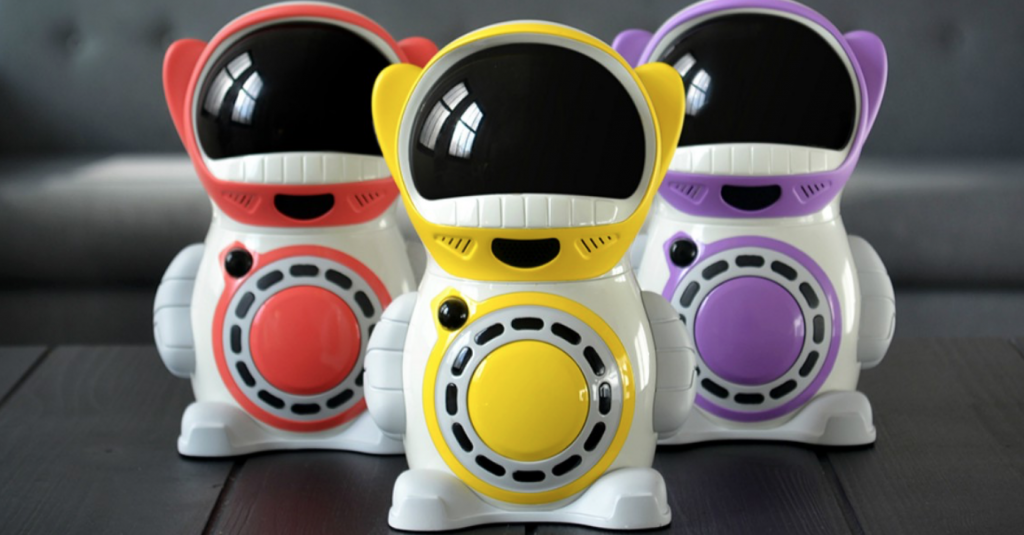 When Donald Coolidge got out of the Marine Corps Reserve, he imagined he’d end up working in law enforcement or some government job that had a clear correlation to his infantry training.

These aren’t just any children’s toys, though. They’re more like intelligent companions that use voice-based artificial intelligence to educate and interact with their owners.

One, a talking dinosaur, won a Parent’s Choice Award and was a finalist for Toy of the Year, and even made TIME magazine’s 2015 “Best Inventions of the Year” list — right up there with the hoverboard scooter, a bed that comes in a box and the Tesla Model X. Coolidge’s company, Elemental Path, where he is the co-founder and CEO, has also been recognized as the “Best Use of A.I. in Education” by the Global Annual Achievement Awards for Artificial Intelligence.

Looking back, Coolidge, 32, says going from Marine to toymaker isn’t really that big of a leap. Though his current role may not have the obvious crossover elements like some of the jobs he’d first considered, he’s using a lot of the same skills now that he learned during his 9½ years in the military.

While working intelligence on a B-billet in Iraq, he worked with drones, biometrics and population mapping “using cutting edge technology the entire time,” he said. “All these things got me excited about technology in general and how it can be used, which directly impact my work in the technology field now.”

Elemental Path, co-founded by Marine veteran Donald Coolidge, pictured, has created a product line of CogniToys that have earned the Parent’s Choice Award and a spot on TIME magazine’s “Best Inventions of the Year” list. (Elemental Path)

Plus, the military taught him the leadership and critical thinking skills he uses on a daily basis as an entrepreneur.

“You set out to accomplish something and just because one obstacle or one hurdle gets in your way … it doesn’t mean you stop. You have to still accomplish that mission,” he said.

Elemental Path, based in New York City, just launched a Kickstarter campaign for its newest invention in its CogniToys product line, a talking robot named Scout. The aim is to raise $50,000 before Dec. 7. As of Wednesday, one day after the launch, the company had already raised more than $18,000.

Coolidge said Scout — “a visitor obsessed with all things planet Earth,” as the robot toy is described in the campaign — is able to learn its owner and engage with him or her at their age level.

“We baked the educational aspect into the entire experience. You may ask a question about the moon and you get an answer to it, and (Scout) may follow up with a fun fact about the moon or ask you if you want to play a game or story about outer space,” he said. And if a child tells Scout that he or she is feeling angry, sad or stressed, the robot may crack a joke or recommend some meditation exercises to aid their health and wellness.

“Kids are already using screens probably more than they should, and Scout is all based on that verbal aspect to get kids thinking and talking and communicating,” Coolidge said. “Removing the screen, it creates this really amazing experience.”

When he’s not working behind the scenes to help create smart children’s toys, Coolidge directs the New York City chapter of Vets in Tech, an organization that promotes education, employment and entrepreneurship of veterans in the technology space.

He does it, in part, to help other veterans understand how their military skills translate into the industry and that law enforcement isn’t the only career field where they can leverage what they’ve already learned, like he’s come to realize.

“Technology is becoming more and more impactful in all of our lives,” he said. “And that’s true for all of us.”