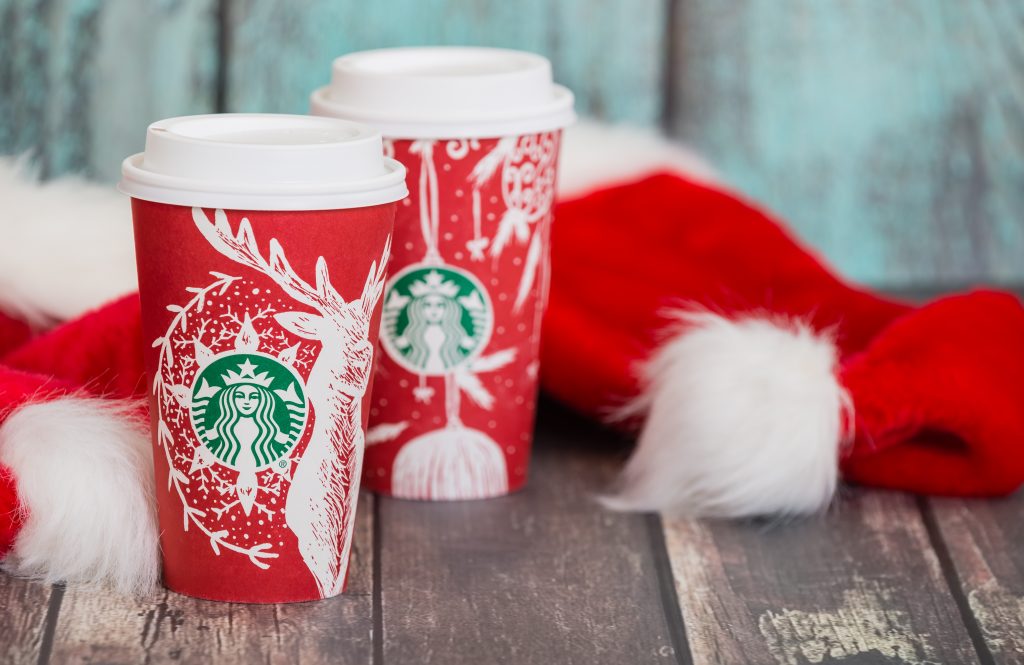 As Starbucks begins its holiday sales push a week earlier than normal, the company plans to offer a 50-cent discount on large holiday drinks served in seasonal reusable cups after 2 p.m. during the next two months.

The coffee company usually gives customers 10 cents off a drink if they bring their own cup. The increased incentive, running through early January, is part of an ongoing effort to drive business to Starbucks stores in the afternoons and a broader sustainability initiative aimed at reducing waste from disposable cups.

“We’re really trying to create a habit here,” said Starbucks Chief Operating Officer Rosalind Brewer. “When we know that people are most likely paying attention to our cups, we want to make sure we get this out in front of them.”

On Friday, Starbucks will give away the red-for-the-holidays reusable cups to customers who buy a holiday drink. The promotion is only available while supplies last, and only at participating stores. It will sell the cups for $2.50 thereafter. The 50-cent discount is on 16-ounce holiday beverages purchased after 2 p.m. and served in the red reusable cup.

Starbucks holiday cups have been a regular source of controversy, attracting scrutiny over the years for being too Christmas-y or not Christmas-y enough. Cup designers this year are seeing their work hit the market amid the worst political and cultural tensions in a generation.

Asked about that backdrop, Brewer said Starbucks was “very deliberate about listening to our customers,” who said “just traditional red and green.” The four cup designs — including a mistletoe image made of coffee berries and one with green stars from the corporate logo — are meant to evoke the company’s coffee heritage, she said.

Starbucks itself is closing the books on a rocky 2018 fiscal year. On Thursday after the stock markets close, it reports earnings for its fourth quarter and the full year.

It spent the spring responding to the racially charged arrest of two black men in one of its Philadelphia stores, leading to a highly publicized companywide store closure and training session. It has seen high-level executive changes, including the retirement of Chairman Howard Schultz and the departure of Scott Maw, chief financial officer.

The company said 3 months ago it’s expecting thinner operating margins for the year and same-store sales growth at or below its targeted range of 3 to 5 percent. In the third quarter, same-store sales grew 1 percent in the U.S. and decreased 2 percent in China — a poor showing in the company’s two most important markets.

In search of efficiencies, the company struck one deal giving Nestle rights to market its coffee at retail outlets and another to license its stores in four European markets to a third-party franchise operator. And it’s in the midst of a corporate reorganization, announced in September and expected to include job cuts at the Seattle headquarters, though executives have so far declined to say how many people would be let go.

Investors — including activist investor Bill Ackman, who announced a large position in Starbucks in early October — will be watching on Thursday to see if Starbucks regained momentum in its fourth quarter, and they’ll be scrutinizing its 2019 forecasts. (The Nestle transaction closed earlier than expected, during the 2018 fiscal year, and is expected to have a negative impact on the company’s reported profit for the year, rather than landing on its 2019 books.)

The holiday season is important for Starbucks, which benefits from the heavier foot traffic at traditional retailers, despite the ever-greater share of holiday shopping done online, Brewer said.

Starbucks’ early rollout of holiday-themed drinks, food items, cups and decorations is prompted by popular demand, Brewer said, citing finer-grained customer insights Starbucks is getting through a combination of its customer feedback and product teams with its digital business — an outcome of the ongoing reorganization, she said.