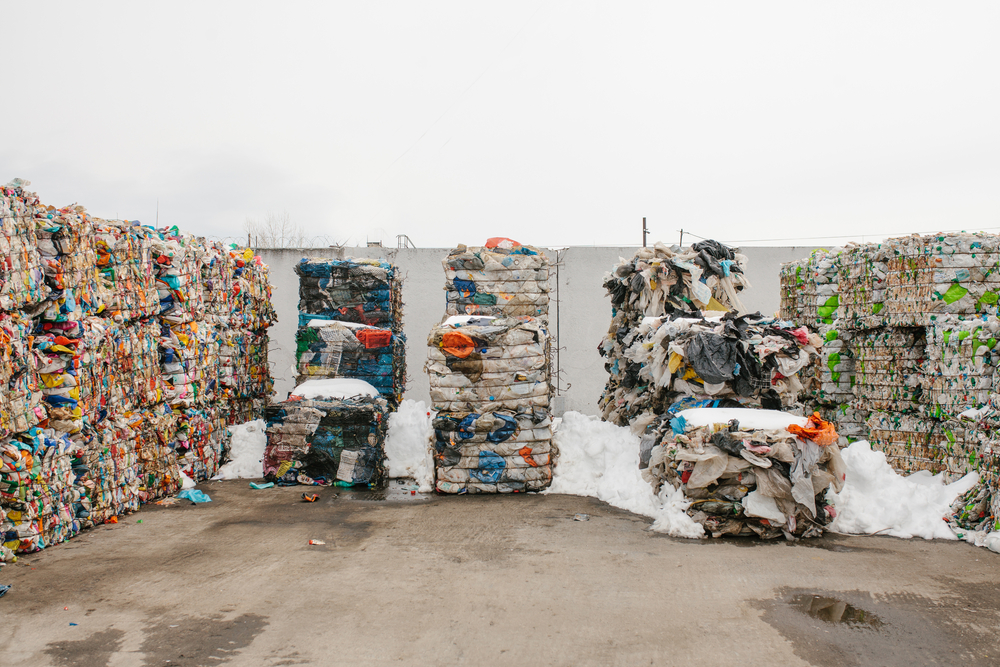 Alpine Waste & Recycling shut down its Denver recycling facility for a month to retrofit the plant with new technology and equipment. When it reopened in the middle of March, the $2.5 million investment proved to be 33 percent faster at sorting paper from cardboard, aluminum cans from yogurt containers and juice cartons from plastic-lined coffee cups (yes, it can recycle Starbucks coffee cups).

The facility can now handle 31 percent more refuse than it could in January. The bundled, sorted bales of materials are cleaner, which makes them more attractive to buyers. So, recycle away folks.

Still, the investment may not pay off for a while. Global forces — i.e. China — forced the industry to find new revenue sources as the world’s largest country of recycled trashed turned away sellers last year in order to clean up its own environment. And in states like Colorado, where household recycling rates are between 12 and 20.5%, it can be cheaper to toss trash in a landfill than pay for recycling. The price Alpine can sell its sorted, cleaned bales of paper for has plummeted.

“It’s probably dropped on average between 30 to 40%,” said Brent Hildebrand, Alpine’s vice president of recycling. “The alternatives are becoming slimmer and slimmer.”

But — and of course there’s a but, otherwise why write this story — we’re amid a trend nationwide to recapture that market domestically. Companies are reopening old paper mills, expanding plastics processing and getting big brands to switch to 100% recycled containers. Startups and large manufacturers are looking at new ways to reuse recycled materials so there’s no need to send them out of the country. And trash collectors, like Alpine, if they can afford to, are making investments today that could lead to more economic stability.

It’s just the transition period that is rough.

“With what’s happened overseas, there’s been a lot of investment in paper mills and other types of mills in the U.S. Those are being built and retrofitted right now,” Hildebrand said. “Our hope is that once they come online in another year or so, the capacity is going to grow in the U.S. to the point that we’re doing this domestically.”

The U.S. plastics industry invested in recycling processing plants long before China placed bans on incoming waste. By 2017, U.S. exports to China of the most popular plastic No. 1 — or PET, short for polyethylene terephthalate, which is used in water bottles — had shrunk to 16%, down from 57% in 2008, according to The Association of Plastic Recyclers.

“It’s a common misconception that all the plastics recycling was being sent to China, but they aren’t,” said Kara Pochiro, a spokeswoman for the recycling association. “There’s a lot of PET recyclers in North America. Maybe 25 to 30. There are several bottle-to-bottle plants. Some people think that a PET bottle can’t become another one, but they can.”

If plastic does get recycled in the U.S., a lot of it finds a new life from manufacturers who commit to using 100% recycled plastic containers, she said. A few large brands, including Walmart and Unilever, have set goals of 100% recycled packaging within the next decade.

Pochiro also pointed to a Los Angeles-based CarbonLite, which has facilities in California and Texas that take used water bottles and turn them into — wait for it — new water bottles. The company recently signed a long-term deal toprovide recycled bottles to Nestlé Waters North America. The commitment allowed CarbonLite to build a third facility closer to Nestle’s Pennsylvania operations to “have the ability to recycle over 2 billion post-consumer bottles a year,” according to Nestle.

“The long-term contract with Nestle is to produce water in 100% recycled PET bottles” Pochiro said. “If they sign a long-term contract, they’ll give them price parity with virgin resin because the market is guaranteed for a certain amount of time.”

But while less recycled material is being sent overseas, a greater chunk is still landing in U.S. landfills. Coloradans are sending more trash to landfills, too, or about 7.8 pounds per capita per day in 2016, compared with 6.3 pounds in 2012, as detailed in an earlier Colorado Sun story.

Nina Bellucci Butler, CEO of plastics market researcher More Recycling, said that in some states, plastic bottles are getting recycled at rates of only about 30% where plastic film, like the clear wrap to used to keep pallets of boxes together, is around 15%.

About 43% of plastics go into packaging and 28% is film. “But film is one of the hardest materials to recycle. It’s lightweight and highly engineered. To get that back into a clear resin is extremely difficult,” Butler said. “That’s why there’s a big focus on chemical recycling to get it back to its monomer form.”

Butler said companies aren’t incentivized — or forced by regulations — to use recycled materials in their containers.

“If we start really prioritizing use of recycled materials and putting pressure on the industry to make those investments, it could happen in the next five years,” she said. “But I think it’s further out than that.”

There’s a painful stat from Eco-Cycle, a nonprofit recycler in Boulder County. In a report released in November, the organization put Colorado’s recycling rate at 12 percent. The state’s estimate was 20.5 percent, which is based on weight of recycled material versus landfill material.

Recycling isn’t easy in Colorado and many communities don’t even offer curbside collection. The publicity over China’s restrictions may have caused some consumers to rethink recycling. Kate Bailey, policy and research Director at Eco-Cycle, says the industry fell short on education.

“We got sloppy in educating people about what can be recycled. People do want to recycle and they put everything in the bin. We call that wish recycling. We’re seeing a shift nationwide to emphasize recycling right, as opposed to recycling more,” Bailey said. “We’re two years out from the big China turmoil, and we’re starting to see lessons learned and the silver lining. The investments in processing is a great example. And a return to the importance of education is critical.”

Momentum Recycling, which opened a glass recovery plant in Broomfield two years ago, still has plenty of capacity to clean glass that is reused in beer bottles or other glass containers. It’s processing about 5,000 tons a month, or at about 67% capacity.

“We could use more,” said John Lair, Momentum’s CEO. “We’ve been working with municipalities to get more glass into the system. But what we see in the Front Range is a lot of the infrastructure (like curbside pickup) is lacking. When citizens have access to recycling, they use it.”

This year, Eco-Cycle pushed for a new law to help fund more recycling programs in the Front Range. Senate Bill 192, now waiting for the governor’s signature, will raise landfill tipping fees to fund a grant program for local governments and organizations in the Front Range. Cities could apply for grants to help them offer curbside recycling, she suggested.

“When I talk to communities about this, convenience and accessibility are the two words that come up. Curbside is the most convenient way to encourage people to recycle,” said Bailey, sharing a list of 16 cities in the state that provide curbside recycling to all residents. “We’re lacking data for Colorado but nationwide, about 50 percent of households have recycling (curbside) and they recycle far more.”

There is also growing investment in Colorado to build processing plants. Closer to home, Vartega in Golden is taking scrap metal, such as what the aerospace industry uses, and recycling it into carbon fiber to be used in “pellets, yarns, and 3D printing filaments,” according to the company. The ReWall Company, which was awarded a $1.5 million grant from the state, plans to build a manufacturing facility in the Front Range to turn food and beverage cartons into building materials that have the durability of plywood.

Applegate Insulation, which has a facility in Penrose, turns old newspaper and discarded paper into animal bedding and other products. With the decline of the newspaper industry, there’s less paper to recycle, so to find it more cheaply, the Michigan-based company invested in equipment that will further sort through the waste already picked over by recyclers. Such waste typically would end up in the landfill.

“What’s become available (to us) is the dirtier recycling. That has become very plentiful and very economic for us,” said Tom VanAlstine, Applegate’s chief financial officer. “We literally bought our own sort line. We bought a mini MRF (materials recovery facility). And we’re bringing in materials, what they call mixed paper, which is almost garbage, and sorting through it.”

Another large Colorado recycler, Waste Management, said it has invested more than $16.5 million in its Denver-area recycling plants in the past decade. It has a tool it calls a “glass cyclone” that blows paper and other lightweight contaminants off glass, which is then sent to Momentum Recycling in Broomfield for cleaning. Glass is then sent to manufacturers like Rocky Mountain Bottling for reuse as new bottles so all of Waste Management’s glass recycling is done locally in Colorado.

“In the past two years, we have installed equipment and controls to improve sorting of cardboard, paper and plastics. We also installed a glass sorting/cleanup system so that we can support bottle-to-bottle recycling in Colorado,” Jennifer Rivera, the company’s communications director, said in an email. “These investments increased our processing capacity to 30 tons per hour and improved the quality of our finished products.”

Last year, it recycled 177,254 tons of bottles, cans, paper and cardboard in Colorado.

Eco-Cycle welcomes the investment in facilities to increase efficiency in collection, sorting and processing of recycling. But Bailey says the transition between relying on international buyers versus recycling locally is still rough for many Colorado recyclers.

“We knew this was coming. There have been repeated calls to invest in our domestic infrastructure,” Bailey said. “We’re seeing paper mills expand. That’s good. In the long run, we’ll say China forced us to do what we should have been doing.”