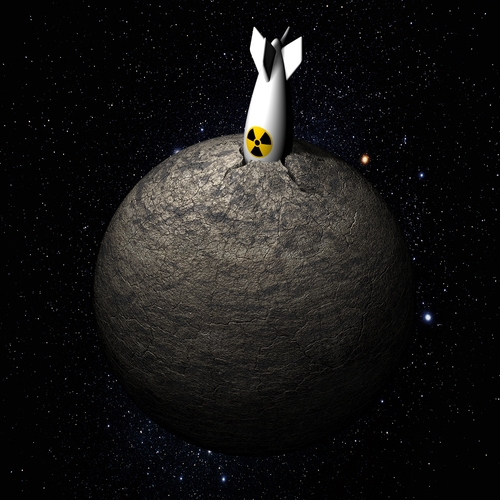 NASA to use nuclear bombs to destroy Asteroid Bennu

However, NASA, the National Nuclear Security Administration, and two Energy Department weapons labs have decided to design and develop a spacecraft that can deliver nukes to it if it gets too close.

Asteroid Bennu may hit Earth on September 21, 2135 but before that happens NASA has a plan to destroy it using nuclear bombs before it reaches us. It has about 1 in 2,700 chance of hitting Earth.

The chances of Asteriod Bennu making contacts with Earth is very less but the US Government wants to make it sure that the treat is neutralized, notes a report by Futurism. Bennu is currently about 54 million miles from Earth and orbits Sun.

The asteroid is a near-Earth object (NEO) listed as a “potential Earth impactor” and is quite massive. Measuring about 500 meters, the rock is not large enough to pose an existential threat to Earth, notes a report by Space.com.

However, NASA, the National Nuclear Security Administration, and two Energy Department weapons labs have decided to design and develop a spacecraft that can deliver nukes to it if it gets too close.

This project has been named as Hypervelocity Asteroid Mitigation Mission for Emergency Response (HAMMER). There are two methods listed by the Futurism report on how HAMMER could possibly work. If the asteroid is small, the spacecraft can be used like a pummeling tool and an 8.8-ton impactor would simply smash the rock. If the asteroid is large, then the idea is to obliterate it with nukes.

The idea is not entirely new notes the report. The original idea for HAMMER reportedly came from a 2010 report published in the journal Acta Astronautica where scientists wrote that, “The two realistic responses considered are the use of a spacecraft functioning as either a kinetic impactor or a nuclear explosive carrier to deflect the approaching NEO.”

Nasa reports that the OSIRIS- REx will reach Bennu this year, collect samples and head back to Earth by 2023. Of the many reasons why this mission was taken up in the first place like planet formation, and origin of life, Nasa also wants to improve the “understanding of asteroids that could impact Earth.”