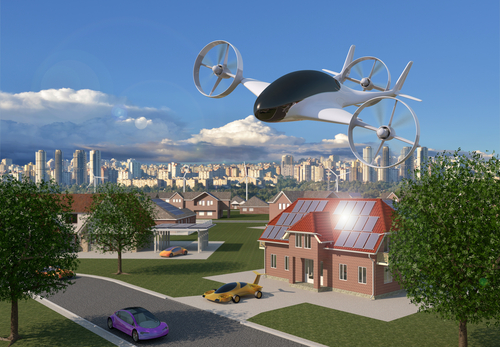 BlackFly Wants To Be The Flying Car You Can Finally Buy Next Year, And For Cheap

Yet another startup has popped up promising to deliver the future filled with flying cars that we’ve been promised for generations. BlackFly is an all-electric vertical take-off and landing (VTOL) personal aerial vehicle from a Silicon Valley via Canada company called Opener.

To call it a flying car is actually not quite correct, as it has no wheels, but it is the latest in a lengthening line of personal flying vehicles that aim to compete with cars as a primary way of getting around.

“Opener is re-energizing the art of flight with a safe and affordable flying vehicle that can free its operators from the everyday restrictions of ground transportation,” said designer and CEO Marcus Leng.

BlackFly has more of a UFO look to it than other VTOLs and personal flying vehicles out there. Utilizing eight small rotors spread across two parallel wings, it takes off by sort of rolling on and off the ground via its rounded belly, which makes it look a little bit like an old school rocking horse.

Opener says it designed BlackFly with “triple-modular redundant flight systems, control surfaces, and sensors” to ensure safety and has flown over ten thousands miles of test flights. There’s also auto-landing and return-to-home features to add extra usability. The company says the single passenger, joystick-operated system requires no formal licensing in the U.S. to fly, but Opener will mandate that users take the FAA Private Pilot written examination and complete its own operator training.

The company claims BlackFly will be energy efficient, relatively quiet and is even amphibious, which apparently means it can take-off and land on fresh water.

There are some limitations, however. Its range is limited to 25 miles and speed to 62 mph in the U.S. Without restrictions, the specs call for 40-plus hours at 80 mph or more. Flying requires good weather with dry conditions, temperatures above freezing and minimal winds for take-off and landing. Its classification as an ultralight vehicle also means it can’t fly at night or over urban areas in the U.S.

Despite those hurdles, Leng told CBS News he hopes BlackFly will be on sale as soon as next year for the price of an SUV.

“We will offer competitive pricing in an endeavor to democratize three-dimensional personal transportation,” he says.

That sounds great, but there’s plenty of reason to be skeptical given the regulatory limitations and the complete dearth of commercially successful personal aerial vehicles on the market, either today or in the past. It’s going to be difficult to democratize that three-dimensional transport space until it’s actually accessible without limitations, not just during daylight hours in rural areas with good weather.

But if Opener can get enough BlackFly models out into the wild to generate some excitement and interest, perhaps the bureaucracy will begin to catch up in creating rules for the air as well as the road. Especially if bigger projects backed by the likes of Uber and Google’s Larry Page push things along.

Still, I can’t help but grimace at the notion of a new flying vehicle ready to purchase in a year from now for the cost of a non-flying vehicle. We’ve heard these promises so many times before, and practically no one has delivered on them yet. Heck, Elon Musk and Tesla have a hard enough time making their own targets on cars that don’t promise to leave the ground at all.

Will BlackFly start buzzing around soon? Or will its hubristic hopes be swatted out of the air? We’ll add it to the list of promised futures we’re waiting on and see.

1. Flying cars could save us from climate change.
2. 8 Cities that are taking steps against cars.
3. How To Have an Eco-Friendly Daily Commute!.
4. Storm to bring snow to lower elevations, rain to SoCal Wednesday.
5. German Government Consults Industry About Blockchain Technology.