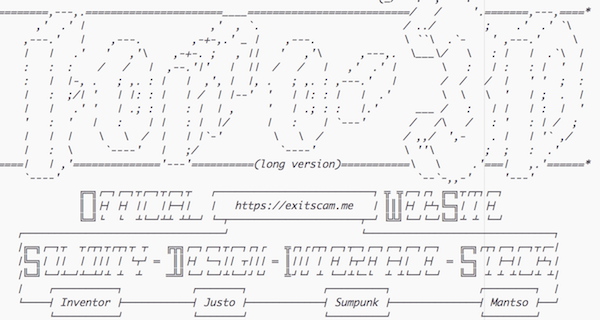 With their silly memes and flashy graphics, they are attracting some 25,000 transactions in a day, amounting to 15,000 eth ($8 million) changing hands yesterday.

Far more “transactions” however have been made in speculations. Will millions of eth be locked in there? Will miners attack? Will it ever end? Is this a game for bots or men?

Fomo3d is simple in concept. You buy a “key,” which is kind of like a token, and that key adds 30 seconds to a timer. Part of the eth you paid for the key goes to a pot, which currently has some 28,000 eth ($13 million). Part of it goes in “dividends” to those that bought a key before you.

If the timer goes to zero, whoever bought that last key takes all the money. Currently, the timer isn’t moving much from 24 hours, which is a limit. It can’t go above 24 hours.

The price for a key is meant to gradually increase, but for now it’s at 0.005 eth, or around $3. Chances of winning the pot right now are pretty much zero, and they may remain zero for some time, so the only reason to buy a key right now is for the “dividends.”

It is that part that has attracted some disdain with individuals saying this is very much a pyramid scheme where early key buyers are paid by later key buyers with the music eventually stoping and some left penniless. But will the music ever stop? Have these kids created a monstrosity?

“Communities have formed around pooling resources just to buy enough ETH to be able to purchase a key in FOMO3D. Other dapps became completely unusable sometime around the end of 2019 as the price of ETH began to climb too high for people to continue paying normal gas prices.” 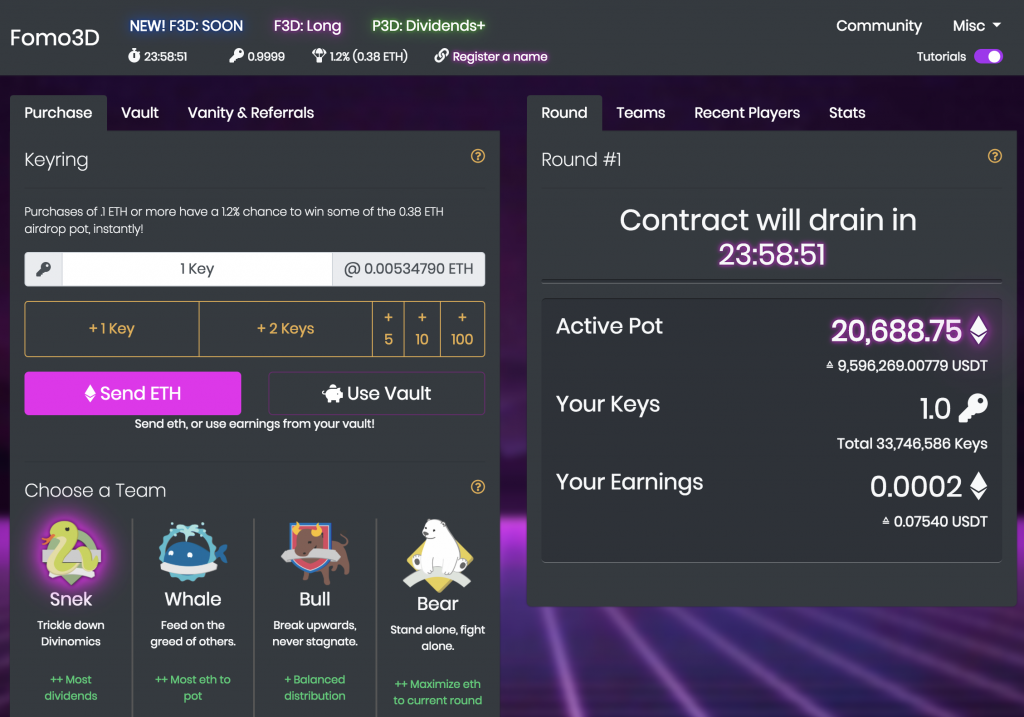 We’ve nearly made just about one cent after a day or two, so this isn’t quite a get rich quick scheme. It will take some time to recuperate our “investment,” let alone make any profit.

The five minutes of fame will, moreover, eventually wane. Bots might be the only ones left as they try to take that pot, but may miners be very tempted?

At $13 million, very much not, but if as some widely speculate a million eth is locked in there, miners could censor all other transactions to the contract and let only their own transaction pass through.

Yet miners could do many things if they collude were it not the case that ethereans would fire them, so it sounds unlikely.

Just as it sounds unlikely that any real big amount of eth will be sent to that pot because obviously no one really has a chance of winning this pot as presumably no one would let it get to zero or the cost of a key will at some point start rising very quickly to the extent that gambling on it becomes an incredibly risky matter, which is presumably when the late key buyers are left with nothing.

So activity will eventually fall considerably, which means dividends will fall too, but this does sound like a very new thing which probably has never existed before.

He refers to an article he himself wrote that explains curved bonds usage in incentivizing network effects, with our littlenode brain unable to quite get our head around it.

We think what that all means is that individuals have to decide whether to cash out their dividends, and thus see lower returns, or let it ride and potentially see higher returns.

A ponzi scheme, therefore, might be too simple a description. Gambling perhaps better, but gambling has no dividends. Justo, a developer of Fomo3rd, told us when we asked him if Fomo3d and their other game Powh3d are a pyramid scheme:

“Neither of them are pyramid schemes, no. No players are at the top of either games. P3D, for example, has distributed nearly 9,000 ethereum across a good 1000+ players so far.

It has a 10% tax on every transaction. To simulate universal basic income that tax is split to everyone who owns the coin.

Fomo3D is about as far from a pyramid scheme as possible, it’s genuinely spreading wealth from greedy players to less fortunate players.”

Name dropping universal basic income in there makes you wonder just how they got so good at marketing, but at the same time it does also make you ask whether that is really true.

General reaction seems to be negative, with some people dismissive and some even almost angry at this game, and we can see why, but we’re undecided or unclear on whether there is something here.

This idea that everyone gets paid by greedy whales who want the whole pot sounds interesting, but whales do not become whales by being stupid.

They clearly know their chance of winning the pot is zero, so at best they’d be hoping to get dividends from all non whales they might want to fomo in, and then at some point withdraw and thank for all the fish.

That point would presumably be once the key price starts rising very quickly, at which stage you’d think the game ends, but how this will play out remains to be seen.

1. The Future of Blockchain Companies.
2. Blockchain Society: Trustless Blockchain does not scale; A technical summary..
3. Beyond 2020: How blockchain is reshaping our economic, environmental and social orders Pt I.
4. New Zealand Cryptopia Exchange Hack Continues.
5. Samsung Galaxy S10 Could Expose Crypto to Millions of Tech Savvy Users.