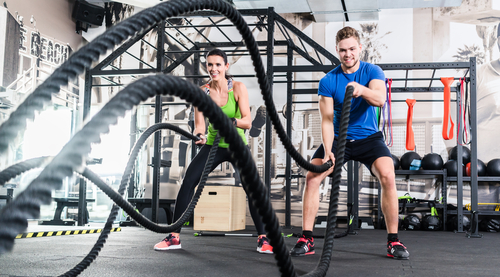 Last week we looked at some of the most memorable (and ridiculous, and potentially ineffective) fitness trends from the ’80s and ’90s. Many had one thing in common: it’s unclear if they actually worked. With the advent of the new millennium came a completely different approach to fitness and health. Gone were the days of leg warmers and leotards (thank goodness!). They were replaced by a focus on a healthier lifestyle, and a total body approach to working out.

Yes, we know that yoga has been around for a few (thousand) years, but it really took root around our country not too long ago. Suddenly yoga studios began popping up everywhere, and every gym began offering classes on the ancient practice without fail. And with good reason. Yoga’s focus on balance, strength, and flexibility makes it something that can be sustained. It works with other forms of exercise as well, offering rehabilitative benefits to the body. Plus, the added bonus of mental calmness and focus that accompanies the workout is a game changer.

It became glaringly obvious after several years of fitness trends that you have to do more than just burn a few calories to see results. Eating well and making movement a priority in daily life replaced the days of doing a step class and then eating a box of SnackWell’s diet cookies. People began choosing the stairs over elevators, walking and biking to work, and have come so far as to have standing desks (and even treadmill desks) to combat a sedentary lifestyle.

In an attempt to create a lean, toned body with good cardiovascular health, several companies began focusing on the whole body when marketing to customers. You might be familiar with P90X and Insanity (both Beachbody LLC approaches to at-home fitness) that put your entire body through the wringer. They incorporate high-intensity workouts with things like kickboxing, yoga, push-ups, and dips, to name a few. While people who try the routines tend to see results, it can be hard to sustain over a long period of time.

Gone are the days of low-fat, processed food options. Today the focus is keenly on the quality of the food we put in our bodies. Natural, unprocessed food, lots of fruits and vegetables, whole grains, more fish and less red meat can do far more than any gimmick in a package. If the last 20 years have taught us anything, it is that food can be healing and that we really are what we eat.

I’m willing to bet that if you don’t personally own a fitness tracker, then you know someone who does. Everything from the Garmin to the Fitbit to the Apple Watch can track how many steps you’ve taken, how many calories you’ve burned, and even your current heart rate. Their popularity indicates that people really do want to know how much they are moving, and want to be well-informed so that they can move more.

Aside from yoga, there has been a surge in countless specialty fitness studios across the country. Chances are, there is something for you: spin classes, Barre Method classes (popular after the success of the film Black Swan), Pilates classes, and pole dancing classes all focus on getting you fit and encourage you to have fun while doing it.

If a good old jog around the neighborhood isn’t quite right for you, then maybe you need a little more of an experience. Things like mud runs (it is exactly what it sounds like), Spartan races, and color runs have become popular in recent years, giving adults a chance to have boatloads of dirty, muddy fun while pushing their bodies to new limits.

A few decades ago, it wasn’t often that you would encounter someone who was a marathon runner. But these days, if you aren’t training for a half marathon, triathlon, Iron Man, or something similar, then you’re seriously missing out. With such events, the focus shifts from simply losing weight to working toward a serious goal (both mentally and physically.) There must be something to it, though, since most people who try one tend to go back for more.