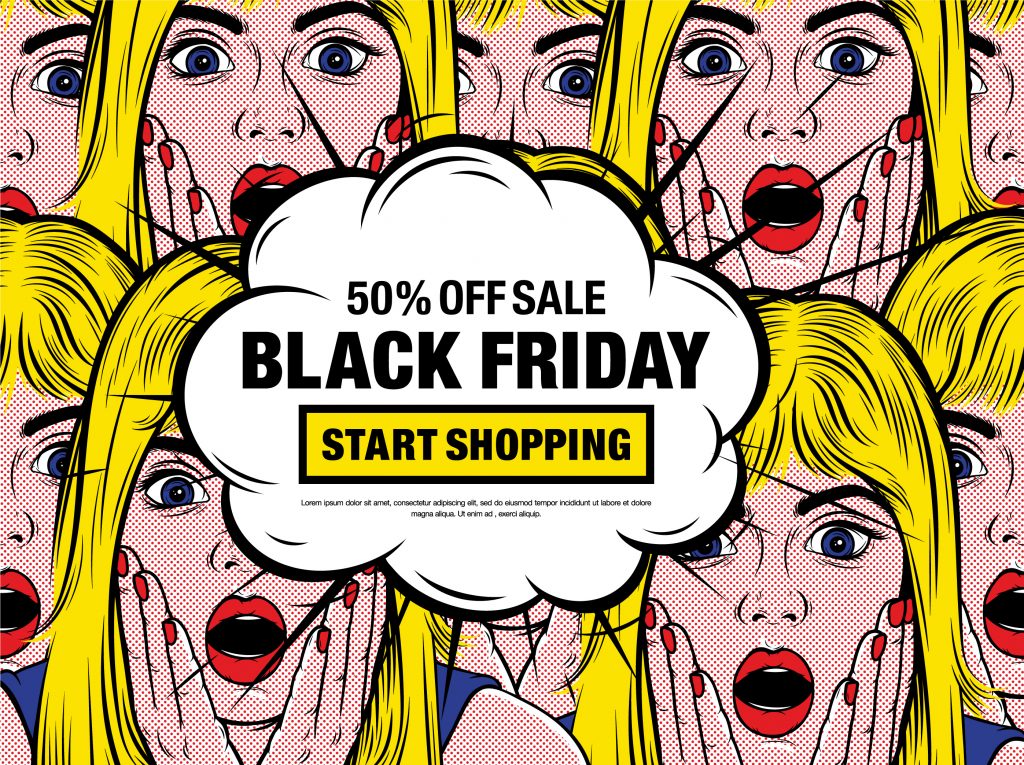 Imagine a Black Friday with No Sales

You Can Stand Out and Sell More by Marketing Different

This year, I received my first Black Friday email on November 14 — a full 10 days before the most frenzied shopping day of the year. At first, my heart raced (The sales are coming!). My FOMO kicked in (What if I miss a deal?). And then I tuned out (It’s all too much, too early!).

As a branding expert, I work with retail companies every day. I know that holiday starts in January, that you might be screwed if your campaign isn’t finalized by July and that your yearly sales numbers are CRAZY dependent on these mission-critical November days. I also know that you’re willing to do almost anything to get those numbers where you need them. Hence, MORE sales, BIGGER discounts, and EARLIER reveals.

But when everyone is screaming SALE-SALE-SALE, it’s your opportunity to do something different. They zig, you zag—you win. Here’s how to do it using the principles of persuasion.

The First Principle of Persuasion: Scarcity

The first is scarcity: people want more of things that there are less of. You could say that Black Friday, the single day to get the best deals of the year, was founded on this principle.

When Black Friday first became a thing, times were simpler. Black Friday was a special day when we shook off the turkey hangover, set the alarm extra early and lined up in the cold to see what kinds of surprises retailers literally had in store for us.

As shopping shifted to digital, the competition got more fierce. Retailers realized that they didn’t need to wait until the actual day to start their deals — and they all tried to get the jump on each other earlier and earlier. And as consumers, our feeling of scarcity also began earlier and earlier, triggering mass anxiety and overwhelm.

But what if a company, instead of trying to show us deals earlier and pressure us into sales, used the other Principles of Persuasion as a way to woo?

The Second Principle of Persuasion: Reciprocity

Dr. Cialdini’s second principle is reciprocity: people are obliged to give back to others if they have received something first. If you’re the first to give, people will want to give you something in return — especially if that gift is personalized and unexpected.

To apply this principle to your holiday marketing, think about what kind of gift you could offer your customer before Black Friday. Maybe it’s something physical that you get in the mail: a travel sized product or surprise sample or a fun piece of swag (Example: Pins and stickers are all the rage this year). Or perhaps it’s something digital: a holiday playlist, a photo filter or a code to redeem for an IRL treat that’s somehow tied in to your company (Example: A code for a free juice at a local shop, perfect for after a workout if you’re, say, a spin studio).

Getting a little something unexpected/personalized/special in the days leading up to Black Friday instead of yet another sale preview email will make your customers happier and help them associate that happiness with you once it’s time to shop for holiday — whether you’re running a mega sale or not.

The Third Principle of Persuasion: Authority

According to Dr. Cialdini’s research, another way to persuade your audience is to establish yourself as the voice of authority in a given field — because people follow the lead of credible and knowledgeable experts.

This may seem like a tricky one to incorporate into your pre-holiday marketing. When companies are yelling “sale!” and covering their marketing in glitter, how do you become an authority? There are two ways to think about this.

First, the zig/zag approach. As I just said, everyone and her mother is talking about discounts, cramming tinsel into crannies and wrapping everything up with a bow. If you decide to streamline your message — focus on say, the numbers that make you better (Example: 97% saw a visible improvement in fine lines after using our skincare) or the experts + knowledge behind your product (Example: Meet our garment technologists), you can cut through the tinsel.

Second, you could think about the voices of authority that people trust most during the holidays. Every blog/magazine/publication has a gift guide these days. It’s a no-brainer to try and get on as many of these as possible. Do that — then let people know. Send out messages highlighting all of the top gift guides you appear on and really flaunt the credentials of those associated with them (Example: The #1 cooking blog named our cast iron pot the Top Gift of 2018). Show off how much those in the know are recommending you and let their authority prop you up throughout the season.

The Fourth Principle of Persuasion: Consistency

Once people commit to something, they want to follow through, even if it costs them. And as Dr. Cialdini points out, people like to be consistent with things they’ve previously said or done.

Again, there are a few ways you could potentially apply this principle to your Black Friday marketing. The first would be to remind people of something they previously said or did with your brand that was positive. (Example: Did they shop with you last year during Black Friday? What did they get? And how much did they save?) Sending out a targeted message reminding people of the great deal they got from you last year could prime them to shop with you again this year — especially if they think about who they gave the gift to and the joy that brought them.

Second, rather than revealing your deals right away in a preview or bombarding people with messages about Black Friday, you could set up a flash sale with a few highly select, very enticing items. Maybe they aren’t even deals, just special releases. Maybe they only last for a day or an hour. They’re not big-ticket items — just small wonderful things. Then you let people buy them. This will get people used to shopping with you for Black Friday. They’ll think, “I got this small thing, now I’ll get a bigger thing later…” even if you aren’t offering them deals in the traditional sense.

The Fifth Principle of Persuasion: Liking

Dr. Cialdini’s fifth principal has to do with liking: people prefer to say yes to those who they like. We like people who are similar to us, people who give us compliments and work towards shared goals.

In the weeks leading up to Black Friday, play up these shared values as much as possible in your messaging and your content. Show how much you are like your consumer by showing them what you’re doing to further the causes you have in common. Even if you are running a sales message, see what happens if you add in messages about your shared values (Example: Black Friday Deals on the Most Ethically Made Cashmere in the World).

A second approach would be to go hard on recommendations and referrals. Most companies now have some sort of a code to pass along for a discount. Black Friday would be a prime time to push this and give people extra incentives to spread the word or perhaps even “invite” them personally to a Black Friday event. In the sea of Black Friday marketing, people are much more likely to pay attention to something coming from a friend with the recommendation that this is a great gift (Example: “I gave this to my mom last year and she loved it!).

The Sixth Principle of Persuasion: Consensus

Last but not least, Dr. Cialdini’s sixth principal has to do with consensus: the idea that people will look to the actions and behaviors of others to determine their own. People will emulate each other — and showing social proof is extremely powerful.

But how can you get a consensus on Black Friday? Again, it’s all about what you’re highlighting in your messaging and how you decide to structure it.

You may be offering a Black Friday sale — but in the days leading up to the sale and even when you reveal the sale, try talking about the number of people who have already bought your product or the percentage of people who love it. You can make this type of messaging product-specific (Example: 40% Off the Most Loved Fragrance at Sephora)or company-specific (Example: Black Friday Deals from the #1 Fragrance Brand at Sephora).

Now Be a Proud Pineapple in a Sea of Same-Same

You don’t need to be like everyone else and rely on scarcity when it ’tis the season. As you’re planning for your next Black Friday (which obviously begins on November 24 because it’s already holiday 2019 and you can’t afford to lose a second), think about how you could incorporate the other five principles of persuasion into you