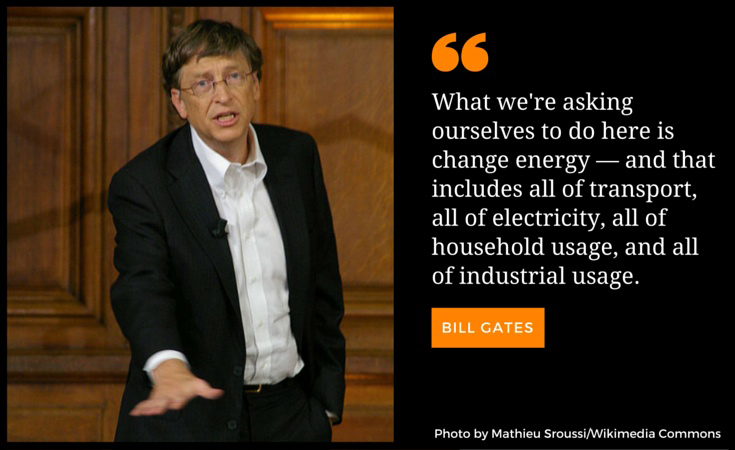 Bill Gates and the future of Renewable Energy.

Renewable Energy has been in a constant state of development as Climate Change has become the forefront of international policies.

It is predicted that in the next two decades the worldwide energy consumption will increase by 50% compared to 2010. In 2015 alone, the global CO2 emission reached 36 billion tonnes, a steep 42% increase from the year 1990. The goal is to reduce it by 80% from what was emitted in the year 1990. Unfortunately, there has been an increase of energy demand challenging the growing desire to reduce the emission of greenhouse gases.

With 1.3 billion people – which equals 18% of the world population – living without electricity, the demand of energy is justified. 70% of Sub Saharan Africa and 300 million people in India are deprived of electricity which can meet their basic demands of storing food, providing light and heat, and facilitate work and education.

The only viable balance to this increasing rift is the propagation of Renewable Energy, which is clean energy. But, Renewable Energy without sustainable models is expensive, and it needs to be cheap, easily accessible and reliable to attract investment. 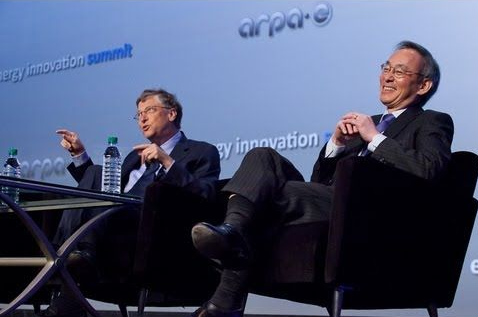 In 2014, China was the highest emitter of CO2 at 27%, followed by the United States at 15.5%, with the European Union and India amounting to 9.5% and 7.2%. The Paris Summit set goals in the right direction, with the United States proposing to reduce carbon emissions to 28% by 2025, with the yardstick being the year 2005. Two hundred countries signed to reduce emissions, with developed industrialized nations ready to invest in renewable technology, with a total of 100 billion euros per year to low income economies to build them up as robust economies, furthering an effort to propagate renewable energy unilaterally.

Throughout his career, Microsoft founder Bill Gates has been more than just a software visionary. From bettering lives to creating jobs, from his philanthropic endeavors to environmental conservation, the Tech Guru has made substantial contributions to the world.

In a podcast interview with Stuff You Should Know, Bill Gates discussed the future of Renewable Energy, its obstacles and its pathways:

“When we think about energy, one of the key things is reliability. If you just have energy when the wind blows or in sunshine that’s not very helpful. When someone is freezing in their apartment on a winter night, they need energy. If you’re going to build a factory to say, build a car, because that’ll be a huge capital cost, it needs to run 24 hours a day, so it’s got to have reliable energy. And so, the market isn’t just for energy, the market is for totally reliable energy. Unfortunately, a lot of breakthroughs we have, like the wind and sun, we don’t have those directly generate electricity.

And storing electricity is very, very hard. All the batteries in the world today would not store, uh, every laptop, every car, everything, would not store hours worth of global energy. And batteries haven’t improved much in the last 100 years. They’re less than 3 times better than the battery that Edison, if he were revived, would recognize, which was a lead chemistry battery. Really, the lithium-ion has given us an improvement, but in order to truly work from the grid, you need a factor of 10. Anyway, it is very tough to make that work. We need to pursue breakthrough paths that don’t assume storage miracle, like if you take the sun directly and make liquid fuel, just say gasoline, or any hydro carbon, or any liquid, that’s easy to store. You put it in a tank, you put it in a pipe and the whole infrastructure is geared toward liquid transport. If you could possibly do that, it would be an advantage.

High wind sounds like a crazy idea, the solar fuel, what you’re calling synthetic photosynthesis, if it doesn’t work, people will say it is silly, well of course, but that’s brilliant. When nuclear energy came along, there was a quote from the head of the atomic energy commission, that the electricity would be too cheap to meter, now unfortunately he underestimated the complexities of radiation containment, and all other safety things, which in my view means that we need a whole new generation of reactors, whose safety characteristics are dramatically better and different than what we make today is called third generation. We need this fourth generation. We need to go down a dozen different paths, and even one that is still worth exploring is carbon capture and sequestration, with a little bit of extra chemistry, you take that fuel gas, which is about 12% co2, and you convert it to liquids and then you of course have to find a long-term storage.

If we can do the invention, if we can fund the R&D and maybe even pursue pilot plans to get the economies upscale with learning curve benefits and then if we could offer to them a form of electrification that is non-polluting, then you get the best of both worlds, if you can’t, then they have a dilemma.”

Bill Gates urges for the same goals as the World Energy Council, as in the collective economic development of the world in order to invest, innovate, sustain and propagate Renewable Energy throughout the planet. 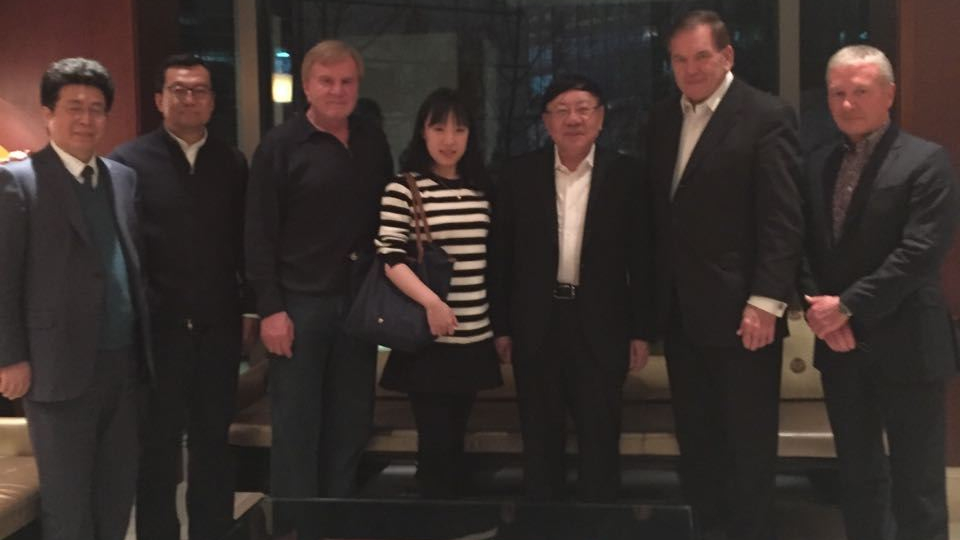