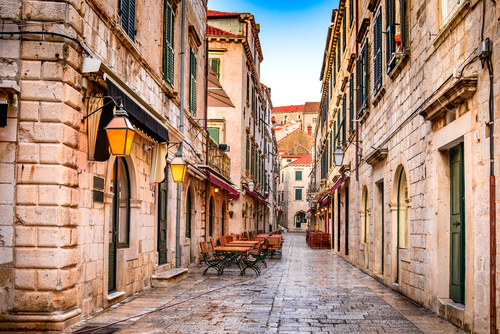 A GREEK GETAWAY FIT FOR THE GODS

You may have heard of popular tourist destinations on Croatia’s Dalmatian coastline such as Zadar or Split. But this small seaside town is probably not on your radar, yet. Šibenik has been experiencing a renaissance in recent years. Its impressive centuries-old fortresses are being restored, the old town’s historic Venetian palazzos are given a new lease on life as they’re converted into heritage hotels and restaurants, and some of the city’s historical landmarks now stage open air cultural events. Home to one of the three restaurants awarded a Michelin star in the country and recognised as a foodie hot-spot by the French gastronomic guide Gault & Millau, Šibenik has more to offer than meets the eye.

Šibenik’s best-known landmark is its impressive 15th century St Jame’s Cathedral, a Unesco World Heritage Site since 2000. Made entirely of white stone, it took 104 years to build using a unique construction technique of interlocking stone slabs and no mortar. Have a peek inside to admire the beautifully sculpted baptistery and stained glass rose window. Another fascinating detail is the frieze of 71 faces carved into the cathedral’s facade. These are the actual likenesses of local men, women and children of the time, each wearing a different (and often comical) expression.

The cathedral’s magnificent dome was damaged by shelling in 1991 during the Yugoslav wars but expertly reconstructed during restoration works. Visit the city museum housed in a 13th-century palazzo just behind the cathedral to learn how it was repaired using the original medieval building technique.

The only way to explore Šibenik’s old town is on foot. A maze of narrow cobblestone lanes lined with medieval stone houses and Venetian-style palazzi open onto picturesque squares and courtyards. Climb the stone stairways ascending to the upper town and you’ll be sure to stumble on one of its most charming treasures.

The garden of St Lawrence monastery is a walled garden laid out according to a medieval design of paths arranged in a cross pattern, a central fountain and four sections planted with over 150 medicinal herbs and other plants. Benches placed under trees offer a quiet breathing space and the courtyard café is one of the most atmospheric spots in the old town.

A city of fortresses

Šibenik is located on a narrow bay connected to the Adriatic Sea by St Anthony’s channel. This strategic position was important to the city’s development because it offered natural protection from invaders. Developed during a time when Ottoman invasions were a threat, the city was built around St Michael’s Fortress which dominates the old town and offers superb views from its ramparts. Fully restored and open to the public since 2014, its best feature is the open air theatre. This summer Róisín Murphy, Bryan Ferry and other performers will take to the stage in one of the most unique concert venues in Croatia.

The massive Barone Fortress was built in the space of only two months in the 17th century to secure the city’s defences from an approaching Ottoman army. Perched on a hill overlooking the city, there are spectacular views over the skyline of the old town, and a visitor’s centre was added during the restoration works in 2016. Through interactive exhibits using Augmented Reality computer-generated images and sounds, visitors have the chance to relive history and get an idea of what life was like at the time.

Attention and restoration efforts have now turned to the island fortress of St Nicholas, added to Unesco’s World Heritage List in 2017. Built in 1540, the fortress is strategically located at the entrance to St Anthony’s channel. At the moment, it can only be reached by boat taxi but there’s a project underway to make it accessible via the newly developed St Anthony’s walkway and cycle path that follows the adjacent coastline. Eventually the city’s four fortresses will be linked, including St John’s Fortress, the next one to be restored and developed as a historical attraction.

A new breath of life for old buildings

Other centuries-old buildings and historical structures that make up Šibenik’s rich architectural heritage are being transformed into cultural venues, hotels and other businesses. A good example is the city’s four underground water cisterns built during the 15th century to store the city’s water supply. More recently they’ve been given a new role to play in the city’s cultural life. To see these subterranean medieval structures made of red brick, head to Azimut a café, bar and performance venue situated at the bottom of the steps leading down from the cathedral. The underground reservoirs have been transformed into an exhibition space and bar area with concerts happening throughout the year. Meanwhile, the area above ground where water was once accessed via four wells is a pleasant terrace and venue for cultural events.

A way to experience the unique atmosphere of Šibenik’s old town is to stay in one of the stone buildings that have been converted into hotels. Open since 2015, Heritage Hotel Life Palace welcomes guests to this handsome 500-year-old palazzo located on the corner of a charming medieval square. A popular patisserie and café occupy the ground floor with an adjacent terrace on the square, while spread over the upper floors are 17 guest rooms. Interiors are done up in a tasteful classical style with Renaissance-style paintings and gilded mirrors decorating the walls. The top floor has been converted into a small wellness area with a jacuzzi and Finnish sauna.

Another way to experience Šibenik is through the taste buds. Long known as one of Croatia’s best restaurants, Pelegrini is now firmly on the gastronomic map thanks to its first Michelin star awarded in early 2018. With only three Michelin-starred restaurants in Croatia, this is quite an honour. Exceptional cuisine is not the only thing that lures diners, so does the historic 700-year-old palazzo it occupies just steps away from the cathedral. But the most prized tables are the ones located outside with a view of the cathedral or on the summer terrace next to the medieval wells.

“Pelegrini’s gastronomic philosophy is based on a creative combination of modern and traditional,” says Rudi Štefan, owner and head chef at Pelegrini. “The most important thing is that ingredients arrive at guests’ tables as fresh as possible. The ideal scenario is that ingredients are served only a few hours after they were picked or harvested because then they show the most and require minimal intervention.”

This obsession with freshness is probably best illustrated by the fact that the restaurant has its own professional shellfish diver, while other ingredients come from small family-run farms located close by.

One of the newer arrivals on Sibenik’s food scene is SHE Bistro – one of six local restaurants and eateries recognised in the 2018 Gault & Millau guide. Much more than just a popular eatery serving an imaginative menu of freshly prepared and mostly plant-based meals, SHE is run by a social enterprise.

“We want to promote a conscious business model on how to create a socially responsible business,” explains co-founder, academic and activist, Irena Ateljević. “The bistro is a way to work on raising ecological consciousness within the local community. Healthy and tasty food can have many levels of impact. We’re trying to raise local awareness and regenerate the local economy and society while also impacting on public health. The food served here is produced with no chemicals and the menu is vegetarian and vegan. We also aim to make a social and economic impact by supporting local seasonal suppliers through a platform we have created of local farmers. In this way we create the demand for their products by sourcing everything for the bistro locally.”

This cheerful bistro takes up the ground floor and terrace of a lovingly restored 100-year-old building while on the upper floor is a studio and atelier where events are held to promote well-being through body work and yoga as well as lectures and films. From the rooftop bar is probably one of the city’s best views over the rooftops of the old town and the sea beyond.

A beach with a view

Finally, coastal Šibenik does not disappoint beach lovers. Take a short walk along the seaside promenade northwards and you’ll reach the newly developed Banj Beach. Locals love to come here for a swim or to sunbathe on the pebble beach. The many beachside bars and cafes also make this a popular night-time hangout. From here there are scenic views across the bay of the old town’s skyline and St Michael’s Fortress.

From scenic beaches and Venetian fortresses to hidden gardens and gastronomic delights, Šibenik has plenty to lure lovers of history, architecture and fine food. Thanks to efforts to preserve its age-old buildings and create new cultural and dining experiences, this coastal city is finally and firmly on the visitor’s map.