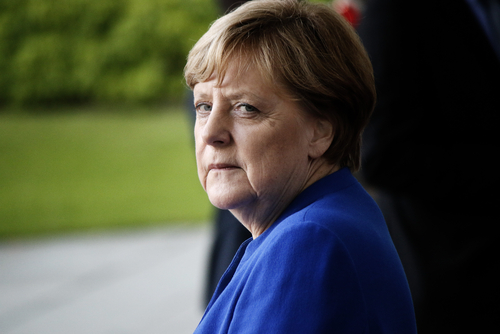 She told Germany’s parliament the issue could be a defining moment for the EU.

The call comes ahead of an EU summit focused on how to deal with the many undocumented migrants – mainly Africans – who continue to risk their lives to cross the Mediterranean.

Mrs Merkel is under pressure to come up with a deal to prevent new arrivals.

Interior Minister Horst Seehofer, from her Bavarian coalition partner the CSU, has given her until this weekend. Otherwise he has said he will start turning away migrants from the border in his home state.

The migrant flows also include refugees fleeing the Syrian war and other conflicts, urgently seeking asylum.

It is not a crisis on the scale of 2015, when thousands were coming ashore daily on the Greek islands. The European Council – the EU’s strategic leadership – says the numbers illegally entering the EU have dropped 96% since their peak in October 2015.

But this month’s tensions over migrant rescue ships barred from entry to Italian ports – most recently the German charity ship Lifeline – have put the issue firmly back in the EU spotlight.

The Lifeline was only allowed to dock in Malta after intense diplomacy among several EU states, who each agreed to take a share of the migrants on board. Malta said that Norway had now also agreed to take some migrants from the Lifeline.

The Dublin principle – that asylum seekers should stay in the country where they enter the EU – has broken down. Italy and Greece, who receive the most, are demanding that their neighbours share the burden.

Hardened Eurosceptics might love to think the EU’s in trouble, but as leaders gather in Brussels for their summer summit on Thursday, dedicated Europhiles are also sounding the alarm.

“The fragility of the EU is increasing,” warns EU Commission chief Jean-Claude Juncker. “The cracks are growing in size.”

It’s been easy to get distracted this last couple of weeks by the new Italian government and its headline-grabbing rejection of NGO migrant rescue boats.

But Mr Juncker is right: EU fissures go deeper and are more widespread.

Italy and Greece smoulder with resentment at having been left alone to deal with migrant arrivals. Meanwhile, northern countries blame the south for not patrolling their Mediterranean borders better and for having, at least in the past, enabled migrants to “slip away” northwards towards richer Germany, Austria and Sweden.

What are the new pressures on EU leaders?

Italy’s new populist government has made getting an EU-wide deal on immigration and asylum a priority.

The issue played a major role in the Italian election, catapulting nationalist League leader Matteo Salvini into power. But it is a powerful election issue EU-wide.

Austria’s right-wing government takes over the EU’s rotating presidency next month and it has a hardline stance on irregular migrants. So do its Visegrad Group neighbours: the Czech Republic, Slovakia, Hungary and Poland. That group rejected an EU scheme to relocate 160,000 refugees from overcrowded camps in Greece and Italy.

Much of the attention is on the German chancellor, because her interior minister has threatened to start blocking migrants at the border if they have already registered in another EU country. Without his party, the CSU, she would lose her parliamentary majority.

European Council President Donald Tusk told the leaders in his pre-summit letter “the stakes are very high and time is short”.

He warned that the EU’s problems with migration policy were giving ammunition to populists, who “offer simple answers to the most complicated questions”.

What solutions are on offer?

This is an Austrian-Danish proposal, aimed at breaking the business model of the people-smuggling gangs. In the draft summit conclusions, it is seen as a way to speed up the processing of asylum claims and stopping illegal economic migrants.

This would allow more failed asylum seekers to be sent back; the “return” rate currently is just 36.6%, the Commission says.