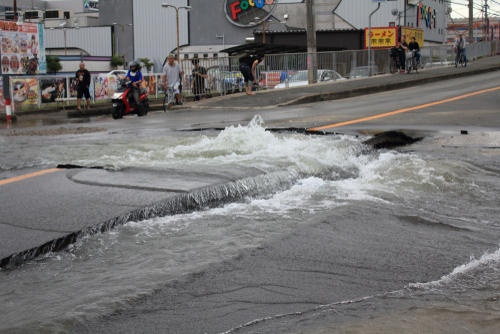 At least 100 people are thought to have died after record rainfall caused flooding and landslides in western Japan, a government spokesman says.

Dozens more are reported to be missing and electricity supplies have been hit.

Since Thursday, parts of western Japan have received three times the usual rainfall for the whole of July. Two million people have been ordered to evacuate as rivers burst their banks.

“We’ve never experienced this kind of rain before,” a weather official said.

Rescuers restarted their search through the mud for any survivors or the bodies of those killed on Monday morning.

An official in Okayama prefecture told AFP news agency that water levels were gradually receding and that emergency teams may be able to access the worst-hit areas on foot.

The heavy rains began with a typhoon last week that was followed by days of record-breaking torrential rain.

In the town of Motoyama, on Shikoku island, 583mm (23in) of rain fell between Friday morning and Saturday morning.

Many buildings have collapsed and vast areas have been covered in debris and thick mud.

Kosuke Kiyohara, 38, told AFP news agency that some of his family members, including his sister, are missing. His house in the town of Kumano was destroyed by a huge landslide.

“I have asked my family to prepare for the worst,” he said. “I haven’t been able to reach her phone since Friday night. I wish she could have fled sooner.”

Kumano is in the Hiroshima prefecture where most of the deaths have occurred.

One resident, 69-year-old Naoaki Ogawa, described how a mudslide left him trapped in his car as he tried to escape.

“I turned the car to the right, and saw another wave of mud… sweep away three cars that were in front of me,” he said.

“I have lived here for more than 20 years, but there has never been something like this. I was so scared.”

He said on Sunday that rescuers were “working against time” and increased the number of personnel deployed to help with the response to more than 70,000.

“There are still many people missing and others in need of help,” he told reporters.

Flood warnings are still in effect for some of the worst hit areas, including in Okayama prefecture.

But more settled weather is expected over the next few days which is likely to help with the rescue effort.