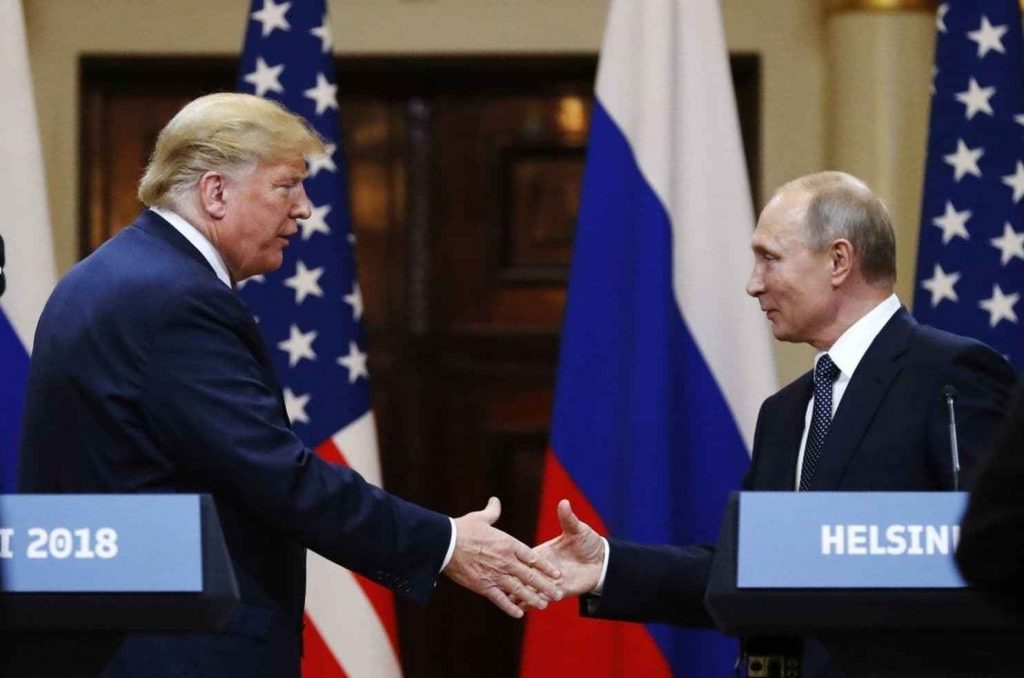 Trump rejects proposal for Russia to interrogate US citizens

US President Donald Trump has rejected a proposal made by the Russian leader Vladimir Putin that Russia be allowed to question US citizens.

The White House earlier said it would consider it but now says Mr Trump “disagrees” with the suggestion.

The offer was made at a summit of the two leaders. In return, Mr Putin suggested he might allow access to 12 Russians indicted by the US.

The idea of allowing a foreign power to quiz US citizens sparked outrage.

“It is a proposal that was made in sincerity by President Putin, but President Trump disagrees with it,” White House spokeswoman Sarah Sanders said on Thursday.

“Hopefully President Putin will have the 12 identified Russians come to the United States to prove their innocence or guilt,” she said.

She also tweeted that Mr Trump has asked his National Security Adviser John Bolton to invite Mr Putin to Washington later this year.

The idea appeared to take US Director of National Intelligence Dan Coats by surprise. He was being interviewed when he was told about the tweet.

“That’s going to be special”, he said.

What was on offer?

In what President Trump called a “tremendous” gesture, Mr Putin said he would let US prosecutors interview the 12 Russians in exchange for Russian access to US nationals the Kremlin accuses of “illegal actions”.

The individuals are related to Russia’s case against the financier Bill Browder, a fierce Putin critic who was instrumental in the US imposing sanctions in 2012 on top Russian officials accused of corruption.

Mr Browder told the BBC he was glad President Trump “isn’t going to hand me over to President Putin”.

But he added: “I’m a little amazed that this whole conversation has taken place over a three-day period when Trump should have immediately rejected it, as any other head of state would have.”

Russia was also seeking to interview Michael McFaul, another Putin critic who was US ambassador to Moscow under President Obama.

Allowing Russian officials to interview Mr McFaul would be a violation of the longstanding tradition that foreign diplomats have legal immunity.

Criticism has piled up: The Senate voted 98-0 on a resolution warning President Trump not to allow Russia to question diplomats and other officials.

By the BBC’s Anthony Zurcher in Washington

Donald Trump has tweeted that the summit with Russian President Vladimir Putin was a “great success” and people at “higher ends of intelligence” loved his Helsinki news conference. As if to underline that point, plans are already under way for a sequel – this time in Washington DC.

Never mind that the White House has spent three days trying to clean up the political fallout from the summit amid bipartisan criticism, or that the special counsel investigation into Russian meddling in 2016 continues apace.

Mr Trump may have been encouraged by recent opinion polling showing that while the public at large is uneasy with Mr Trump’s Russia policies, his Republican base – by a sizeable majority – is fine with his performance.

The president campaigned on closer ties with Russia, a goal that had been thwarted during his first year in office. With his base still behind him, Mr Trump appears ready to press on with his efforts.

What’s happened since the Trump-Putin summit?

Following his first summit with Vladimir Putin, President Trump has been fighting accusations he failed to stand up to the Russian leader.

He clarified remarks he made at a news conference after the meeting, in which he said he saw no reason why Russia would meddle in the 2016 US election – despite US intelligence concluding just that.

Speaking to CBS News on Wednesday, Mr Trump said he held Mr Putin personally responsible for interfering in the election, and that he was “very strong on the fact that we can’t have meddling”.

Both men have hailed the summit. In a series of tweets Mr Trump said he was keen to meet Mr Putin again.

Mr Putin also described the summit as “successful” but warned “there are forces in the United States that are prepared to casually sacrifice Russian-US relations”.