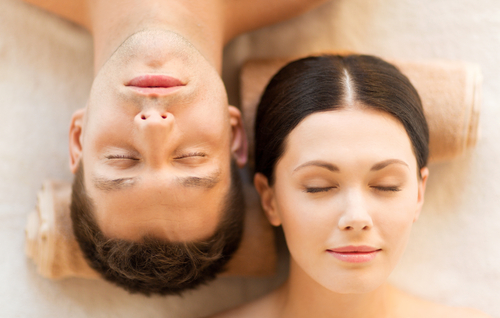 We know that beauty standards shift over time. But it turns out that who we deem to be attractive, or our ‘type’, can change much faster than that — even in as little as an instant.

Before the beard trend, I preferred the look of a clean-shaven man. Then beards went mainstream. Now, after seeing countless men donning this look, I find myself giving five o’clock shadows a second glance. Apparently, I’m not alone.

“I find men with beards more attractive. Before it was not important, but now half of the men I know have beards,” one survey respondent told The Guardian when asked about facial hair.

It’s often thought that we are hardwired by millennia of natural selection to gravitate towards certain traits, like facial symmetry. We know our standards of beauty change over time – but those shifts have been thought to be relatively long-term, responding to the media and popular culture. And even if we know that our sense of beauty still differs somewhat from person to person, most of us believe that we each have a certain ‘type’ that stays somewhat constant throughout our lifetime.

But it turns out ‘over time’ is a shorter window than it once was. Our standards of beauty don’t just change over months or years. They can change in an instant.

Beauty still is in the eye of the beholder, but our on-going work suggests that the beholder may be changing constantly – Haiyang Yang

“Beauty still is in the eye of the beholder, but our on-going work suggests that the beholder may be changing constantly,” says Haiyang Yang, assistant professor at the Johns Hopkins University Carey Business School and author of a study that found that our sense of beauty can change based on other people’s opinions. “It can be argued that the advent of the internet age may be causing people to change their beauty standards faster than ever before in human history.”

You can blame how much we’re bombarded today with images of other people – as well as, yes, internet dating.

Recent research has found that our judgments of attractiveness not only change, but that we actually see the next face as more or less attractive, based on faces we have just seen. With a dating site or app, of course, this happens repeatedly and in mere milliseconds.

The reason comes down to how the brain handles new information. “Your brain can’t process all the information that’s continuously flooding into your visual system from your eyes, so it creates shortcuts where it can,” says Jessica Taubert, lead author of the study at the University of Sydney, where she is a postdoctoral researcher. “Your brain relies on previous visual cues so it doesn’t have to constantly reanalyse that information.”

In this case, the shortcut used is what scientists refer to as ‘serial dependence’: we expect the physical state of an object to remain stable from one moment to the next. For example, when you glance at a coffee mug and look away, you expect its identity to be the same when you look at it again.

A similar concept applies in online dating. As millions of lovebirds scour digital profiles, their brains assume while they are fixated on a face that its identity will remain the same – attractive or not attractive. They quickly swipe to the next profile and are presented with what could be best described as an illusion. Their brains haven’t had time to reanalyse the information as a new face belonging to a new person, so they perceive the next face as they perceived the last.

“The fact that our brains quickly adapt to our visual environment is not new. What is new is the speed at which our environment can change,” says Teresa Pegors, a former assistant professor of psychology at Azusa Pacific University and co-author of the study.

“This can make beauty a constantly shifting target and is one piece, though certainly not the only or even most important piece, in the equation of why it is harder to be content with a single partner over the long haul.”

If you find yourself ‘liking’ more people online than you do in the real world, there may be another reason, too. It has to do with the speed with which you click through your options.

Researchers have found that when we catch a glimpse of someone, we are more likely to find them attractive than if we look at them for a longer period of time. This phenomenon happens because whenever we see something, we aren’t just ‘seeing’ it – we’re attaching a judgment about its value.

In the case of beauty, the people we find attractive are seen as higher-value because they could be a potential match or mate. And so, given the scant information that comes from a quick glance, our brains are biased towards perceiving the option of greater importance: higher attractiveness.

“If you accidentally think that someone is more attractive than they really are, all you need is a second glance to correct your mistake,” says David Eagleman, a Stanford University neuroscientist and the study’s co-author. “But if you accidentally undervalue their attractiveness, that might result in missing a potential mate.”

The ‘glimpse effect’ may be happening when users swipe too quickly on dating apps.

The brain doesn’t have time to fully digest all the information in such a short time, so it brings its assumptions to the table. “Dating apps have the same pressure as evolution: it’s better to quickly swipe right, see if there’s a match, and then reconfirm your attraction, rather than swipe left and make a mistake. We’ve all heard stories of the perfect partner someone accidentally swiped left too fast on,” says Eagleman.

We already knew that our perceptions of the world are strongly affected by our context, our mood, and the actions of others. This has always been true.

But when it comes to viewing new mates, in particular, we’re now dealing with much more information, provided at a much faster clip, than ever before – which makes it likely that our own perceptions fluctuate more quickly.

Pegors sees a potential upside: all of this shows that we can change our brains by exposing ourselves to different information.

“Our visual perception of beauty changes with every face we see. This means we can make our standard of beauty more realistic by simply changing our visual experiences,” she says. “We are not ‘stuck’ with an impossible standard that the digital era is feeding us. We can choose to look at less of these images.”

All it would require is logging out of our favourite dating app… which may, of course, be easier said than done.