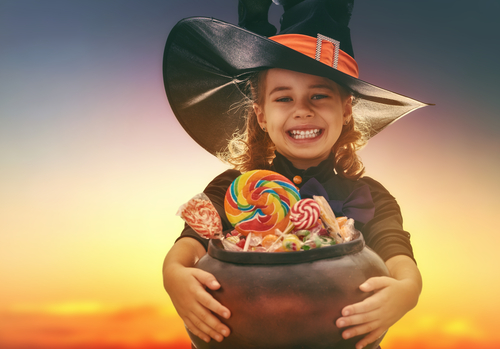 A study examining America’s Halloween candy-eating habits found many sneaky parents won’t hesitate to steal treats from their own child when their little one isn’t looking or has gone to bed.

Sweet-toothed moms and dads don’t just stop at one or two pieces either: The average candy-snatching parent devours a fourth of their child’s total Halloween haul, according to the results.

And parents may not be dressing up to go trick-or-treating, but 44 percent will eat more candy than their children this Halloween.

The survey of 2,000 American adults (1,000 parents and 1,000 non-parents), commissioned by Crest and conducted by OnePoll, revealed adults’ spending and consuming habits when it comes to Halloween candy.

Non-parents share this obsession too; regardless of if they have kids, 73 percent of adults report purchasing more candy than they’ll need for trick-or-treaters so they can have the extra to binge themselves.

The results confirmed that Halloween isn’t just for kids — 4 in 10 adults say they enjoy the holiday even more now than when they were a child. For 37 percent of these adults, the reason why is because there’s no limit on the amount of candy they can consume.

A responsible 58 percent of adults do limit their candy consumption on Halloween night, however, and 75 percent of parents limit the amount of candy their children eat on the holiday.

Many parents take additional steps to keep their children from over-indulging or being unhealthy around Halloween.

Seven in 10 parents enforce a stricter teeth-brushing and -flossing routine on Halloween, and 41 percent compensate for Halloween candy by serving a healthier dinner on the holiday itself or the next night.

After Halloween, 63 percent of parents report letting their children eat a limited number of pieces per day. Twenty-nine percent say they hide the candy and 26 percent exchange their children’s stash of sweets for small toys or gifts.

“Halloween is one of those holidays that everyone can enjoy and it’s the perfect time for kids of all ages and adults to enjoy costumes, tricks and best of all, treats,” said Carlos De Jesus, vice president North America Oral Care, Procter and Gamble. De Jesus also suggested that, no matter how they enjoy those treats, it’s important to remember to brush regularly, especially around Halloween.

Survey participants also admitted it can be tempting to over-indulge on extra candy in the days or weeks after the holiday. Half of adults say they eat the leftover candy, while 39 percent leave it out for guests to grab or decorate with it, and 35 percent report bringing extra candy to their office.

But this plan isn’t always successful – the last time they planned to bring candy to share with co-workers, they average adult ended up eating the majority before making it to the office.

One way or another, leftover candy doesn’t last for long. About 40 percent of adults report Halloween candy lasting between a week and a month in their house before it disappears.

Seventeen percent of adults report donating some of their leftover candy, and over half of respondents throw out at least a portion of their holiday haul.

“Halloween is also a time to consider sharing with others,” continued De Jesus. “If you or your kids have plenty to keep you in sweets until Thanksgiving, research local charities that accept candy donations, such as a children’s hospital, so others who may be unable to trick-or-treat can smile and have fun too.”