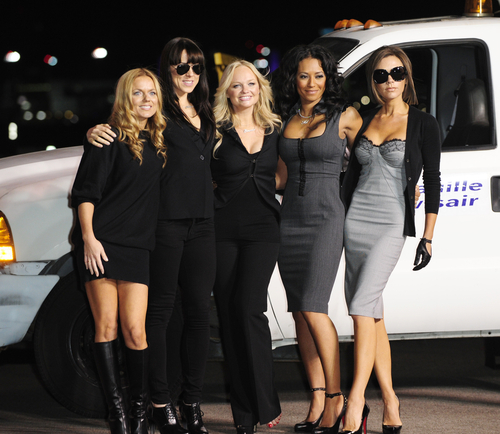 The Spice Girls are going on tour — but without Posh Spice.

The British girl band announced Monday they will be reuniting for a tour without Victoria Beckham, who reportedly opted out of joining her former bandmates to focus on her fashion label. Tickets for the stops in the United Kingdom will go on sale Saturday.

Just hours before the announcement, the band released a photo showing the four members and included the hashtags #GirlPower and #FriendshipNeverEnds in the bios of their new account on Twitter and Instagram.

Tour rumors began earlier this year after the five women posted a photo of themselves together.

“Love my girls!!! So many kisses!!! X Exciting x #friendshipneverends#girlpower,” Beckham wrote on Instagram in February.

The fashion designer quickly shut down rumors of a reunion tour.

It doesn’t seem like there’s bad blood between Beckham and the rest of the group. Several photos were posted on the Spice Girls’ Instagram on Monday of the five women. Beckham also shared a photo of her and Chisholm over the weekend.

Brown, however, took a jab at Beckham last week when she dressed up as the 44-year-old fashion designer and held up the sign that read, “No I am not going on tour.” A friend dressed up as David Beckham and also had a sign that said, “Please, please, please do it for the Spice Girls fans.”

“I think she thought it was funny, there’s a bit of a love-hate relationship there,” Brown said, according to the BBC.

The Spice Girls announced their split in 2000, but reunited in 2007 for a tour. All five Spice Girls members last performed together during the closing ceremony of the 2012 Summer Olympics in London.

They performed as a four-member group from 1998 to 2000 after Horner, then known as Geri Halliwell, left.