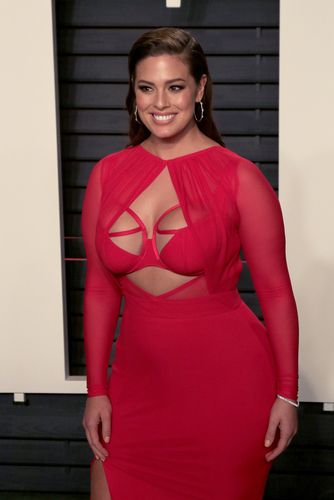 Ashley Graham is standing up to her critics!

The curvaceous beauty is Glamour’s digital cover girl this month and in the exclusive, Graham addresses hurtful comments continually flung her way by individuals on Instagram who are claiming she’s looking too thin lately.

“It sucked that everybody had to go in on me like, ‘Oh, you lost so much weight.’ If these people actually knew me—which, you know, they don’t and maybe never will—they would know that my body just hasn’t changed,” she tells the publication. “To be completely honest, I’ve gained weight in the last five years, not lost weight. If you actually look at my IMG Polaroids from when I first signed with them to now, you can tell I’m thicker. I mean, it’s just age. Geez. Whatever!”

Despite the hurt feelings, the 31-year-old model admits that she continues to read comments on Instagram and often manages to see the humor in all the nastiness.

“There will be one or two every once in a while, where it’ll sting,” Graham says. “I’ll be like, Why did they say that? That is so rude. Did their mother and father just not teach them that if you have nothing good to say don’t say it at all? …You know, sometimes I write them back—like, one guy said to me, ‘Oh, you look pregnant,’ and I wrote back, ‘Oh no, honey, that’s just fat.'”

As Graham told ET earlier this year, she credits her success to her brazen attitude and willingness to face people who aren’t necessarily rooting for her.

“The boldest move I’ve ever made for my career is standing up to people in power… and making career moves and career changes,” she said at Revlon’s Live Boldly Campaign celebration in January. “And knowing that no matter what, the move you’re about to make is the one that could either change your life and your career or everything could fall apart.”