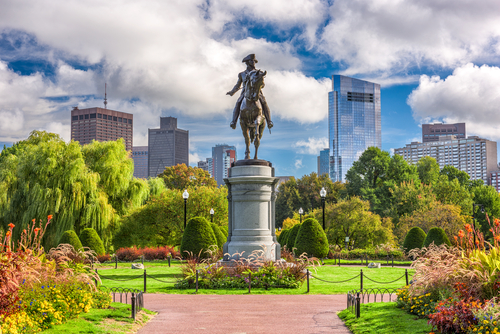 “Obviously, it will be a historic artifact of tomorrow so I won’t be consuming it,” said the mayor of Northampton, who became one of the first customers.

NORTHAMPTON, Mass. — The Bay State made history Tuesday with the launch of the first recreational marijuana stores on the East Coast — more than two years after voters decided to legalize non-medical cannabis.

Medical marijuana facilities Cultivate Holdings, in Leicester, and New England Treatment Access (NETA), in Northampton, opened their doors at 8 a.m. to kick off the state’s first legal recreational marijuana sales to people over the age of 21.

Two U.S. military veterans, one of whom is the mayor here, became the first customers to kick off a new, green era. Massachusetts first voted to legalize medical marijuana in 2012 and then voted to legalize recreational pot in 2016.

Northampton Mayor David Narkewicz, who was in the Air Force, told reporters on Tuesday that he made a “symbolic” purchase of a cannabis-infused chocolate bar, which he would be preserving instead of consuming.

Store employees clapped and cheered after Narkewicz made his purchase at NETA.

“I’m proud that Northampton is playing a role in this historic day ending some 80 years of prohibition here in the commonwealth of Massachusetts and moving into a new modern era where we have safe, tested, well-regulated adult use of marijuana and cannabis,” he said, to more cheers.

At a news conference on the eve of the recreational sales, the mayor said he planned to preserve his purchase.

“My plan actually will be to preserve it and display it because it will be a historic purchase here in the city,” he said.

Stephen Mandile, an Army veteran who served in Iraq — and medical marijuana advocate — was the first to buy cannabis at the second store, Cultivate Holdings, in Leicester, on Tuesday morning.

“I probably dreamed about it back in high school that this day would happen sometime, but to be actually able to do it today is amazing,” he said, according to NBC Boston. “To have veterans be recognized, not just myself, but to bring other veterans with me and to have it focused around that, it’s super special to me.”

By the time the doors opened at NETA Tuesday morning, the line wrapped around the building with hundreds of people stood in the cold rain and snow. Workers from the dispensary gave out hot coffee, donuts, and muffins.

According to the 2010 census, Leicester had a population of nearly 10,500 people, and Northampton’s population is more than 28,500.

Amanda Rositano, NETA’s director of organizational compliance, said at the Monday news conference with the mayor that the business was still prioritizing its medical marijuana patients amid the recreational sales and would be working to inform customers about marijuana use as well as the rules and regulations for consumption.

Mitch Rosenfield, owner of nearby store The Hempest, which sells hemp, cannabidiol/CBD products and smoking accessories, said he welcomed the move.

“Being the first state on the East Coast to do this, I think we’ll see a lot of people from New York, from all over the Northeast who want to check what this is all about,” he said.

Rosenfield said he was glad the state took the time to get things right but noted a few things may have been overthought and “we’ve missed out on a lot of tax revenue” with the delay.

His store did signature drives, fundraisers and education initiatives in support of legalizing marijuana ahead of the vote, he said.

“We’ve been trying to make this happen we fought pretty hard,” he said. “We’re thrilled to actually see it come to light.”

Kaitlin Scutari, the manager of Pinch Curated Crafted Goods, which sells artisanal housewares, jewelry and other items, said she hoped the sales would bring in more business.

“It’s supposed to bring a lot of new people in Northampton maybe people who haven’t been here before so we’re looking to seeing some new faces in our shop,” she said.

Steven Hoffman, the chairman of the Massachusetts Cannabis Control Commission, told NBC News it had been a “pretty intense” and “nonstop” process to get to this point since the commission was appointed in September 2017.

“I think the biggest challenge is just trying to get it right there’s no road map here, plus this is a very controversial issue,” he said.

Hoffman added the commission were working to “balance the will of the voters in terms of accessibility, with public health and public safety issues.”

“It’s not going to be in every city and town in the state, it’s not gonna be on every street corner, but it’s going to be accessible,” he said.

Hoffman said Massachusetts “benefited enormously” from the lessons learned by the states who legalized recreational marijuana before, but that all states were different in demographics and laws.

“So you can’t just lift and shift from other states, but we certainly can learn lessons about things that they’ve done that worked well and things that they wish they could have done differently,” he said.

In Massachusetts, pot shops will be limited in how much they can sell in a single purchase — one ounce of flower or five grahams of concentrate — and both public consumption and driving under the influence of marijuana are still illegal.

Sam Barber, president of Cultivate, said the store would be following those amount regulations for its opening day and it could not make any guarantees on how long its supplies would last. Meanwhile, NETA has set its initial purchase limit at an eighth-ounce of flower per customer.

Nationwide, 10 states and Washington, D.C., have legalized marijuana for recreational use, while 33 states allow medical marijuana.

Hoffman said one thing he believed set Massachusetts’ law apart was strict requirements for diversity “not just in terms of employment in the industry but in terms of equity ownership.” That also includes a requirement to “help those communities that have been disproportionately impacted by the previous war on drugs to make sure they’re full participants,” he added.

Britte McBride, the commissioner of the Massachusetts Cannabis Control Commission, told NBC News that while the industry would be expanding, the state required a multi-step application process which included stringent background checks and inspections to ensure new business would be compliant with the law.

Mandile, the Army veteran had previously told the Boston Globe that he was able to kick a crippling painkiller addiction by using marijuana to treat his PTSD, traumatic brain injury and chronic pain.

“I get to make history,” Mandile told the Globe. “It means a lot, and I never expected this would be the outcome of my advocacy — I was just trying to go about helping people. I’m pumped to break the stigma and the weird, scary aura people want to put around cannabis.”