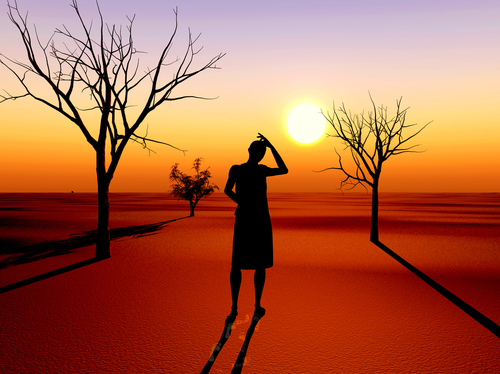 The Insidious Ways Women Bear the Brunt of Climate Change

There’s a fetid haze in the air when I call emergency medicine physician Dr. Cecilia Sorensen, who is fresh off an ER shift at UCHealth University of Colorado Hospital in Aurora, Colorado. I’m in California, some 150 miles from Paradise, where the Camp Fire has practically leveled an entire town. It’s not yet the deadliest and most destructive fire in California’s history, but air pollution levels are climbing across the state.

As a doctor, Sorensen knows that when wildfire particulate matter spikes, so do ICU admissions for respiratory and cardiovascular symptoms like asthma attacks. As a climate change researcher, she’s focused on the link between a warming world and these health impacts. A more arid climate and worsening drought have encouraged the spread of wildfires, she says, which in turn are “causing issues in health care systems… but we don’t really talk about the fact that these issues are partially due to climate change.”

Through her research, Sorensen seeks to add gender to the conversation, too, spotlighting the insidious and often ignored ways that climate change impacts women’s health more severely than it does men’s.

“In the medical world, there’s really not a lot of people who talk about climate change.”

Take pollutants in the air like those caused by fire. As Sorensen and fellow researchers pointed out in a recent article, inhaled particles appear to settle in women’s airways and lungs at higher rates than men’s, which could lead to higher risk of cardiovascular, pulmonary, and respiratory diseases among women compared to men breathing the same air. Add physiologic factors like these to the cultural and socioeconomic challenges that women face around the world, and Sorensen tells Medium that climate change is poised to magnify gender-based health disparities.

This interview has been edited and condensed.

Sorensen: You can break it down by saying there are biologic and physiologic vulnerabilities, and then there are cultural and social vulnerabilities. Those vary geographically. For example, there was this huge cyclone in Myanmar, Cyclone Nargis in 2008, and the significant majority of the people who died were women. So what was going on there? Partially, what it came down to was cultural: Women were staying at home with children, and they weren’t supposed to be walking on the street alone. They were waiting for their male relative to come home before they fled. They may not have known how to swim. After the disaster, you’re looking at a population where women are malnourished, both in the macronutrient and micronutrient standpoint at baseline, and they’re disproportionately affected by food insecurity following disasters. For every threat, women have really unique vulnerabilities.

Another important point is that when there is forced migration, women are way more at risk than men are of human trafficking. In general, women are at huge risks during these situations, both for their personal safety and the fact that they lose access to health care. I was just on the border of Syria for the month of July working in a refugee camp. About 60 percent of the camp was women. We came there with a bunch of pediatricians and a bunch of internists. We think we know what we’re doing, but we didn’t bring enough OB/GYNs to this camp to see women who clearly needed female-specific issues taken care of.

Another good example is that when women are pregnant or they’re breastfeeding, they need different nutrients. If there’s food scarcity in an area, for example due to changing weather patterns affecting the harvest, their health is going to be sacrificed because they’re not going to get enough nutrition, either for themselves or their growing babies. Community-based solutions are so imperative, because there’s no one-size-fits-all response.

What’s an example of a solution that centers around women?

Right now, women make up 60 to 70 percent of all subsistence farmers in the world. There are a lot of education efforts around sustainable farming: building community groups of women to teach each other techniques for growing drought-resistant crops and a suite of different vegetables and fruits so that if one crop fails, there isn’t a complete famine for the family. Building community among women is a really powerful way for knowledge to be shared.

If we start embedding gender-specific goals in the development of other sectors, we’re going to start seeing more cooperation and more gains. Empowering women to be great farmers could turn out to improve air quality, help solve transportation issues, or improve women’s health through more economic prosperity.

Have you come up against a lack of understanding of how gender and climate change interact within research and medical communities?

It’s such a siloed world, right? There are people who study gender and women’s rights, then over here we have climate change, and then over here we have poverty. As a result of that, there’s not a lot of interaction or cross talk. I’ve seen some focus on ways to improve poverty by improving the economic and physical health of women, but I haven’t really seen that mixed in with climate. In the medical world, there’s really not a lot of people who talk about climate change. The physicians are so overburdened with everything else that it’s hard to make it relevant. That’s some of the work that I do: trying to make it relevant.

As your work highlights, climate change poses the most serious health risks to women in low-income countries, both in the context of disasters and more gradual change. What parallels have you observed between those risks and challenges in the U.S.?

They exist, especially with the disaster risk issue. After Hurricane Katrina, there were reports of sexual assaults that happened in emergency shelters when women were left without gender-specific shelters, for example. Sexual violence happens everywhere after disasters. We’ve also seen that after disasters, women who lost jobs and have low socioeconomic status are less likely than men to find new jobs where they were displaced. So we still see these gender-based differences, both in the U.S. and abroad, but we’re a little bit more buffered here. We’re not seeing huge migrations in the U.S. because of drought quite yet, whereas people in other parts of the world are more vulnerable to fluctuations in environment. I think it’s a matter of time before we start seeing that here.

What do you see as the most promising levers for addressing climate change right now?

I’ve come to see cities as being the unit of change. The city can provide incentives for green space adaptation, work on zoning issues, work on urban planning issues. States too — it’s these smaller units where we’re getting grassroots movement right now. When we talk about adaptation and resilience, it happens really within communities. I also see some industries stepping up. I think that’s a really powerful tool as well, when industries decide they’re going to be leaders, make their industries clean, and lower their environmental impact.

What’s next for you?

I’m working on a study looking at federal spending on climate change research, going through grant databases and seeing what the government has been funding. No one’s really done a thorough analysis of what our government is spending on climate change research in terms of health. I’m also directing a course this spring at the University of Colorado School of Medicine called Climate Medicine. We’re creating a field of study.