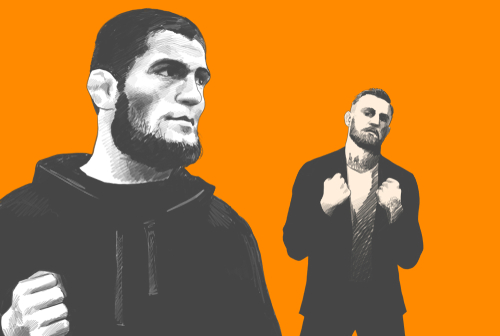 When a National Guardsman was killed while apparently trying to break up a fight outside an establishment variously described as a cafe and nightclub early Sunday morning, Nurmagomedov called for a crackdown on the local nightlife in his mostly-Muslim home region of Dagestan.

“What good do these nightclubs bring to our society?” Nurmagomedov posted Monday on Instagram, where he has more than 13 million followers.

On Monday, he reposted a video by Dagestani actor Eldar Iraziev calling for nightclubs to be closed, saying he “completely” supports that message. In his video, Iraziev condemns nightclubs for “alcohol like a river, depraved women and in the end there are shootings.”

It’s not the first time Nurmagomedov has voiced disapproval of other people’s nightlife choices.

“All alcoholics will have the same end,” he wrote after a news conference ahead of the fight against McGregor, who had lambasted him for refusing an offer of whiskey.

In August, Nurmagomedov posted a video of a largely-female crowd singing along at a hip-hop concert with the comment: “Modern Dagestan. Is this really what our revered ancestors left us to inherit?”

The Muslim peoples of Russia’s North Caucasus are often marginalized economically and socially in Russia, with higher levels of poverty than the national average and generally conservative views on issues such as women in the workforce. The region’s passion for combat sports offers young men a path to fame — and an audience for their views.

Nurmagomedov has repeatedly met with the authoritarian ruler of the neighboring region of Chechnya, Ramzan Kadyrov. Authorities in Chechnya heavily restrict the sale of alcohol, promote an Islamic dress code for women and have been accused of human rights abuses including torture of gay men.

Nurmagomedov’s stance on nightclubs has been echoed by Olympic wrestling champion Abdulrashid Sadulaev, nicknamed the “Russian Tank” for his strength in the ring.

“My dear brothers and countrymen,” Sadulaev wrote to his Instagram audience of 650,000 after Sunday’s shooting, which authorities have blamed on suspects including a former martial arts champion. “We are mountain men who call ourselves Muslims. There is nothing in these seedy places (nightclubs) for us except harm … For us, there is no place for these clubs.”

So far, there’s no sign of a crackdown on nightlife. Regional youth minister Kamil Saidov told the Govorit Moskva radio station that Sunday’s shooting was “an everyday conflict” and said there should be better security, not closures.

“If we don’t have places for young people to relax (they’ll leave Dagestan),” he said.