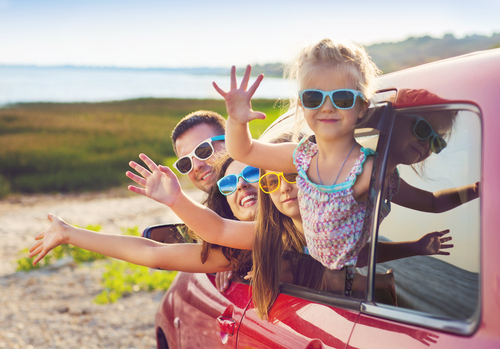 Holiday travel with children: Follow this checklist to keep kids safe and smiling

t’s holiday travel season, and millions of Americans will be taking to roads, rails and skies, many with children in tow. Family travel policies are continually changing, so it can pay to double-check the particulars before you leave home. Being inconvenienced on vacation is bad enough, but being inconvenienced with kids can turn any trip very sour, very fast.

A quick online search will confirm there is no shortage of advice for those traveling with kids. In fact, it’s often a case of information overload, since there are dozens of “mommy blogs” and other sites eager to impart information, and some of them have a financial stake in the advice they’re offering. A good rule is – whenever possible – go directly to the source, such as the airline, hotel, car rental firm, etc.

What follows is a sector-by-sector rundown of necessary information when you set out from home with small ones in tow.

Before planning a trip outside the United States – even to nearby countries such as Canada or Mexico, or destinations in the Caribbean – make sure that your child has all the necessary passport, visa and immunization paperwork. The State Department’s site provides answers for every nation in the world. Also, be aware that if you’re traveling alone with a child, the State Department warns that “foreign border officials may require custody documents or notarized written consent from the other parent.

Along with the necessary paperwork, it’s also important to pack properly for your little ones, while keeping in mind Transportation Security Administration rules and airline carry-on restrictions. If you encounter flight delays, diversions or cancellations, no amount of books, games, puzzles or distractions will be enough. Extra snacks and spare clothes for spills are vital too, as are any necessary medications. All this should be in a carry-on, not a checked bag that can be lost or pilfered.

Speaking of medications, you may encounter particular medical challenges when traveling. The most important advice is that each child has specific needs and concerns, so always check with your pediatrician for individualized guidance. As for concerns about other medical and health issues, check out KidsTravelDoc. Dr. Karl Neumann is a leading expert on the topic, and he offers a range of advice on such issues as motion sickness (in the air, on the road and on the seas), aircraft cabin air and pressurization, sunburn, food and water precautions, and many other topics.

And if you’re traveling internationally, you’ll want to check with the Centers for Disease Control and Prevention’s Traveling with Children page, which provides details on vaccines, pre-travel care and many common afflictions encountered overseas.

When it comes to service, not all airlines are created equal, and that’s just as true for kids as it is for adults. Consider JetBlue, which touts the branded JetBlue Junior program, designed to make flying with kids easier. It includes free snacks and juice, entertainment channels for children and kid-appropriate movies on flights longer than two hours.

Here are other important considerations when flying:

• Safety first. For years I’ve been writing here about the necessity for ALL kids to travel in approved child restraints on commercial flights, even though the Federal Aviation Administration and U.S. airlines allow children under 2 to fly as “lap kids.” Bottom line: No expert in the world maintains that a lap child is as safe or safer than in a restraint. That said, last year I noted in Consumer Reports that among U.S. carriers, Southwest is best at offering infant discounts on domestic flights, though it may only be 5 percent off unrestricted fares. However, many airlines offer higher discounts on international flights.

• Pre-boarding. While most carriers allow families with small children to get settled into their seats early, the rules can vary from airline to airline. For example, Delta pre-boards “families with car seats or strollers” while American allows pre-boarding for those 2 and under. Meanwhile, Southwest’s “Family Boarding” policy allows kids under 6, although this group is called after the A group but before the B group.

• Strollers. Most airlines allow strollers to be gate-checked at no charge (and child seats, which you SHOULD NOT check but use instead).

• Breastfeeding. Most domestic carriers welcome breastfeeding and breast pumps, but storing breast milk can be an issue. Flying With A Baby provides more details, but it’s best to consult directly with the carrier. You also need to check with the TSA or foreign officials about bringing breast milk through security screening.

• Meals. Visit the airline’s website and you should find all you need to know about special meals for kids, as well as bottle-warming policies (some airlines will, some won’t).

• Entertainment. Many carriers offer entertainment choices that are appropriate for young kids; however, the challenge may be a seatmate who has elected an inappropriate choice.

If you’re connecting at a hub airport and have a choice of locations, you may want to quickly check on the facility where you could very well be spending anywhere from a few hours on up. A quick search on the airport’s website will determine if it provides play areas for little ones and/or free Wi-Fi for tweens and teens (some locations start charging after a short complimentary session). Also, don’t assume all airports have nursing stations. And on a personal note, as a single dad, I would politely suggest better information from journalists and airport authorities alike on highlighting changing facilities in men’s rooms, which thankfully have become more ubiquitous in the 20 years since I last schlepped a diaper bag.

One of the most detailed guides is provided by Lissa Poirot at Family Vacation Critic, which highlights the best domestic airports for infants, toddlers and teens – as well as the worst. The good news is many of the nation’s major hubs make the cut; this list includes mega-facilities such as Chicago O’Hare, Dallas-Fort Worth and LAX. But Poirot also provides a “We Wish They Would Do Better” list, which among other considerations lists major airports that don’t have play areas, including Detroit, Honolulu, Houston George Bush, New York LaGuardia and Newark (while New York JFK offers a play area only at the JetBlue terminal).

It’s fairly easy in most cases to thoroughly check out a given property’s amenities and services for children. In fact, many large chains have specific programs in place. Consider the following:

• Some chains, such as Holiday Inn, offer kids to stay free and even eat free. Of course, there is fine print, which limits the number of kids, only allows ordering off the children’s menu and prohibits room service.

• Camp Hyatt is a program offered at 18 locations in the U.S., Mexico and the Caribbean, for kids ranging from either 3 or 5 on up to 12. The focus is on “culture, history and environment” pegged to the locale. Think hula dancing or painting pottery.

In addition, here’s some specific advice to keep in mind:

• Meals. If your property doesn’t have a children’s menu, then why stay there? It’s an easy thing to check in advance, and to share with older kids so there are no surprises after you check in. And as noted, some resorts and package deals offer free meals for kids – ask in advance.

• Cribs. Two pieces of advice when you reserve this oh-so-critical item of furniture. Don’t wait until you get to the front desk late at night with a sleeping child in your arms to confirm the request. And don’t rely on the national reservations center or chain website; follow up in advance by calling the property itself directly to make sure the crib will be waiting for you.

• Pools/recreation. Many hotel pools and other recreation sites are “use at your own risk.” Consider whether lifeguards or other professionals will be present when your kids are using the facilities.

• In-house libraries. Books, DVDs, board games, toys – you’d be surprised what you can request at certain properties. Google it in advance of your stay.

• More upscale properties may have “concierges” specifically geared toward kids and teens.

As for babysitting services, they are available (for an hourly fee) at some properties, but clearly due diligence is required; ultimately, each parent or caregiver will need to determine their comfort levels on a case-by-case basis.

You’ve already decided to fly with your own child safety seat, right? But if your itinerary requires you to reserve a car seat from a rental agency, once again you don’t want to find yourself at the rental counter late at night when you’re informed there are no more seats available (as happened to me more than once when my son was young). Again, confirming directly with the location in advance is advisable. That said, you also may want to learn what Consumer Reports found when it examined car rental child seats – in short, horrific tales of expired equipment, missing labels and broken parts.

Finally, what should you do if you find your supply lines are running critically short on vacation? Consider Baby’s Away, the child equipment rental service with locations in 31 states.