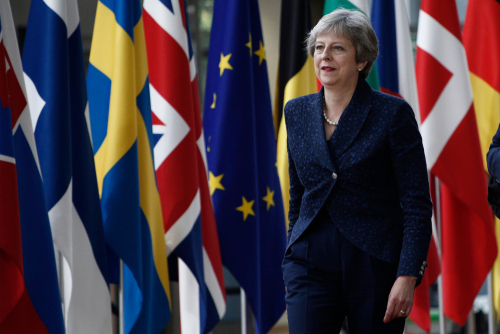 Theresa May calls off MPs’ vote on her Brexit deal

Prime Minister Theresa May has called off Tuesday’s crucial vote on her Brexit deal so she can go back to Brussels and ask for changes to it.

As it stands the deal “would be rejected by a significant margin” if MPs voted on it, she admitted.

But she said she was confident of getting “reassurances” from the EU on the Northern Ireland border plan.

MPs reacted angrily to her announcement with Labour’s Jeremy Corbyn saying she had “lost control of events”.

And European Council President Donald Tusk insisted the remaining 27 EU countries would not “renegotiate the deal”, including the controversial Northern Irish backstop.

However, he said EU leaders would be willing to “discuss how to facilitate UK ratification” of the withdrawal agreement at Thursday’s summit in Brussels.

The prime minister’s U-turn came after she and senior ministers had spent days insisting the vote would go ahead, despite the scale of opposition from MPs being obvious.

In other Brexit developments

Any indication of a new timeline for vote?

Theresa May refused to say when the Commons vote on her deal would now be held – saying it would depend how long fresh talks with the EU last.

Some MPs called for it to come back to the Commons before Christmas, but Mrs May would only say the final deadline for the vote was 21 January.

She said the the UK’s departure date from the EU – 29 March next year – was written into law and the government was “committed” to delivering on it.

Conservative Remainer Justine Greening said she hoped the PM would not wait until 28 March before holding the vote.

Will Labour now table a vote of no confidence in the PM?

Labour leader Jeremy Corbyn had been hoping to force a general election if Mrs May had lost Tuesday’s planned vote, by tabling a vote of no confidence.

In his reaction to Mrs May’s announcement that the vote would be delayed, he urged the PM to stand down because her government was now in “chaos”.

But Labour has rejected calls from the SNP and the Lib Dems to hold a vote of no confidence in the prime minister on Tuesday.

A Labour Party spokesperson said: “We will put down a motion of no confidence when we judge it most likely to be successful.

“It is clear to us that Theresa May will not renegotiate the deal when she goes to Brussels, and will only be asking for reassurances from EU leaders.

“When she brings the same deal back to the House of Commons without significant changes, others across the House will be faced with that reality.

“At that point, she will have decisively and unquestionably lost the confidence of Parliament on the most important issue facing the country, and Parliament will be more likely to bring about the general election our country needs to end this damaging deadlock.”

Dozens of Conservative MPs had been planning to join forces with Labour, the SNP, the Lib Dems, Plaid Cymru and the DUP to vote down Mrs May’s deal.

The Tory rebels and the DUP do not like the Northern Ireland “backstop”, a legally-binding proposal for a customs arrangement with the EU, which would come into force if the two sides cannot agree a future relationship which avoids the return of a visible Northern Ireland border.

Tory MPs say it is unacceptable because it would result in new regulatory barriers between Northern Ireland and the rest of the UK and could continue indefinitely, because the UK would not be able to leave without the EU’s approval.

How did Theresa May defend the delay?

The prime minister vowed to put the deal to a vote but said there was no point at this stage because it would have been defeated.

She told MPs she would be speaking to EU leaders ahead of a summit later this week, about the “clear concerns” expressed by MPs about the backstop.

And she would also be “looking closely at new ways of empowering the House of Commons to ensure that any provision for a backstop has democratic legitimacy”.

Mrs May wants to enable MPs to place obligations on the government “to ensure that the backstop cannot be in place indefinitely”.

She again rejected all other alternatives that have been proposed to her deal – including a further referendum and leaving without a deal.

Her deal “gives us control of our borders, our money and our laws – it protects jobs, security and our Union”, she said.

“It is the right deal for Britain. I am determined to do all I can to secure the reassurances this House requires, to get this deal over the line and deliver for the British people,” she added.

Asked by Lib Dem leader Sir Vince Cable if EU leaders would be ready to ditch the backstop, she said they had shown they were aware of MPs’ concerns that the backstop should be temporary.

“A number of European leaders I’ve spoken to have indicated that they are open to discussions to find a way to provide reassurance to members of this House on that point,” she added.

Leading Conservative Brexiteer Jacob Rees-Mogg said in a statement that Mrs May lacked the “gumption” to put her “undeliverable” deal before MPs.

“This is not governing, it risks putting Jeremy Corbyn into government by failing to deliver Brexit. We cannot continue like this. The prime minister must either govern or quit.”

Mr Rees-Mogg is trying to get enough Tory MPs to submit letters of no confidence in the PM to trigger a leadership contest.

The deputy leader of the DUP – the Northern Ireland party whose backing Theresa May needs to win key votes – Nigel Dodds, said the situation was “quite frankly a bit of a shambles” and the PM was paying the price for crossing her “red lines” when it came to Northern Ireland.

He told Mrs May: “Come back with the changes to the withdrawal agreement or it will be voted down.”

DUP leader Arlene Foster said she had told the prime minister in a phone call that the “backstop must go”.

What is the EU saying?

Theresa May’s deal has been agreed with the EU – but it needs to be backed by the UK Parliament if it is to become law ahead of the UK’s departure.

Mrs May has also been speaking to EU leaders about re-opening the withdrawal agreement, something both sides have previously ruled out.

“As President Juncker said, this deal is the best and only deal possible,” she said.

The BBC’s Brussels reporter Adam Fleming said Mrs May was “trying get more legal oomph behind the language” in the withdrawal agreement about the EU using “best endeavours” to get a trade deal which would remove the need for the backstop to be used.