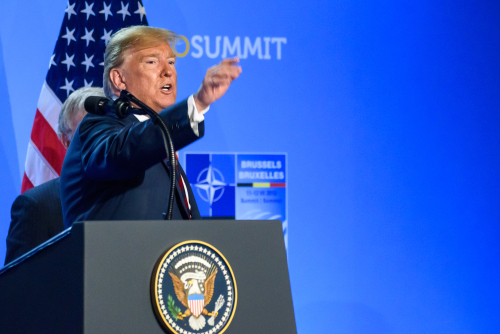 President Donald Trump threatened Tuesday to shut down the government over his demand for a multi-billion dollar border wall during a remarkable televised clash with the top House and Senate Democrats in the Oval Office.

Trump traded taunts and threats with Senate Minority Leader Chuck Schumer and House Minority Leader Nancy Pelosi, a sign of what divided government in Washington could look like once Democrats take over the House next month.
Trump repeatedly touted the importance of securing funding for border wall construction and was rebuffed by the Democratic leaders who made clear that they would hold Trump responsible if the government shuts down later this month. Trump accepted ownership, telling the Democrats he would be “proud” to shut down the government over border security.
“I’ll tell you what, I am proud to shut down the government for border security, Chuck,” Trump told the top Senate Democrat. “So, I will take the mantle. I will be the one to shut it down. I’m not going to blame you for it.”
Trump did not shed his bravado when he reinvited cameras into the Oval Office later Tuesday afternoon, maintaining that he is happy to take responsibility over a government shutdown.
“I don’t mind having the issue of border security on my side. If we have to shut down the country over border security, I actually like that,” Trump said, even as he characterized his meeting with Schumer and Pelosi as “friendly.” “It’s something the country needs. It’s common sense. The country needs it.”
While the parameters of the political impasse have been known for months, the scene inside the White House Tuesday was a new escalation between emboldened Democrats, who will have the House majority starting in January, and Trump regarding his signature campaign promise. The deadline for funding is December 21.
Even as Trump pressed Democrats for border wall funding, he once again claimed during a private portion of his conversation with Pelosi and Schumer that Mexico would be paying for the wall — albeit indirectly — Pelosi told members of her conference later Tuesday.
“He says, ‘Mexico is going to pay for the wall.’ I said, ‘They’re not paying for the wall.’ He said, ‘They’re paying for the wall with the money we’re gonna make over the newly revised USMCA,'” Pelosi told Democrats, according to an aide in the room. “I said, ‘That isn’t the fact. I’m gonna go out and tell people that you think that Mexico is paying for it with money that should be going into our economy.’ “
No progress toward averting a shutdown appeared to be made following the meeting, which for a sizable part was broadcast live around the world and featured the President and the heads of the opposing party openly interrupting each other to question motives and dispute facts.
Schumer has urged Trump to either accept the Senate’s bipartisan agreement to spend $1.6 billion to boost border security measures, or agree to a one-year spending resolution that would keep those funded at the current level of around $1.3 billion. Schumer said last week that money can be used for fencing and other features, rather than “to construct any part of President Trump’s 30-foot-tall concrete border wall.”
“If he sticks to his position of a $5 billion wall, he will get no wall and he will get a shutdown,” Schumer said as he left the White House.

The sparks started to fly after Pelosi characterized the possibility of a partial shuttering of the federal government as a “Trump shutdown,” a term Schumer also used.
Trump also claimed that he had the political momentum given that Republicans expanded their majority in the Senate, leading Schumer to take a jab.
“When the President brags that he won North Dakota and Indiana, he’s in real trouble,” Schumer said.
After the meeting, Schumer said he had not expected the reality TV atmosphere of the event and put the pressure to act on Trump.
“It’s up to the President. We don’t want it,” Schumer said of the shutdown. “We gave him a good plan not to shut down the government and it will be a Trump shutdown and then on January 3rd, if it happens, the House will open us up again.”
The easiest solution for Congress to avoid a shutdown and get out of Washington before the Christmas holiday could be to avoid the issue altogether and pass a short-term resolution to extend the rest of the federal government’s spending into next year when Democrats take over the House. But Sen. John Cornyn, a top Republican, said Monday he didn’t expect Trump to agree to that.
“That really just postpones the pain, it doesn’t really solve the problem,” said Cornyn in advance of the meeting, explaining that Trump still wouldn’t get the wall funding he wants in that scenario.

Several GOP senators expressed concern about the prospects of a government shutdown after the meeting.
“We night come together, we might not,” said Senate Appropriations Chairman Richard Shelby. Asked about Trump’s comment that he would be “proud” to shut down the government, he said, “I’ve never said that myself. I’ve always worked to fund the government.”
“I’m really concerned about always a government shutdown,” said Sen. Shelley Moore Capito, a West Virginia Republican.
Others believed Trump was goaded by Schumer into saying he would be proud to shut the government down.
“I think Sen. Schumer was very shrewd in his efforts to make sure whatever blame exists with the shutdown doesn’t rest with the Democrats,” said Sen. Jerry Moran, a Kansas Republican who also said there should be some “give and take” in the talks including from Trump.
But some like his ally, Lindsey Graham, a South Carolina Republican, urged Trump to “dig in.”
“He needs to dig in and not give in,” Graham said. “I think what he is proud of is standing up to the status quo. People elected him expecting him to be different. We are talking about a small amount of money In a multi-trillion dollar budget.”
Complaining Pelosi will not accept a deal for addressing recipients of the Deferred Action for Childhood Arrivals program in exchange for wall money, Graham said: “This liberal arrogance and I have had enough of it. Take it on, stare it down. See what happens.”

Political pressure over the wall

Despite current Republican control of the House and Senate, Trump has little leverage to force Congress into appropriating money for the border wall. While “Build the Wall!” was perhaps Trump’s most indelible campaign promise, Republicans in Congress are broadly less enamored than he is with the prospect of building it and Democrats still control enough seats in the Senate to block it.
For months, Trump’s frustration at Congress’ response to his demand has spilled out into public. From July through September, Trump repeatedly said he’d be willing to shutdown the government over the wall, backtracked and then reiterated he would do it because he views it as a political boost. Few on Capitol Hill agree that Republicans would politically benefit should parts of the government shut down.
Democratic leaders and the President appear to be far apart on the issue even though warning signs of the spending showdown have been flashing for so long.
Last week, Pelosi called the proposed wall “immoral, ineffective and expensive,” while Trump claimed that the country would save billions of dollars if Congress would pass a bill to build it.
“Either way, people will NOT be allowed into our Country illegally,” Trump tweeted. “We will close the entire Southern Border if necessary.”
This story has been updated with additional developments and will continue to update throughout the day on Tuesday.