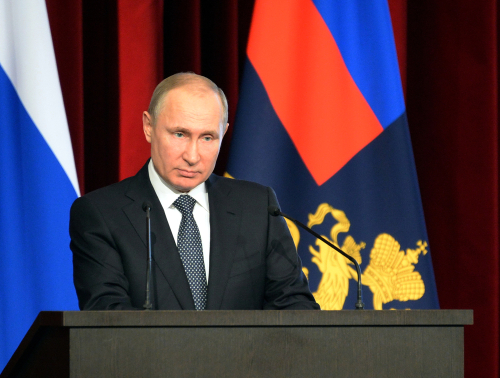 Russia’s President Vladimir Putin has accused the UK and US political classes of “disrespecting” the public by questioning the Brexit referendum and Donald Trump’s election.

“The same in Britain: Brexit happened, but no-one wants to implement it.”

He also warned that the world was becoming complacent about the risks of nuclear war.

The president’s comments came at his year-end press conference in Moscow.

Russia’s leader also said British Prime Minister Theresa May has no choice but to follow through with Brexit, as failing to do so would undermine UK democracy.

“She must enact the will of the people, expressed during the referendum,” he said. “Or otherwise it is not a referendum at all: doing it over and over again if someone did not like it [the result]. Is it a democracy?”

Mr Putin described relations with the UK as in “deadlock,” saying it was in both countries’ interests to improve matters.

“Are we interested in restoring full relations with Britain? Yes, we are interested,” he said. “And we know that British [companies] work pretty actively here.”

The UK is one of a number of Western countries that have enacted economic sanctions against Russia over its annexation of the Ukrainian territory of Crimea and the nerve agent attack on former Russian spy Sergei Skripal in southern England.

These are strange times. Today I watched the leader of an increasingly authoritarian Russia lecturing the West on the true meaning of democracy.

President Putin’s message was basically this: You don’t like Trump? Tough. The American voters elected him.

You don’t like Brexit? Tough again. The British people voted for it.

This from a political leader who, famously, created a system of “managed democracy” in Russia (in which the Kremlin does all the managing).

At times, the news conference looked and sounded more like a circus – journalists shouting at the tops of their voices to attract the attention of the Kremlin “ringmaster” up front to get a question. At one point, President Putin had to ask everyone to calm down.

By the end of the “show” my arm was aching. I’d been holding up a BBC News sign for nearly four hours. Sadly, the president didn’t take my question.

I had planned to ask about the Salisbury poisoning. Next time, perhaps…

Mr Putin also addressed his country’s strained ties with the US, saying he did not know if he would meet President Trump soon or not.

“We must normalise our bilateral relations; we are ready for this, as soon as the other side is ready too,” he said.

Washington has invited the Russian leader to visit in 2019, but such a visit could prove controversial because US intelligence agencies have concluded that Moscow meddled in the 2016 US presidential election in favour of Mr Trump.

At a summit in July of this year in Finland, Mr Trump was heavily criticised for appearing to back Mr Putin’s denials of election interference over his own intelligence agencies’ assessments. Mr Trump later said he “misspoke”.

Mr Putin’s comments came a day after the US Treasury said it would lift sanctions on the aluminium businesses of Russian oligarch Oleg Deripaska, one of 24 Russian businessmen targeted by the US authorities, after he reduced his stakes in the firms. Mr Deripaska, a political ally of Mr Putin, remains under sanction.

Turning to the threat of nuclear war, Mr Putin said: “The danger of such a scenario is getting obscured and receding… if something like this were to happen – God forbid – it can lead to the demise of the whole civilisation or possibly the planet.

“These questions are serious, and it’s a great shame that this tendency to underestimate does exist and is even getting worse.”

He also criticised President Trump’s plan to withdraw from a key nuclear treaty with Russia.

“We are essentially witnessing the breakdown of the international arms control order and (the start of) an arms race,” he said.

Mr Trump said the US would pull out of the 1987 Intermediate-Range Nuclear Forces (INF) treaty because Russia had “violated” it.

“What’s going to happen?” said Mr Putin. “It’s difficult to imagine how the situation will develop further. If these rockets appear in Europe, what should we do? Of course we have to respond.”

Russia’s president also accused the US of having world domination on its mind.

On Wednesday, Mr Trump announced that he would withdraw US troops from Syria, saying Islamic State forces had been defeated there.

Mr Putin cautiously welcomed the move, but questioned whether it would actually happen.

“We don’t see signs of a pullout,” he said, adding that the US “has been in Afghanistan 17 years, and they always say they’re withdrawing”.