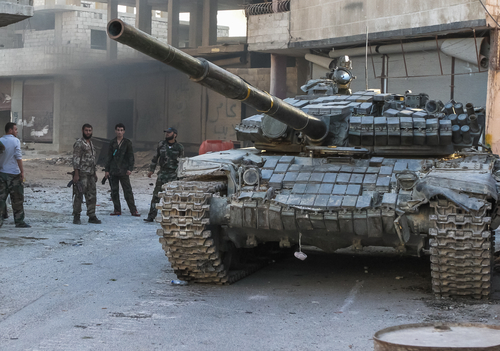 A top Republican has said US President Donald Trump remains committed to defeating Islamic State (IS) in Syria, despite his plan to withdraw US troops.

Senator Lindsey Graham suggested the withdrawal had been slowed and he was now reassured of the president’s commitment after meeting him on Sunday.

The White House has yet to comment on Mr Graham’s remarks.

“I think we’re in a pause situation where we are re-evaluating what’s the best way to achieve the president’s objective of having people pay more and do more,” Mr. Graham said.

He did not explain this, but The New York Times reports that he may be referring to assurances given to military officials that they can have longer than 30 days to ensure an orderly withdrawal of troops.

On 19 December, Mr Trump announced the pullout of some 2,000 troops, asserting that IS had been defeated.

Critics of the plan dispute this claim, arguing the move could lead to a resurgence of IS which would hurt national security.

US troops have helped rid much of Syria’s north-east of the jihadist group, but pockets of fighters remain.

Two people have resigned since the decision was announced – Defence Secretary Jim Mattis and a top US official in the fight against IS, Brett McGurk.

What did the president tell Senator Graham?

Lindsey Graham, who had earlier called the withdrawal decision a “huge Obama-like mistake”, told journalists: “The president assured me he is going to make sure he gets the job done.

“He promised to destroy Isis. He’s going to keep that promise.

“I think we’re slowing things down in a smart way,” the South Carolina senator said.

BBC defence correspondent Jonathan Marcus suggests that Mr Trump appears to be washing his hands of Syria and handing the whole job over to Russia, Turkey and Iran.

Speaking later on CNN, Mr Graham also expressed concern that the US withdrawal would leave “our allies the Kurds” in the north of Syria exposed to attacks from Turkey.

“If we leave now, the Kurds are going to get slaughtered,” he said. “The president is reconsidering how we do this. He’s frustrated, I get that.”

What is the US presence in Syria?

US ground troops first became involved in Syria in autumn 2015 when then-President Barack Obama sent in a small number of special forces to train and advise local Kurdish fighters who were fighting IS.

The US did this reluctantly after several attempts at arming anti-IS groups had descended into chaos.

Over the intervening years the numbers of US troops in Syria increased, standing today at some 2,000, though some estimates place the number perhaps even higher.

A network of bases and airstrips has been established in an arc across the north-eastern part of the country.

The US has also been part of an international coalition conducting air strikes against IS and other militants.