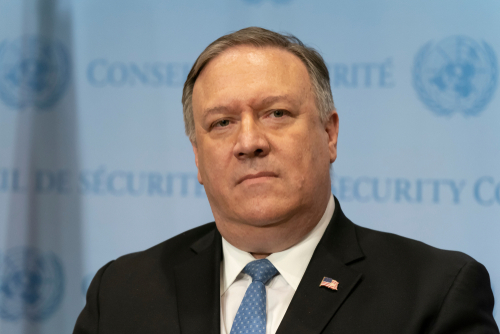 US to expel every last Iranian boot from Syria – Pompeo

The US will work with allies to “expel every last Iranian boot” from Syria, Secretary of State Mike Pompeo says.

Mr Pompeo warned there would be no US reconstruction aid for areas controlled by Syrian President Bashar al-Assad until Iran and its proxies had left.

Mr Pompeo was speaking in Cairo three weeks after President Donald Trump said US troops were pulling out of Syria.

The announcement had shocked US allies and sparked strong criticism in Washington.

Mr Pompeo, who has been seeking to reassure allies following Mr Trump’s surprise announcement, said: “America will not retreat until the terror fight is over. We will labour tirelessly alongside you to defeat Isis [the Islamic State group], al-Qaeda and other jihadists that threaten our security and yours.”

He said that the US was a “force for good” in the Middle East, adding: “Where America retreats, chaos follows.”

Why did Pompeo mention Iran?

Iran, alongside Russia, has been supporting the Syrian government in the Syrian civil war, providing arms, military advisers, and reportedly combat troops.

The US is deeply suspicious of Iranian activity in the Middle East and views it as a destabilising force in the region.

It is also an ally of Israel and Saudi Arabia, two of Iran’s foes.

On Thursday, Mr Pompeo said: “We will not ease our campaign to stop Iran’s malevolent influence and actions against this region and the world.”

He added that American sanctions against Iran were “the strongest in history and will keep getting tougher”.

How did Pompeo criticise Obama – and why?

Mr Pompeo did not directly name Mr Trump’s predecessor. However, he referred frequently to a key speech Mr Obama gave in Cairo in 2009, where he had called for “a new beginning” for the US and the Middle East.

Mr Pompeo said: “In this very city, another American stood before you. He told you that radical Islamist terrorism does not stem from ideology… He told you that the United States and the Muslim world needed ‘a new beginning.’ The results of these misjudgements have been dire.”

“We were timid about asserting ourselves when the times – and our partners – demanded it,” he said.

The Trump administration has been critical of Mr Obama’s decision to strike a deal to limit Iran’s nuclear activities, and had accused him of being too soft on Islamist terrorism, and a poor ally to Israel.

“That this administration feels the need, nearly a decade later, to take pot-shots at an effort to identify common ground between the Arab world and the West speaks not only to the Trump administration’s pettiness, but also to its lack of a strategic vision,” it said in a statement

“Together with the broader administration he represents, Pompeo sees Islam as an enemy, human rights as a side concern, and autocrats worthy of embrace,” the group added.

‘Barely a mention of democracy’

Mike Pompeo framed his speech as the anti-Obama policy – a return to a strong US that wasn’t afraid to help its friends and be more proactive as “a force for good”.

He accused the former president of underestimating the viciousness and tenacity of Islamist extremism and said his timid approach to the Middle East had both emboldened Iran and contributed to the rise of Islamic State militants.

His argument ignored the fact that Mr Obama’s Cairo speech was trying to repair damage with the Muslim world wrought by the wars of George W Bush.

Nor did it signal a new interventionism: Mr Pompeo insisted President Trump was committed to fully dismantling Islamic State despite his decision to pull US troops out of Syria, but wanted partners play a bigger role.

And unlike his Republican predecessor Condoleezza Rice, who also took a turn at the Cairo podium, he made barely a mention of democracy.

In essence his speech was a clear declaration that the Trump administration’s top priority would be to counter Iran, as well as protect Israel, and suggested that would be the benchmark for judging America’s still largely authoritarian Arab allies.

What is the US approach to Syria?

The US, along with Turkey, Gulf Arab states, and Jordan, has been supporting some rebel groups.

Some 2,000 US military personnel are reported to be in Syria, and have been involved in fighting Islamic State militants.

In December, Mr Trump said he was withdrawing all remaining troops because IS had been “defeated”, adding “they’re all coming back and they’re coming back now”.

Since then, US officials have appeared to row back slightly on the decision. Mr Trump said the troops would be pulled out “slowly”, while National Security Adviser John Bolton said the withdrawal would depend on certain conditions.

Analysts have described the administration’s Syria policy as “messy” and confusing for allies.

Mr Pompeo’s Thursday speech appeared to be an attempt to reassure partners, while also reiterating Mr Trump’s decision to pull out troops.

“President Trump has made the decision to bring our troops home from Syria… but this isn’t a change of mission. We remain committed to the complete dismantling of the Isis [IS] threat,” he said.

Other stops in Mr Pompeo’s Middle East tour will include Saudi Arabia, Bahrain, Qatar, and the UAE.