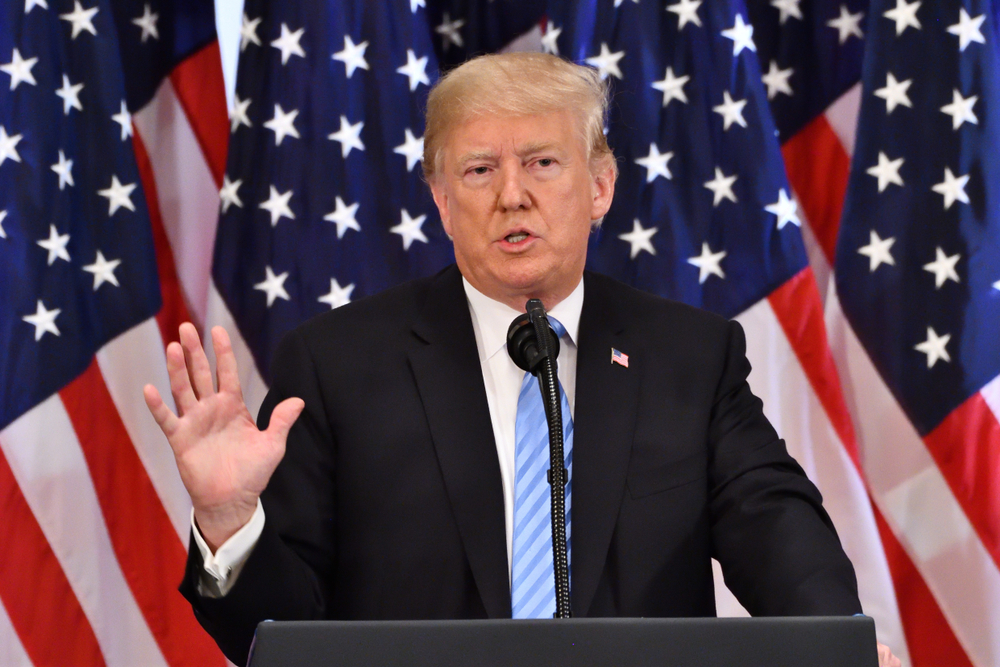 Trump lashes out at ‘treasonous’ officials after McCabe interview

US President Donald Trump has issued an angry response after a TV interview on Sunday alleged that officials had held discussions to have him removed.

Mr Trump tweeted of “illegal and treasonous” behaviour and an “illegal coup attempt”.

In the interview, ex-acting FBI chief Andrew McCabe said talks had been held in 2017 about invoking a clause that can remove a president deemed unfit.

The Senate Judiciary Committee chairman has vowed to investigate the claims.

Lindsey Graham said the claims were an “attempted bureaucratic coup”.

Mr McCabe said Deputy Attorney General Rod Rosenstein had held discussions on the number of cabinet members and others needed to invoke the clause, the 25th Amendment of the US Constitution.

How has Mr Trump responded to the claims?

In a series of tweets on Monday morning, he condemned “so many lies by now disgraced acting FBI Director Andrew McCabe. He was fired for lying and now his story gets even more deranged.

“He and Rod Rosenstein, who was hired by [then Attorney General] Jeff Sessions (another beauty), look like they were planning a very illegal act, and got caught.”

Mr Trump added: “There is a lot of explaining to do to the millions of people who had just elected a president who they really like and who has done a great job for them with the military. Vets. Economy and so much more. This was the illegal and treasonous ‘insurance policy’ in full action!”

The president quoted a comment on the Fox and Friends programme saying this was “an illegal coup attempt”, adding “True!”

The White House said Mr McCabe, who was fired last year for allegedly lying to government investigators, had “no credibility”.

What’s the background to this?

However, Mr McCabe’s quotes are the first to be made on the record from someone present at the meeting where the alleged comments were reportedly made – in May 2017, after Mr Trump fired FBI director James Comey.

“The discussion of the 25th Amendment was simply [that] Rod raised the issue and discussed it with me in the context of thinking about how many other cabinet officials might support such an effort,” he said.

Mr McCabe also said Mr Rosenstein was openly “counting votes, or possible votes” and that he was “very concerned” about the president “his capacity and about his intent at that point in time.”

“To be fair, it was an unbelievably stressful time… it was really something that he kind of threw out in a very frenzied chaotic conversation.”

Mr Rosenstein has previously strongly denied having such discussions, saying there was “no basis” to invoking the amendment.

What else did Mr McCabe say?

In the 60 Minutes interview, aired on Sunday, Mr McCabe also covered allegations Mr Rosenstein had offered to secretly record Mr Trump, amid concerns about possible obstruction of justice relating to the investigation into alleged collusion between the president’s campaign team and Russia.

When the allegations first emerged in the New York Times, Mr Rosenstein said the report was “inaccurate and factually incorrect”.

A source told the BBC at the time that Mr Rosenstein’s comment “was sarcastic and was never discussed with any intention of recording a conversation with the president”.

However, Mr McCabe said that Mr Rosenstein “was not joking. He was absolutely serious”.

“It was incredibly turbulent, incredibly stressful. And it was clear to me that that stress was – was impacting the deputy attorney general.”

He added: “I never actually considered taking him up on the offer.”

What was Sen Graham’s response?

He described Mr McCabe’s comments as “stunning” and pledged to hold a hearing at the Senate Judiciary Committee to determine “who’s telling the truth”.

H said he could issue subpoenas – a court order forcing a witness to appear to give testimony – “if that’s what it takes”.

The powerful committee he chairs oversees the US judiciary.

What is the 25th Amendment?

It provides for the removal of a president if he or she is “unable to discharge the powers and duties of office”. What this exactly means is open to interpretation.

Duties are transferred to the vice-president.

Activating the relevant section of the 25th Amendment would require the approval of eight of the 15 members of Mr Trump’s cabinet, the vice-president and two-thirds majorities in Congress.

Ronald Reagan and George W Bush used the amendment to temporarily transfer power when they were medically anaesthetised.

Who is Andrew McCabe?

He took over as acting director of the FBI in 2017 and was himself fired as deputy director in March last year just two days before he was due to retire.

He was sacked by Jeff Sessions, who said an internal review had found he leaked information and misled investigators.

Mr McCabe denied the claims and said he was being targeted because of his involvement in the Russian collusion inquiry.

He has now written a book on his time in his posts.