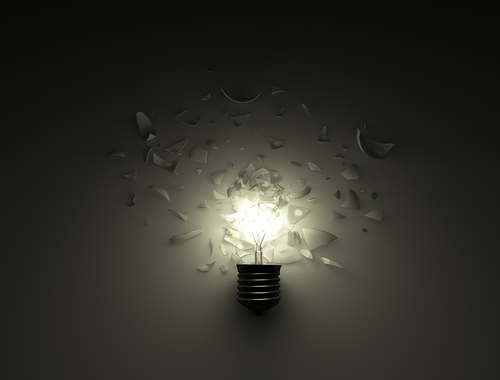 A case for innovating without the blindfold

Picture this: they were some of the smartest minds in the world working in NASA. They completed the first lunar vehicle and send it to space and encountered a serious issue: the light bulbs kept exploding.

They spent considerable time and money trying to solve this issue by reinforcing materials or changing the design until one day a bright spark (no pun intended) suggested they might just remove the glass! The issue was solved immediately.

Well, in fact, the problem is just that: When we were designing for the moon we embedded what we have on earth. Or to put it differently, NASA had a redundant component in their blueprint but someone had to break their fixedness for them to be able to see it.

The reason even we non-NASA folk constantly waste time and money on unnecessary iterations is a powerful bias called cognitive fixedness.Cognitive Fixedness is a state of mind in which it is easy and natural to perceive aspects of the world in a particular way and very difficult to see them any other way.

Cognitive Fixedness can be based on assumptions, considered to be facts, beliefs accepted without questioning and tendencies that we fail to challenge. The fixedness phenomenon is extremely common, because it is so efficient: it allows us to perceive, recognise and interact with familiar objects and situations based on past experience, rather than requiring a new analysis of every object with which we come in contact. It helps our survival.

The problem with cognitive fixedness is that it translates as a set of practices that serve us all very well on a daily basis but when we need to think creatively (and who doesn’t?) it becomes a barrier because it makes it difficult to imagine doing different things or doing things differently. Like the team with the light bulbs, we struggle to imagine alternatives. Try telling an HR Manager to move a step in his recruitment process or a CFO that the last step in their procurement process could become the first and you’re sure to be butting up against their fixedness! Both are likely to fall into ‘blueprint thinking’.

When organisations fail to recognise and deal with bias, they may as well innovate with a blindfold.

If you want to eliminate cognitive fixedness, there are 5 key steps:

1. Don’t rely on processes in innovation. You need to help people THINK DIFFERENTLY. Innovation is an inside job.

2. Ensure that you have a diverse team around the table from across the organisation. You don’t want like-mindedness!

3. Impose constraints on the thinking process to make you more resourceful and work more systematically with the resources you already have.

4. Learn about thinking tools that are derived from patterns to the most inventive ideas.

5. Learn to work in the opposite direction: from Form to Function, so that we can’t embed our blueprint thinking into the ideas at the outset.

The result of removing the blindfold? Ideas that are more counter-intuitive, less biased and more viable.