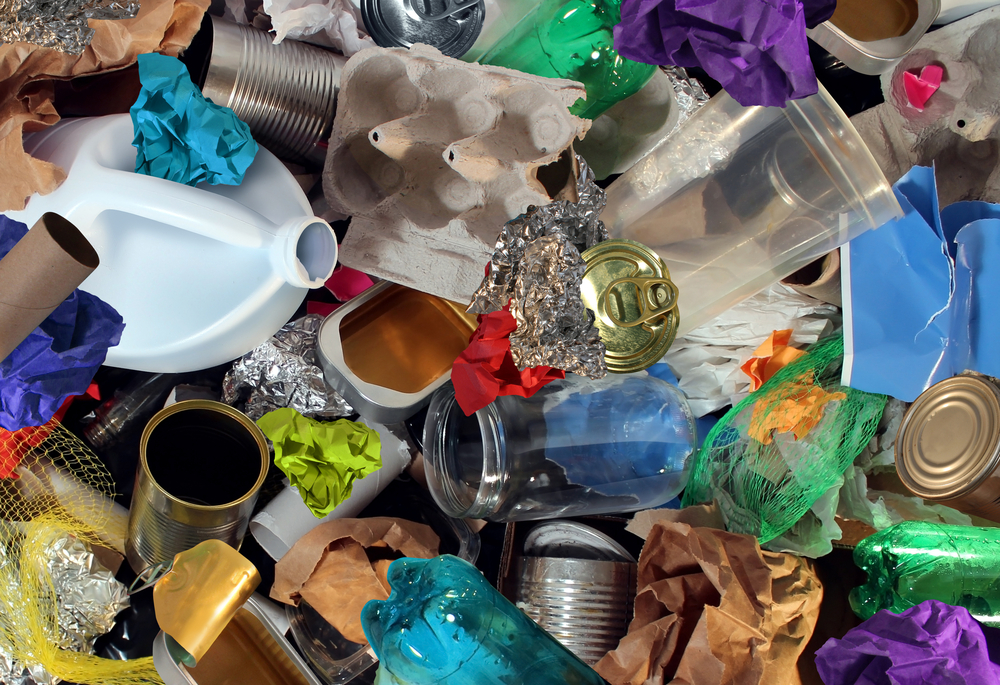 Glass, paper might no longer be recycled in Tucson

The glass bottles and newspapers that Tucsonans have put into blue recycling bins for decades may soon be heading to the landfill.

Because of sharply escalating financial losses in the city’s recycling program, officials say it might have to stop taking these recycling mainstays until markets recover nationally or globally.

The markets for these products have collapsed in the past 18 months because of a Chinese crackdown on recyclable imports and continued declines in glass and paper recycling industries in this country.

Officials also are considering scaling back recycling collections to twice monthly from weekly, and raising monthly recycling fees charged to homeowners. The 45-cent fee could be raised by 30 cents, to 75 cents.

The cutbacks and higher fees could go into effect in July if the Tucson City Council approves a recent recommendation from a city advisory committee. The council will discuss recycling in detail at its April 23 meeting.

In interviews, Mayor Jonathan Rothschild and three council members said they’re not thrilled with any of the proposed solutions, particularly discontinuing glass and paper recycling.

The council members generally agreed with Rothschild’s statement: “I want to be really cautious and really give it a lot of thought before we jump into anything.” The city needs to deal with the acute economic problems now and look at broader solutions for the long term, the mayor said.

Ultimately, “the city, private companies and the environmental-service industry will have to start looking at a new way of doing business,” he said.

At the same time, “We have to keep in mind, the market could shift. Let’s not go ape and kind of drop-kick our whole program like other jurisdictions are doing, then find out in two to three years that if we had been a little more patient, things would resolve,” he said.

City leaders are searching for alternatives, although they acknowledge the choices aren’t great.

“It’s a problem all across the country. Some cities are just throwing paper and glass away,” Councilman Paul Durham said. “I don’t like the choices because people like to recycle. They like to believe that by recycling they are helping the environment.

“The problem is sometimes it doesn’t make sense economically. Sometimes cities pay more to recycle than if they put it in the landfill.”

If current trends in recycling continue, fees may have to rise another 75 cents yearly over the next five years, said Kris Yarter, chair of the Environmental Services Advisory Committee, which recommended the higher fees and program cuts.

“We are not dying to increase fees, but we want recycling to continue. The only way to keep it continuing is to focus on the recycling materials that (the city) can profit from,” Yarter said. “This is the worst possible scenario. Things can change. We are looking at how we can make recycling more profitable.”

She said, for instance, that the committee was willing to keep taking aluminum and metal cans, cardboard and large plastic bottles and jugs for recycling because the markets for those items are good.

But other plastics, such as yogurt and margarine tubs and berry containers, “we’re talking about eliminating those because nobody wants them,” she said.

In fact, as far as she knows, those plastic products are already sent to the landfill now after being taken to the city’s recycling processing center, she said. But Cristina Polsgrove, a city Environmental Services Department spokeswoman, said her understanding is that they’re not going to the landfill.

As for a cutback in recycling pickups, Polsgrove noted that field research conducted for the city of 1,717 blue bins from December 2017 to May 2018 found that most barrels were put out only half full anyway.

“This is where meeting the needs of the environment and the economics of the situation come up against each other.

Recycling’s collapse in the U.S. started when China slapped a ban early last year on accepting 24 varieties of recyclable plastic and paper products. It began to require that acceptable products contain no more than 0.5 percent contamination, including nonrecyclable items and by food products — for example, sauce and cheese that stain pizza boxes. Previously, China accepted materials with 3 to 5 percent contamination.

Recycling problems only worsened this year.

A week ago, the Sunday New York Times reported that city and county recycling programs are collapsing around the country. Hundreds of towns and cities across the country have canceled recycling programs, limited materials they collect or increased fees, the paper reported.

In Tucson, China’s cutbacks have particularly had an influence on the marketability of paper.

The U.S. used to have numerous paper mills to recycle newsprint and other paper. Used paper was once recycled at a paper mill in Snowflake in Northern Arizona’s Navajo County. But the mill’s 2012 closure was one of several in the U.S. due to foreign competition, particularly from China. Now, the Chinese import ban has frozen the paper market here.

“It was really hard to let go of paper, trust me,” said the advisory committee’s Yarter. “That was dragged kicking and screaming out of us. But it’s also something that has a lot of contamination, including grease and food. It’s been out in the rain, too.”

As for glass, when recycled, “It hasn’t been worth anything for a long time. It doesn’t make any money, just because it’s so heavy to haul around,” Yarter said.

Tucson isn’t close to any glass manufacturer, limiting recycling options, said Garcia. Glass has been ground up and mixed with tar to create “glassphalt” for roads and parking lots, but that hasn’t worked as well as on the East Coast, she said.

Glass can be broken into pieces to hold down dust at the landfill, but, “Until we can find someone that comes up with a machine to extract silica from the glass to do something major in the states, there’s no value in it,” Yarter said.

Increased processing costs for recycling due to contamination problems have also hurt the program’s financial picture.

Recently, Tucson and Republic Services, a giant trash and recycling company that runs the recycling center, negotiated a nearly 33 percent increase in what the city pays Republic to take recyclables, from $37 to $49 a ton.

Also pushing up costs could be a possible rising rate of contamination of the recyclables. The rate was 22 percent last summer, but more recently ranged from 28 to 32 percent, audits of the city recycling program have found.

That’s despite continued efforts by city officials to educate the public about what should and shouldn’t go into the bins, along with an ongoing series of Arizona Daily Star articles on that topic (today’s is on Page C2).

“People have gotten really sloppy. We have an area of high turnover. People come and go a lot in Tucson and you need to be constantly educating people,” Garcia said.

The city’s recycling center, which is relatively new, is also part of the contamination problem, she said. It has all kinds of “bells and whistles,” including an automated sorting system that includes fans to blow plastics and big magnetic devices to draw metal cans into bins, she said.

Because the system is set for certain kinds of containers, if a particular plastic bottle is flat instead of round, the fan’s wind may not pick it up and it could continue down the recycling line into a trash bin. Overall, the automated system makes contamination a bigger problem than if the recyclables were hand-sorted, Garcia said.

Councilman Paul Cunningham said he’d like to see if the city can lower contamination rates by simplifying the number of things it recycles and by promoting standard recycling rules such as keeping food and liquids out of the bins.

“There’s so many things we were taking, that people thought you could recycle anything. That wasn’t the case. We need to kind of reset the program. Once the markets come back, we can probably reinitiate the program as it was.”

Samantha Harris, a University of Arizona professor, said she was “really saddened” to learn of the potential for recycling cuts. Most people she knows take pride to think at least some of their wastes are recycled. She and her family recycle “as much as we can, anything we can save, that we can clean.”

But she’s also horrified by the large amount of plastics people use.

“We need to get away from that. It would be worthwhile to develop additional technologies to combat that,” said Harris, an associate professor of cellular and molecular medicine.

If the council proposes cutting recycling services, Lissa Fogel, treasurer of the Barrio Blue Moon Neighborhood Association, will speak out at a council meeting. It would upset her if some products can’t be recycled, she said.

“I understand that there are challenges. I don’t think that stopping recycling is necessarily the first best option. What happens in other cities? Has Tucson benchmarked what other cities have done to improve rates of contamination?”

Rothschild says some sort of multi-stream recycling collection system, using maybe four separate bins, could work as a long-term solution. Home recyclers would separate items into the four bins to keep one material from contaminating another.

“There will be an initial capital cost to do that. I don’t know, it’s extreme. Maybe you share those in neighborhoods.

“What a couple of cities have gone to,” instead of saying everybody gets a bin, maybe four houses along the block get four bins and they share.

“It’s a good way to help neighbors to get along.”

However, in the short term, he’s also been hearing that putting glass and paper into landfills doesn’t do much to shorten a landfill’s life because they both decompose relatively quickly.

Obviously, it’s better from an energy use standpoint to recycle glass than to make it fresh from raw materials, he said.

Other solutions could be simply to store some of those materials until markets improve, he and some council members said.

Kozachik says that everyone, not just household customers, will have to be part of the solution. For one, Republic Services, which runs the city recycling center, could be hit for higher tipping fees to dump the trash it gathers from suburbanites and commercial customers into Los Reales Landfill, he said.

“If we remove glass, that saves us $500,000. What would an increase in Republic’s tipping fee do to offset that glass savings?” he asked.

Commercial customers might also be asked or required to pick up some of the recycling costs, Kozachik said.

“People are not going to want to see we’re increasing your costs and reducing your service.”